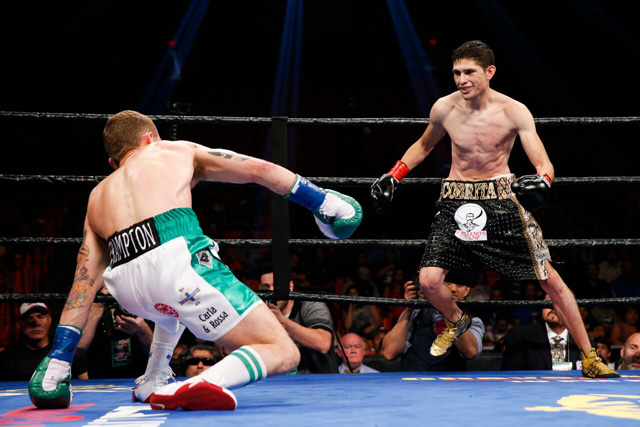 ALEJANDRO GONZALEZ JNR, 22 years old, surprised everyone with his spirited and brave challenge of IBF super-bantamweight champion Carl Frampton on Saturday night in El Paso. The son of a former featherweight world ruler, Gonzalez Junior scored two knockdowns over Frampton and battled all the way to the final bell.

“Cobrita” met up with Frampton in the hotel lobby shortly after the exciting fight and the two have plenty of mutual respect for one another. And, despite the toughness of the fight, Alejandro also found time to speak exclusively with Boxing News:

Q: You told me a couple of months ago how the fight would be a war and it was indeed a great fight. How are you feeling, less than 24 hours after such a tough fight?

Q: Have you had a chance to watch the fight on tape yet? You said immediately afterwards how you felt you won the fight.

A.G: “After the fight, I met Frampton in the lobby, we’re good friends now. I’ve not had a chance to see it yet. But honestly, lots of people are telling me I won the fight, I won, I won. But I’m not going to cry or make any excuses, I’m not that type of fighter. I lost the fight but I feel I won lots of things. They all know who I am now. I accept the loss, even if the judges did exaggerate [the scores]. If I did lose, I didn’t lose by that many points.  But Frampton is a good guy, he told me he didn’t think a kid like me – and I am a kid – could hit so hard. Man, it felt so good to hear a world champion say such good things about me. I will just carry on and keep learning.”

Q: Were you surprised yourself when you knocked him down twice in the opening round?

A.G: “I wasn’t surprised, because I said at the press conference before the fight how I am a hard hitter, even if I don’t look like it. I’m skinny and I’m still young. But he’s a good champion and he knew how to survive. I tried to KO him, I knew that was the only way I could win the fight. I’m an 118-pounder really, not a 122. Again, not to make any excuses, but I messed my hand up with the second knockdown. It might be broken, I don’t know. It’s really fat right now. Maybe, if my hand was okay, it might have made a bit of a difference and I could’ve stopped him. It will remain a mystery. But my dad [Alejandro Gonzalez Senior, former WBC featherweight champ], he told me I had to stand on my own, be on my own, to make my own history.”

Q: Did Frampton ever seriously hurt you?

A.G: “Not to exaggerate, but not even Mike Tyson could have stopped me. I was well prepared and I was so hungry. I wanted that title so bad! I took so many punches, but never once was I dizzy or hurt. Frampton told me himself how he couldn’t believe I could take so many punches. Whenever he hit me, I smiled at him and said, ‘come on!’”

Q: Do you still want a rematch or will you drop down to 118-pounds?

A.G: “I did tell Frampton I wanted a rematch and he told me no way! He told me I’m on his level, that I’m not below him, but at the same level. He told me I’m strong and a hard hitter and he told me to go down to 118 and that I’ll smash everybody there. I think we’ll go our separate ways. I’ll be a monster at 118.