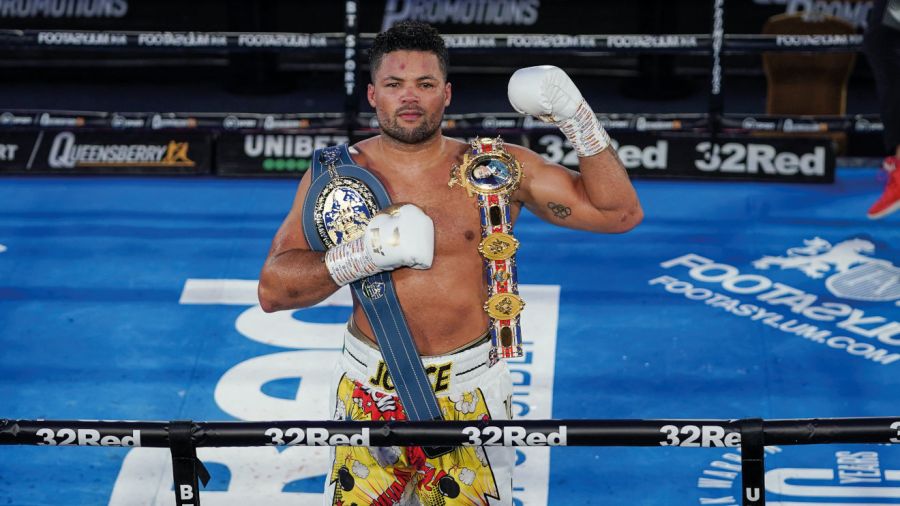 In his own words, Joe Joyce explains why it's a mistake to underestimate him

IT was a kick in the teeth when Ismael Salas went down with Covid and to find out he wouldn’t be able to be in my corner. But I did a lot of work with Steve Broughton in the camp and he knew the gameplan and I felt comfortable and happy. Salas had come over for a bit but then he had to go again. I was training with Steve throughout the whole camp so I wasn’t going to pull out of the fight because Salas wasn’t going to be in my corner. Salas had been able to get to work on the gameplan and what I needed to do in this fight so then it was working with Steve on what we needed to do and I was happy that I could do it without him being there in person. I knew what I had to do and I’ve got a good team around me so I was confident in my ability.

Steve is a great trainer, does great pads, he’s got great advice in the corner and he knows his stuff.

Daniel’s a very big puncher but I managed to get his respect with my jab. I managed to land it but he was still coming forward and he hit me with some big shots. I still feel them now. He’ll definitely come again. It was tough in there. I think it was the third round when he unloaded a flurry of shots to try and take me out. But I took a lot of them only glancingly and used my footwork and head movement to get away from them and keep going at him with the jab. That was busting him up. I think his nose was bleeding and he was eye was starting to swell up even then. So I kept on doing what I was doing and the jab was landing.

Say I’d land the jab, thrown the right hand and was about to throw the left hook or any of the other combinations, I felt like something was going to come back at me and that something would be really heavy. So I wanted to just keep it quite basic and outbox him and I thought that was working.

I think I do have the hardest chin in world boxing now. But that’s not what I was relying on. I thought I did enough with my footwork and head movement. But I did get hit with a few shots. One made my ear ring, I’m still aching now. But hopefully he’s doing alright and his eye’s going to be fine for the next fight.

I noticed he was breathing heavily even from the second round. He was breathing through his mouth quite heavily and when I was picking up the pace, he was really feeling it.

After a while, I think it was the ninth round, I knew I had him. It was just a matter of time before I took him out. When he took the knee I was thinking, ‘Great. It’s done. I’ve won.’

That last shot was a heavy jab. I think I slipped his jab and threw my jab with full force, with my body weight. I think he knew that was enough.

He took it on himself to end it right there because he felt it was only going to get worse. There was nothing he could do at that time to win the fight.

I felt good. I felt relieved after he took a knee and got counted out. That was great. I felt really good. I’d accomplished what I came to do and shut up a lot of people. And some people won a lot of money as well.

He was obviously the favourite. [One judge had Dubois five rounds up at the time of the stoppage.] They were going to try and rob me of the fight but I made sure that didn’t happen. I wanted to knock him out because of the magnitude of the fight, the things he’d said. I just wanted to give the fans a spectacular finish.

I think everyone underrated me, underestimated me and even when I do win, then it’s ‘because Daniel didn’t do this…’

I broke his will and his eye socket.

I think Frank Warren did mention something about a rematch but are you joking? What’s the point of a rematch. I’ll only just beat him again. I think he needs to rebuild. I think he’s a confidence fighter and his confidence was dented. There’s no point taking a hard rematch against a hard opponent like myself.

I’d like to fight for the WBO world title. If that gets vacated by Anthony Joshua, there’s that fight with Oleksandr Usyk which would be a great fight and a great rematch. Hopefully I can be a world title holder early next year.

Since I fought Usyk in the World Series of Boxing, I’ve learned a lot. I’ll be a lot better and I’ll have a training camp where I can have southpaw sparring and get totally prepared for what he brings.

It’s not like Usyk knocked out Dereck Chisora spectacularly, so going into a fight with him I’d never be worried about his power. I know he doesn’t hit hard enough. That’s very dangerous with me. Because if I think you can’t hit hard enough I’m going to come forward with more shots. I wouldn’t be worried to throw shots.