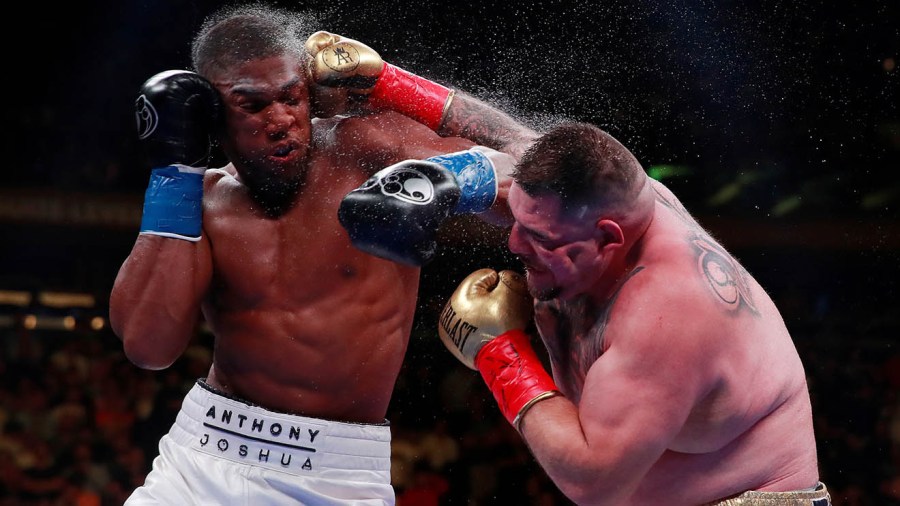 IT’S unheard of that a press conference to announce a fight as big as the Andy Ruiz Jr-Anthony Joshua rematch goes ahead without the fighters in attendance. But this whole rivalry, right from its inception, is no ordinary fare.

Not only did Joshua and Ruiz – a substitute for drug cheat Jarrell Miller – combine to stun an entire planet when the Mexican American dethroned the heavyweight champion inside New York’s Madison Square Garden in June, they have now raised as many eyebrows by agreeing to renew their hostilities in Saudi Arabia. A yet-to-be constructed 12,000-seater stadium in Diriyah, a town on the outskirts of Riyadh, the Saudi capital, will host the WBA, WBO and IBF heavyweight title fight on December 7.

The news was not well-received when it landed last week. Social media was ablaze with criticism and concern. Amnesty International were quick to voice their disgust at the sanctioning of the bout in the country. They cited human rights violations, severe sexual discrimination against women, the murder of the journalist Jamal Khashoggi and the ongoing war in Yemen.

“If Anthony Joshua fights Andy Ruiz Jnr in Saudi Arabia, it’s likely to be yet another opportunity for the Saudi authorities to try to ‘sportswash’ their severely tarnished image,” said Felix Jakens, a spokesperson for Amnesty International after suggesting that Joshua should “inform himself of the human rights situation and be prepared to speak out about Saudi Arabia’s abysmal human rights record.”

With that in mind, it’s little wonder the fighters were not in attendance at Monday’s press conference. This was no time for battle cries, at least not from two boxers. The official purpose of the event was to “formally announce” the sequel but, in truth, it was to sell – see also, justify – the controversial setting. There was also the small matter of Andy Ruiz Jr’s part in all of this to discuss, after reports emerged that he wasn’t particularly happy about going to Saudi Arabia, either.

Joshua’s promoter, Eddie Hearn, sat alongside Omar Khalil, Managing Partner of Skill Challenge (AKA official event partner in The Kingdom of Saudi Arabia), and did their best to put any fears to rest. The good news, at least for those who stay at home and watch the event on Sky Sports Box Office (no US broadcaster has been confirmed), is that the fight will start at 9pm UK time following what we’re told will be a ‘fantastic’ undercard.

For those who make the trip, including women, a 30-day visa was promised upon purchasing of a ticket. The procedure and cost for getting a ticket, alongside the complications involved with having a visa given away with it, were not disclosed. But there will be no loosening on the alcohol laws so anyone hoping to get a pint or two before the fight should rethink their plans. “We see this as a chance people can remember the match next day. We’re looking at the positive side,” Khalil quipped with a smile.

But for many the strict laws and the long history of humanitarian issues in Saudi Arabia is understandably no laughing matter. As recently as 2018, the nation’s discriminatory male guardianship system remained intact despite government attempts to abolish it. There has been some progress in that regard, but the concerns raised are understandable. Khalil attempted to dispel them.

“Change is coming and the pace is rapid,” he promised. “Today women are driving on the streets and competitively on racing tracks. Today a woman doesn’t need a male guardian, a woman is an independent individual in the community. She can open a bank account, she can drive, so change is happening, with us or without us. And the pace is so rapid. We look forward to welcoming the whole world.”

Khalil went on to speak of the demography of 40 million, of which 70 per cent are under the age of 24. The hope, he claims, is that the increasing number of sporting events will encourage locals to embrace sport and, in turn, improve the prospects and reputation of the nation.

Hearn believes that the event, if a success, will lead to a huge change in the sport of boxing. The contest follows last year’s bout between Callum Smith and George Groves, and Amir Khan’s farcical win over Billy Dib in July – both in Saudi Arabian city, Jeddah.

“I follow a trend of a country that is looking to invest in sport,” Hearn explained. “I look at it, almost selfishly, for the sport of boxing. To say that there is a massive opportunity here for the sport of boxing. Not people who just want to bring in a sport and televise it around the world, they want to get that younger demographic of people involved in the sport; in training, in taking part in physical activity. That interests me because the future of boxing in Saudi Arabia is not a government that go, ‘Yeah we’ll do a bit of boxing and put it on TV’, it’s when a population say, ‘We love the sport of boxing’. If they do, Saudi can’t do anything but do boxing. That’s great news for me because they’re going to have me back, and they’re going to do more and more [boxing] events.”

Riyadh, where there have been six intercepted missile attacks since 2017, does not exactly offer fans the hedonism of Las Vegas, the razzmatazz of New York or the comforts of the UK. Hearn, who admitted that money was a driver in the decision to hold the rematch in the ‘neutral’ land of Saudi Arabia, recognises that this is a hard sell but urged fans to put their fears aside.

“When we made the decision, I knew that not every response would be positive, I knew there would be criticism and controversy,” he said. “I’m a boxing promoter. Sometimes the criticism and the curiosity will lead to an event of an extraordinary magnitude.

“In that respect, no one really knows what to expect in Saudi Arabia for this event, other than the people involved in it, who know what’s coming, who know the vision, who know the arena that’s being built and who know the infrastructure.

“You either have to embrace that potential for the sport or turn your back on it. The reason I’m getting the criticism is that no other promoter has been able to deliver it [a superfight in this region]. Because every promoter has tried. They will tell you all the proposals they get for fights. Mayweather-Pacquiao, Wilder-Joshua, Mayweather-Khan. Every promoter has been trying to land a major fight in this region, and we’ve done it. The proof will be in the pudding and that’s the objective now, to provide an event on December 7 where everybody turns round and says ‘Wow’.”

Reports that Ruiz himself had yet to agree to the terms and conditions of the return were also dismissed. Hearn insisted that the 29-year-old had “100 per cent” signed.

“That’s come from a fake website, from Facebook,” the Matchroom promoter said when questioned about reports that Ruiz had thus far refused to commit. “What he [Ruiz] wants to know are the answers to certain questions: How does the commission work? How does security work? How does travel work?

“He said, ‘Will I have a gym?’ I told him they are going to build him a gym and that it would be state of the art. ‘Can my friends come?’ Yes.”

In effect, Ruiz signed for this fight several months ago when he agreed to the rematch clause in the contract for their first bout. Hearn admitted there had been some discussions from Team Ruiz about improving those terms but, ultimately, the new champion is contractually obliged to fulfil the return, wherever it takes place.

“When Andy Ruiz signed the contract for the first and second fights, it was a dream come true for him,” said Hearn.

“He would have taken much less to be honest with you. Once he wins the first fight, every man and his dog from his local gym is telling him he should be getting this and that.

“The deal was very fair, the deal was negotiated and everyone who signed that deal, whether it was Tom Brown, his promoter, whether it’s Ruiz himself, Al Haymon, his management company, they all know their obligations.

“But throughout this whole process what you don’t see is us keeping Tom Brown, Al Haymon informed of our decision-making process and ultimately one of the reasons why we chose Saudi Arabia was because it is a neutral venue.

“They made it clear they didn’t want to come to the UK. We were within our rights to stage it in the UK, but to be honest with you, we didn’t want any excuses.

“There would have been 10 times more problems with Andy Ruiz to come to the UK than a neutral venue.

“That process was discussed with them and they said they would be a lot more comfortable to go to Saudi Arabia and once that decision was made, the contracts were signed last Wednesday or Thursday, myself and Tom Brown emailed the governing [sanctioning] bodies to let them know the date of the fight, the venue for the fight and that process is confirmed with the governing bodies.

“There’s probably a little bit of leverage in terms of fun and games, but contracts have been signed by both sides.”

Acknowledgement of ongoing “fun and games” is a little concerning, particularly in the precarious world of boxing, where fights can fall apart over the tiniest detail. Even so, Hearn is confident that there will be no insurmountable problems ahead of the projected September media tour that will take in New York, London and Saudi Arabia when the fighters will start to play their part in promoting the event.