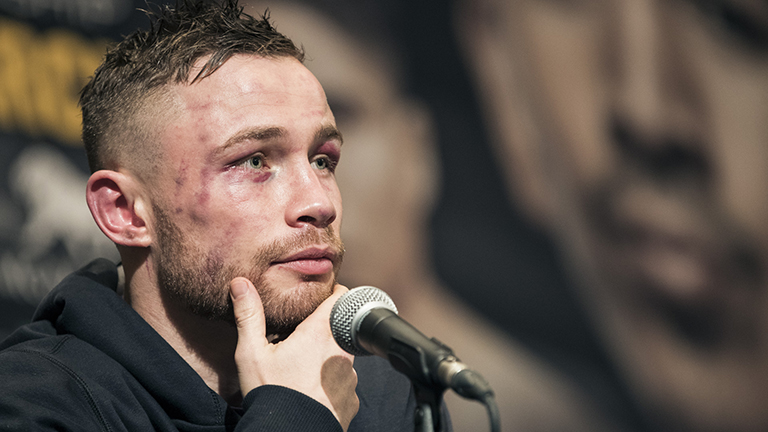 A day after his loss to Santa Cruz, Carl Frampton shows his true colours

HIS eyes are shaded a dark tinge of purple. His features are slightly warped by bumps and bruises and a strange triangular swelling adorns his forehead, as if someone has taken a hot iron to it.

Of course, nobody attacked Carl Frampton with a household appliance – the night before he had shared 12 gruelling and brilliant rounds with Leo Santa Cruz at the MGM Grand Garden Arena in Las Vegas.

Frampton lost his unbeaten record and WBA featherweight title to a disciplined and focused Santa Cruz, who Frampton defeated last year in New York. Just like the first meeting, it was bitterly close and produced some breath-taking action.

However, as he mills around an Irish pub on the Vegas strip the day after the fight, Frampton can’t help but smile every now and then. He is surrounded by hundreds of his loyal fans who made the trip to America, making good on his pre-fight promise of spending some time with them after the fight to show his appreciation for their support.

The inside of the pub is jam-packed, and more fans are spilled out into the front terrace. Tourists wandering past stop to check out the commotion.

“It’s The Jackal!” an Irishman barks in response.

It’s 1pm local time but the vast majority have been drinking for a while – some haven’t stopped since the night before. All of them want a few seconds of Carl’s time, to get a selfie or just to shake his hand. He doesn’t turn a single request down.

In fact, he buys every single fan there a drink. No one would have blamed him for staying behind close doors after the defeat. He had torn himself away from his young family for months during his arduous training camp and would surely have yearned to spend some quality time with them. However, he could not ignore the thousands who had followed him to Vegas.

Inside the pub, he stands on a balcony overlooking the ground floor bar, Guinness in hand, once again blown away as hundreds of men and women – of all ages – chant his name.

“I just want to thank everybody for coming out, I know it cost a lot of dough to get here. Sorry to disappoint. We’ll get him back, I promise,” he tells them.

Judging by the atmosphere, he’s disappointed no one. Carl had a similar celebration in New York when he defeated Santa Cruz last year and while the man himself was understandably more cheery that time around, his fans are still just as boisterous and proud.

“Something like this might never happen again in my lifetime,” one fans says. “How many times do you get to follow one of your own to Las Vegas?”

Much like it did with Ricky Hatton, Las Vegas will certainly welcome Frampton and his legions of followers again. His stock probably rose despite the loss to Santa Cruz – there’s every chance he will be back, and so will his vociferous Irish support.

One fan traded his partner’s car in for a cheaper model to afford tickets. One came from New Zealand, another from Australia. A couple of guys got ‘COTJ’ (Come On The Jackal) tattooed on their buttocks while out in Vegas. It’s not often that a fighter generates such passion, but acts like the one Frampton is undertaking – engaging with his fans while his heart is surely breaking – makes him a rare breed.

However, he plans to do more. While Santa Cruz made the necessary adjustments, Frampton did not adapt for this rematch. He makes no excuses, but admits he made mistakes in the ring. He is desperate for revenge.

A quick sample of those in the pub shows that most saw it as a close fight; some had it level, some felt Frampton had done enough. Unsurprisingly, no one admits that Santa Cruz was a deserved winner. However, not one of them cares. Frampton has gone from a small, shy lad from a council estate in Tiger’s Bay to headlining in the fight capital of the world and, crucially for them, he hasn’t changed on that journey. Despite his face being plastered all over the Vegas strip this past week, he remains grounded and self-deprecating.

Eventually, Frampton makes his way out of the pub as his fans cheer and applaud. He will eventually head home, enjoy his family, let his wounds heal and plot his next move. His supporters have already proven they will follow him absolutely anywhere, but whether it’s a rubber match with Santa Cruz or not, Carl wants to stage his next fight in Belfast. Whoever’s in the opposite corner, they’ll be up against Frampton and the Jackal’s army.