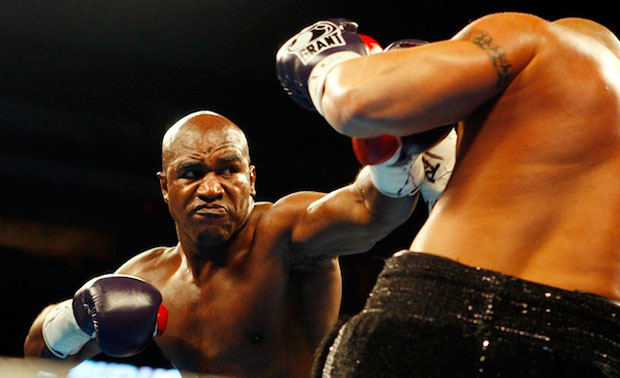 WHEN Mike Tyson bared his teeth, clamped them into Evander Holyfield’s ear and tore away a strip of gristly flesh, he was paying the “Real Deal” a perverse compliment. Tyson knew he couldn’t beat Evander and waved a grotesque flag of surrender. After almost 13 years as a professional boxer, winning numerous titles along the way, Holyfield at last secured the respect he deserved when he bettered Mike Tyson for a second time in 1997. By then, he was used to proving people wrong.

Which is pretty much what Holyfield grew up to do; courageous almost to a fault, Holyfield consistently fought and beat the best of his era.

Despite winning a light-heavyweight bronze medal (he was controversially disqualified in the semi-finals) at the 1984 Olympic Games, his reputation lagged behind the likes of US teammates Meldrick Taylor, Pernell Whitaker and Tyrell Biggs. But he was the first member of that dream team to claim a professional world title when, just two years after fighting in a vest and headguard, he went 15 hellish rounds with Dwight Muhammad Qawi and took the WBA cruiserweight title via a split decision.

He cleaned out and unified the division, beating titlists Rickey Parkey and Carlos DeLeon, along with top contenders Henry Tillman, Ossie Ocasio and Qawi in a rematch. During this time, he always had his eye on the greater prize in a land ruled by a monster called Tyson.

It still looked a stretch that he’d have a chance against Tyson, though. Holyfield, although winning, was making hard work of it in a way that Mike was not. While Tyson was blasting out Carl Williams in a round, Evander was slugging it out with Alex Stewart over eight. And then, the unthinkable happened.

In February 1990, Buster Douglas – a respected but not feared contender – knocked out Mike Tyson. Holyfield then knocked out an ill-prepared Douglas in three rounds and suddenly Evander was champion, almost by default. The world was waiting for Tyson to get his act together and rule again.

Holyfield was eager for the match, too, but after turning back the challenges of George Foreman over 12, and late substitute Bert Cooper in seven, Tyson was imprisoned for rape.
After struggling with wise old Larry Holmes, Evander lost his titles to the up-and-coming Riddick Bowe after a fantastic scrap. Holyfield’s days among the elite, not for the last time, looked numbered.

Incredibly, though, Evander won the rematch. For a while, it looked like that would be his last hurrah as he lost to Michael Moorer, and was then stopped in a rubber match with Bowe. Fans called for him to retire. But Holyfield had some business to attend to.

Tyson had repositioned himself as the baddest man on the planet after his prison sentence, knocking out all five comeback opponents with unerring ease, and agreed to take on Holyfield.

Evander had never been better, standing up to Mike’s power, blasting him back with painful combinations, and stunning the world. He knocked him out in 11 rounds before that infamous rematch scarred both men – for different reasons – forever.

The warrior rode this final wave of gritty brilliance for as long as possible, dispatching former conqueror Moorer in eight rounds, but he couldn’t keep up with Lennox Lewis in their drab 1999 superfight and was lucky to escape with a draw. He lost the more competitive rematch before his form plummeted.

A dire three-fight series with John Ruiz allowed him to masquerade as a four-time heavyweight champion (he picked up the WBA belt in one of their meetings) before losses to Chris Byrd, James Toney and Larry Donald convinced the New York State Athletic Commission to take away his license in 2004.

In 2006 he embarked on a comeback and, to his credit, fought well enough to secure two further title tries; losing a decision to WBO champ Sultan Ibragimov and was unlucky to be pipped by WBA champion, Nikolay Valuev in 2008. He fought on, crippled by debt, until 2011, and officially announced his retirement in 2014.