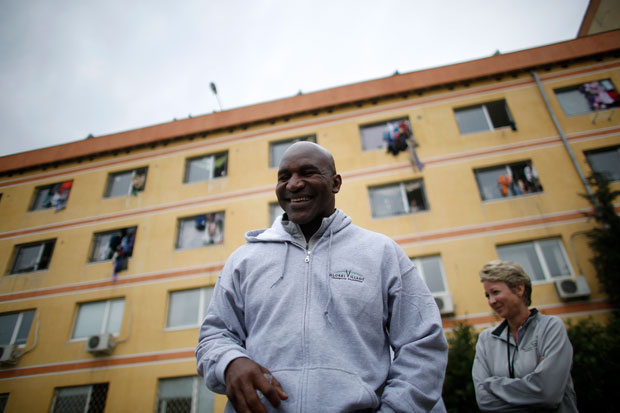 ‘The Real Deal’ talks to Matt Christie about his retirement, his career, and what makes him tick

SEVEN days have passed since 51-year-old Evander Holyfield announced his retirement from boxing after accepting the gloves don’t fit like they used to. “I won’t miss boxing,” he says cheerfully, “because I’m a part of it.”

Every 10 minutes, almost like clockwork, his conversation with Boxing News is interrupted.
“Excuse me, I just wanted to shake your hand,” a passer-by says. Another asks him for an autograph and later on, an old lady plants a kiss on his cheek and takes a photograph of herself alongside the former world heavyweight champion. After each exchange, the response from Holyfield is the same. “You’re welcome,” he says. “No problem.”

Talking to Holyfield is a pleasant experience. This is a fighter who won an Olympic bronze in 1984, cleaned up at cruiserweight, before leading a formidable heavyweight pack through the 90s, trouncing the heavily favoured Mike Tyson along the way. But he remains humble, thankful for the memories, and pleasingly, after squandering the millions of dollars he made, optimistic about what lies ahead.

“I’m happy,” he says. “I learned my lessons. I’m a promoter now and I want to give guys the opportunity. I don’t need enemies anymore. I don’t need people thinking, ‘I need to beat this guy up.’ I’m not a fighter anymore. All I ask is that the guys I promote don’t quit. If they don’t quit, they will get a chance from me.”

Holyfield made a career – one that is certain to land in the Hall of Fame in 2017 – out of showing no quit. Testament to that are the epic wins over Tyson (by far his most satisfying night), Dwight Muhammad Qawi, George Foreman, and Riddick Bowe, but the “Real Deal” is also proud of the character he showed when victory eluded him. He admits he wanted to quit during the third fight with Bowe in 1995, when he was stopped in eight, and four years later, against Lennox Lewis, when he picked up a gift draw.

“If it wasn’t for my son I would have quit,” he reveals. “In those situations you don’t just think about yourself. All things go through your mind. I didn’t want anyone telling my son, ‘You’re going to be like your dad and when the pressure builds up, you’ll just walk out.’ I didn’t want my son to be criticised for something I had done. That is what made me take the beating, because if it wasn’t for my children, I would have walked out of there.”

Undoubtedly, his retirement was overdue. He hasn’t fought since beating Brian Neilson in 2011, but he refused to accept the ride was over. With his glorious peak disappearing behind him, Holyfield defiantly creaked on, hoping the Klitschkos would grant him one last chance.

“They’re good fighters but they don’t fight on the inside,” he observes about the Ukrainian giants. “The people they fight don’t know how to fight on the inside either so they don’t need to worry about it. I felt I would give them trouble, that my chance to beat them was as great as their chance to beat me. But they wanted me to take these other fights. And maybe I’d win those fights and maybe I wouldn’t. I don’t want to fight those young guys who have nothing to lose. They’re bigger, younger and their reflexes are probably faster. I didn’t want to start over. But, you know what? If I wanted it that bad I could have made the decision that that’s what I was going to do. But I didn’t.”

It’s easy to criticise the Atlanta resident, 44-10-2 (29), for fighting too long. But that determination is what made him a hero to millions. He credits his parents for sprinkling the magic dust.

“The only thing I ever knew about my father was that he never let anybody outwork him,” Holyfield explains. “Even as a kid I loved working hard, chasing people down, being dirty, getting ahead. Loved it. Boxing training was one of the things that I loved. I didn’t like the boxing part, but I loved the training. People would always ask, ‘when you gonna stop?’ But I have always liked being able to do what nobody else could do.

“My mom told me to find one thing and be great at it. I found boxing and I thought, ‘I’m going to stick to this. I’m going to hold onto this for a long time.’ As heavyweight champion of the world I have met five or six reigning presidents. I go to England and I meet the Queen, and she knew my name!

After 45 minutes of conversation all that’s left to do is thank Holyfield for his time, and for the memories.