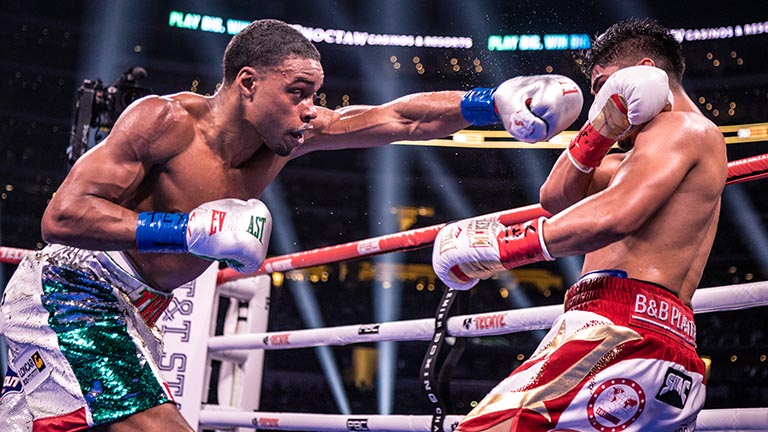 WELTERWEIGHT champions Errol Spence Jnr and Shawn Porter have been conversing in a combative language that harks back to the good old days ahead of their 147lb unification fight this Saturday (September 28) at Staples Center, Los Angeles.

As if shooting respectful nods and winks the way of Messrs Leonard, Hearns and Duran, there has been talk of getting the job done inside the distance, inflicting pain, making dents and statements, and of not being truly content unless their opposite number is not only defeated but devastated. More than simply saying all the right things, they are paying homage to the golden age. They are perhaps setting us up for something special.

Twenty-nine-year-old Spence, the narrow favourite, has set the tone. He was in a merciless, vicious mood the night he ripped his IBF welterweight title from England’s Kell Brook in May 2017 and hasn’t let up since. He took Brook’s belt and cracked his eye socket in Sheffield, before then chopping down Lamont Peterson and Carlos Ocampo in subsequent defences of the title.

Only Mikey Garcia, in fact, has been able to hear the final bell during Spence’s reign. Undersized and overwhelmed, Garcia was a champion at three different and lower weights yet had no answer to Spence’s size, range and spite when the pair met in March at Arlington’s AT&T Stadium. He made it to the end but couldn’t make it much of a fight.

The bigger man prevailed, which tends to happen when little meets large, but that doesn’t mean size alone got the job done for Spence. Far from it. In addition to being big and strong, he was also poised, measured and focused for every one of the 36 minutes he and Garcia stayed in punching range. His victory was, above all else, emblematic of his growth as a champion.

“I already have it in my head that I want to punish Shawn and get an impressive knockout,” Spence, 25-0 (21), said of his next opponent. “Nothing he can say can stop me. That’s my mentality. I have a lot of dog in me. I’m a guy who always comes to fight. I’m going to do what it takes to win.

“I’m going to have him distraught in the ring and then I’m finishing him.

“He doesn’t have the skills to beat me. I’m not worried about Shawn boxing like he did with [Yordenis] Ugas, or what he did with [Danny] Garcia.

“He’s going to have no choice but to come forward.”

For a time, there was nothing Shawn Porter liked more than marauding forward and connecting his head to an opponent’s chest. It was his natural style when turning pro in 2008 and the intensity he showed in adopting this style led to him becoming the IBF welterweight champion in 2013 and then, more recently, the WBC champion.

He won that title a year ago against Danny Garcia, narrowly outpointing him over 12 rounds, before defending it in March against Cuban Yordenis Ugas in an even closer fight. Both times Porter, 30-2-1 (17), elected to show other facets of his game, neglecting the aggressive style of old in favour of operating on the back foot as a counterpuncher. It won the 31-year-old a couple of decisions, but he may have lost some of his audience in the process.

“He [Spence] has said, ‘I’m going to knock you out,’ and I’m not surprised to hear him say that because I know his mentality,” said Porter. “I know who he is as a person. He’s very driven and competitive, and I get that. The part about it for me is he may be trying to psych himself [up] into thinking he can do it.

“I think I have a proven chin. I’ve taken some pretty good shots from some top guys and I’ve managed to handle that and win.

On this list of opponents you will find losses to Keith Thurman and Kell Brook, both of whom successfully neutralised Porter’s bouncy, hyperactive style to win decisions. Thurman did it with power shots, or the ever-present threat of them, while Brook did it with footwork, movement and some well-timed stifling.

Spence, who fell for none of Brook’s tricks two years ago, will have no doubt watched these fights and gained knowledge from them, and he appears good enough and big enough – he enjoys a two and a half-inch height advantage, as well as a three and a half inch edge in reach – to combine the best of both approaches and add a second world title to his collection and a third decision loss to Porter’s otherwise stellar pro record.

In the night’s chief support contest, David Benavidez looks to win back his old WBC super-middleweight crown when he locks horns with new champion Anthony Dirrell.

Benavidez, 21-0 (18), had won the WBC strap with a split-decision victory over Ronald Gavril in 2017 only to then get stripped of the title when he failed a Voluntary Anti-Doping Agency (VADA) drug test (for cocaine) the following year. He lost his belt, served a four-month suspension and returned to the ring in March, stopping J’Leon Love in two rounds.

Dirrell, meanwhile, picked up what Benavidez left behind, taking the vacant WBC title in February with a 10-round technical decision win over Avni Yildirim. That fight was stopped due to the severity of a cut Dirrell, 33-1-1 (24), suffered during a seventh-round accidental head clash. It was Dirrell’s first world title win since beating Sakio Bika five years ago to win the same belt.