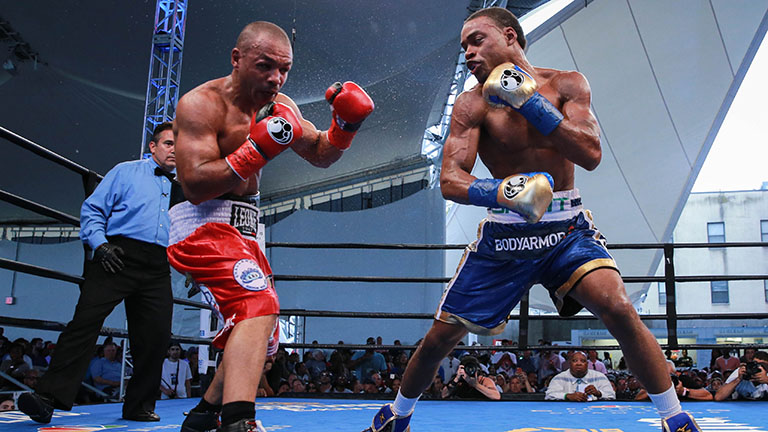 THE Oxford Dictionary of English defines the word “truth” as ‘that which is in accordance with fact or reality.’ And nothing is more real than that which is seen with one’s own eyes.

On Sunday afteroon, in Brooklyn, New York, those in attendance at the Ford Amphitheater witnessed American contender Errol “The Truth” Spence systematically break down and obliterate Leonard Bundu, from Italy, an opponent that had previously never been stopped in his 11 years as a professional.

Spence left a mark on the crowd by methodically tearing through the seasoned veteran and closing the show in impressive fashion. The official result was Spence by knockout at 2:06 of round 6.

“I thought my performance was great,” said Spence after the fight. “I was shaky in the first and second rounds, but was able to get into a rhythm the rest of the fight. Once I was able to catch his rhythm and break him down, I knew I had him.”

Bundu was jumpy out of the gate and his style was as perplexing as ever. Early on, he pressured the 26-year-old Spence with wild right hands over the guard and frequently switched his stance trying to get a different read on his opponent.

Though the 41-year old Bundu arrived in outstanding shape, the size difference in Spence’s favor was immediately apparent, a fact that was exacerbated by Bundu’s awkward head movement and low feints.

Despite Spence’s effective jab work early on, Bundu achieved some moral victories in the first stanza and may have even stolen the round on some of the cards due to his activity.

In the second outing, Bundu’s head movement and flips to orthodox kept Spence cautious, but the American began finding a home for his jab halfway through the round, a fact that helped him control the distance as the fight progressed.

Bundu, perhaps sensing that his plan was being dismantled, attempted to close the distance on Spence through his unconventional footwork and looping hooks but, instead, tangled his opponent up in a quasi-greco-roman maneuver that caused Spence to hit the canvas in a fall that was immediately ruled a slip by the official.

The Italian pounced again, landing a two punch combination on Spence, who countered with stiff jabs. Those popped Bundu’s head back repeatedly and kept him honest. The veteran tried to keep it in the trenches with combination punching on the inside that got the crowd’s attention but didn’t seem to do any damage to Spence.

The third and fourth round showcased Spence’s ability to make adjustments within the fight, as he began to counter, slip and block Bundu’s lefts with his subtle version of the shoulder roll.  As the bell to signal the end of the fourth approached, Spence caught his opponent off balance in an exchange that led to Bundu losing his mouthpiece.

The short break seemed to either rejuvenate the Italian or allow for his corner to deliver some fresh instructions as they were washing out his gear. Bundu lunged immediately back into action at the signal, leading to the best exchange of the fight.

Lasting nearly half a minute in the center of the ring, the short scrap was well-received by the Brooklyn crowd but, when it was all said and done, very little damage was done by either fighter.

By the fifth round, the fight had clearly turned in Spence’s favor. He found success with alternating body jabs and straight lefts that set up his dangerous left hook. He also seemed to find a renewed sense of confidence, strutting across the ring while Bundu chased him and threw clumsy combinations that were mostly off target.

Finally, as Bundu clearly began slowing in the sixth, Spence began to systematically close the distance, landing powerful hooks that hurt his opponent. The fatigued Bundu was then caught against the ropes and ducked into a thudding left uppercut from Spence that sent him on a trip to the canvas, a rare sight in his career.

As the official signaled for the pair to resume action, Spence, tasting blood, went in for the kill, alternating body shots and combinations up top to set up an extraordinary left uppercut-right hook combo that seemed to amputate Bundu’s legs from beneath him.

“I seen he was hurt. I seen he was hurt the first time when he dropped his mouthpiece,” said Spence. “And then when I hit him again, I seen he was wobbling and his eyes kind of rolled to the back of his head. That’s when I jumped on him and went for the kill.”

Confident that the deed was done, Spence walked away from his opponent, turned toward Sheffield and shouted, “I want that strap!”

Kell Brook, the owner of IBF belt at welterweight, is hardly on holiday as he prepares for his middleweight debut against one of the most feared boxers in a generation, Gennady Golovkin.

Little is known about whether or not Brook will ever go back down to 147 pounds after campaigning at 160 but that is of no consequence to the new number one contender, Errol Spence Jnr.

“I want a shot at Kell Brook as soon as he’s done with ‘Triple-G,’ said Spence in the post-fight interview. “If he’s not going to fight me then he needs to vacate and I’ll fight somebody else. But I definitely want that IBF title shot this year.”

Today in Brooklyn, New York, Errol Spence Jnr. sent a message to the top tier boxers in the welterweight division, cautioning them that the demolition they had just witnessed was not a fluke but, actually, “in accordance with fact and reality.”

Behind his humble smile you can almost hear him asking: ‘You see what I did, when Pacquiao and Thurman couldn’t? That right there was real. And this right here is “The Truth.’’