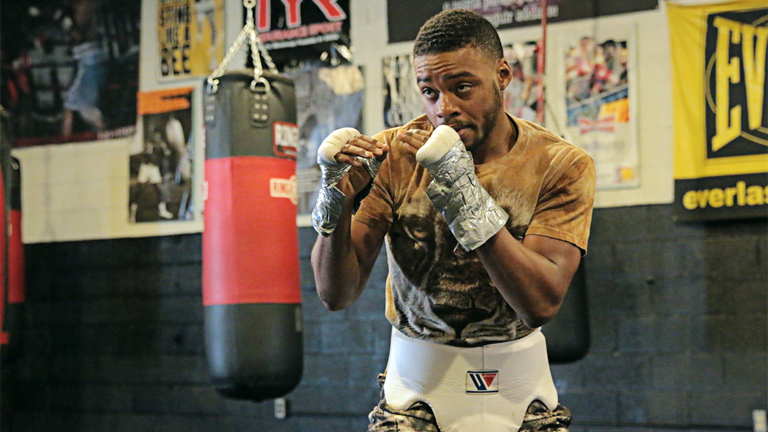 Both Errol Spence Jnr. and Leonard Bundu weigh in at 146.2 pounds ahead of their Brooklyn brawl

Both fighters looked lean and ready on the scales at 146.2 pounds, easily landing under the welterweight limit. They clash tomorrow in New York City in an IBF eliminator that guarantees the winner a title shot the next time they step into the ring.

For the 26-year-old Spence, tomorrow isn’t simply about winning or even getting the opportunity to fight for the championship belt currently held by Kell Brook. He wants to make a statement that he belongs in the upper echelon of the division, alongside his Premier Boxing Champion stablemates Danny Garcia, Shawn Porter, Amir Khan, and Keith Thurman.

After Sunday’s match, he will have shared an opponent with Thurman, which surely adds to his desire to shine against Bundu and outperform his contemporary.

“A win is always great, but I want to look impressive,” said Spence to Premier Boxing Champions. “If I look impressive against Bundu or even stop Bundu, it would be a huge statement at the 147-pound division, doing something that Keith Thurman couldn’t do.”

In a career spanning eleven years, the sturdy Bundu has never been knocked out as a professional. Though he was no match for the undefeated 27-year-old Thurman, losing every round on all three scorecards, Bundu proved his mettle by going distance against an opponent with an 80% knockout rate who is more than well-known for closing the deal.

Spence annihilated Chris Algieri in his last outing, knocking him down three times en route to a 5th round TKO victory. This is the same Algieri that finished on his feet against Russian slugger Ruslan Provodnikov, and hard-hitting Amir Khan and Manny Pacquiao.

While styles make fights, if Spence can once again do what other elite fighters in his division have been unable to do, it will further increase his stock value as a top-tier welterweight. No easy task in a division in which it’s incredibly tough to stand out from the crowd.

“Chris Algieri’s more of a pure boxer who tried to plant his feet and fight a little bit,” Spence continued to PBC. “Bundu has more to his arsenal than Chris Algieri. He can move, box and come forward. But this is my time. This is the most important fight of my career.”

Also featured on the card will be the return of women’s boxing to American network television with undefeated Brooklynite Heather “The Heat” Hardy (17-0, 4 KOs), in her home turf, facing the tough Shelly Vincent (18-0, 1 KO). The unbeaten New England Native is taking a major step up in competition against the hard-hitting Hardy. They enter the ring tomorrow with high hopes of winning the bout, which is being contested for the vacant WBC International featherweight title.