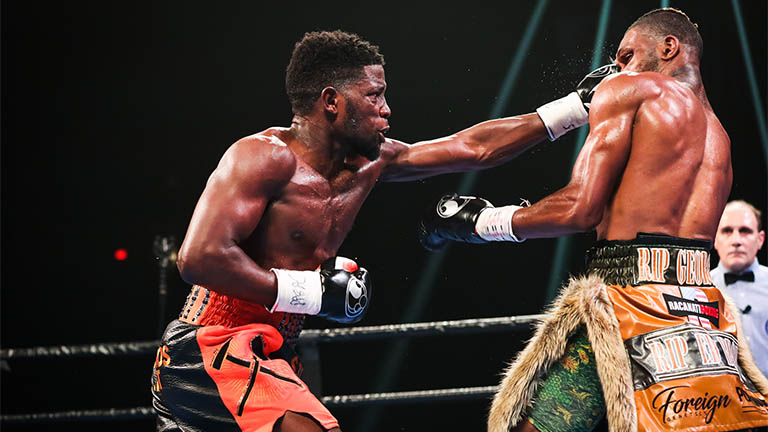 SUPER-WELTERWEIGHT contender Erickson Lubin is trying to prove that one loss doesn’t define a career. He took another step in dispelling that belief at the Santander Arena, cruising to a 10-round unanimous decision over Chicago-based Jamaican Nathaniel Gallimore. All three judges (Lynne Carter, Adam Friscia, and Kevin Morgan) scored it 99-91 for the Florida-based Lubin.

Originally, Lubin was slated to face Terrell Gausha but Gausha pulled out because of an injury he incurred during training camp. Rushing in as a replacement was Gallimore, who had a reputation for hitting hard and for whom many observers felt would offer a far sterner test than the cagey Gausha. Lubin, however, was never once threatened.

Recall that the hard-hitting Lubin was fast-tracked to a title shot against Jermell Charlo in 2017, losing by devastating knockout in the first round. Perhaps the memory of that loss has become permanently lodged in Lubin’s head, because against the limited Gausha, Lubin seemed far too cautious and placid in his approach, especially for somebody who can truly crack.

The southpaw Lubin worked behind his jab and landed the straight left to the body consistently all night, keeping Gallimore at his preferred distance. In the fourth round, he stunned his foe with a right hook and followed it up with a series of hard punches, including two straight lefts that knocked Gallimore’s head back.

When the round ended, Gallimore began jawing at Lubin, before referee Gary Rosato intervened. It would become a growing pattern, and a sign of Gallimore’s shortcomings as a fighter.

Indeed, Gallimore simply had no answer for Lubin, whose power and precision dictated the fight at all times, which, in its own way, made his even-tempered fight all the more maddening: should he have pressed the action, Lubin could have made it an early night for everyone involved.

Afterward, Lubin, who is now riding a four-fight win streak, said he would welcome a rematch with Charlo.

On the undercard (TGB Promotions), former lightweight titleholder Robert Easter Jr. routed perennial B-side Adrian Granados over 10 scrappy rounds in what was Easter’s debut at super-lightweight. For the Chicago-based Granados, who was last seen in the ring getting knocked out by Danny Garcia, it was a return to his natural weight class since contending at welterweight for the past few years.

Early on it was Easter who controlled the fight, tagging Granados coming in with straight rights and uppercuts. Granados, as is his wont, absorbed the punches like a sponge, looking to close the gap and make it a phone booth fight.

Eventually, midway through the fight Easter would oblige, partially because it is in his nature to bang away on the inside as well. At the conclusion of the seventh round, Easter would return to his stool with a bloody mouth after a furious exchange that, on the surface, favoured Granados. But there would be no tide-turning moment for the Mexican-American.

Indeed, even though the pace seemingly shifted to Granados’ advantage, it was Easter who was able to land the harder shots on the inside, as opposed to Granados, whose free-wheeling, high-output offence was negated by his lack of power. Too many times it appeared Granados was slapping with his punches, while Easter delivered crisp shots to the body. Eric Dali refereed.

Undefeated Cuban heavyweight Frank Sanchez pitched a 10-round shutout over Belgium-based Congolese Jack Mulowayi for a unanimous points victory. All three judges (Lederman, James Kinney, Morgan) scored it the same, 100-90, in favour of Sanchez, who was brought on after Nigerian heavyweight Efe Ajagba had to pull out because of a back injury sustained in training.

Sanchez drubbed Mulowayi’s midsection all night with hard lead rights and popped a stiff jab that kept his opponent at bay. Sanchez rocked Mulowayi at multiple points during the fight, but appeared uninterested in pursuing an early conclusion. Shawn Clark refereed.

The Verdict Lubin continues his recovery from that devastating Charlo setback.