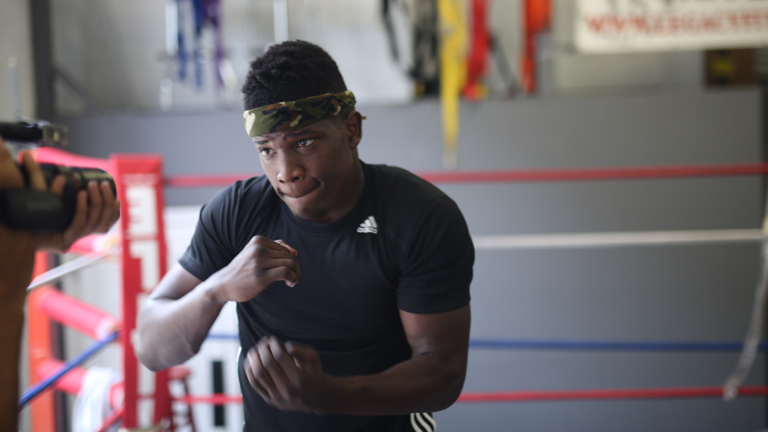 On his family’s involvement in his career:

“My family didn’t really want me boxing at a young age. They wanted me to be into other sports. But I loved it so eventually they had no choice. They’re very supportive now and my dad tries to make it to every fight.

“My family is filled with athletes. I have four sisters and two brothers. One of my sisters is a professional dancer and my older brother played football at a high level. Another older brother boxed and got me into the sport when I was about six.”

On his interests outside of the ring:

“I think I would have kept pursuing my basketball career if I hadn’t gotten into boxing. I played small forward in high school. My game was kind of like James Harden. I liked to score and I was tough to stop.

“I’ve always been really into music. My brother is a music producer so sometimes I’ll get on the mic and spit something. It’s just for fun but I like doing it.”

What motivates you and what kind of mentality do you have in the ring?

“I usually don’t get too motivated by specific opponents. I just want to take them out. On fight night, I’m going to be there ready to go.

“I try to emulate the mentality of Kobe Bryant. He’s a killer. He has the strongest mentality in sports. I just want to take my opponent out.

“Other fighters definitely motivate me. I idolized Muhammad Ali and he’s always meant a lot to me. I looked up to fighters like Floyd Mayweather, Mike Tyson and Meldrick Taylor. There are a lot of guys out there now motivating me. Daniel Jacobs is a fighter that I look up to and Errol Spence is a guy that can really fight. Seeing guys perform on a high level makes me want to get to that level as well.”