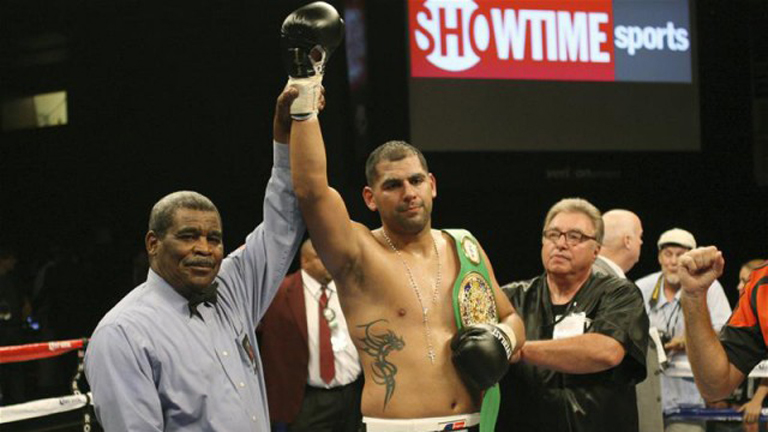 ERIC MOLINA has often mentioned his setbacks. That he began his career with a loss, that he’s endured away trips to take on champions on their hometurf. In England now he is a hefty underdog once again ahead of challenging popular IBF heavyweight champion Anthony Joshua in front of 20,000 raucous Britons on Saturday at the Manchester Arena.

“I used to s*** my pants in fights like this. I’m sitting here, I’m ready to go,” Molina said, insisting that hard experience has improved him. “I’m calm and I’ve been able to mature into the sport and just take it as they come. If you sit here and you weigh down on how big these fights are, you get out of your element and you lose your mind. You lose the fight before it even starts. I don’t play these fights out in my mind to be any bigger than what they are. It’s just a fight. He’s a human being. He bleeds red, I bleed red. We put gloves on and we go fight. That’s it. That’s all it is to me. It’s a sport. It’s what we love. He loves it. I love it. You guys love it obviously,” he continued.

He has been mentored by none other than Oliver McCall and wants to channel the same spirit that McCall used to overthrow Lennox Lewis in 1994. “He guided me through some of his mind frame coming into the fight when he fought Lewis the first time and some of the advice that he has for me,” Eric said. “He’s a good mentor of mine.

“He’s helped me out a lot through my career. What a moment for heavyweight boxing. Why not? History has shown to repeat itself.”

Yet, even though he speaks of making history, he doesn’t expect to change. Molina was a teacher for children with disabilities and expects, at some point, to resume that role once again. “I’ll never look at a boxing fight that can change my life. The sun will rise and set the next day. I’ll never change the person that I am. I’m a schoolteacher. If I win or lose this fight, one day I will be back in the classroom,” he said.

“I’ve knocked out a lot of opponents, I’ve hurt most of the ones that I’ve lost to. I’ve been sparring against some of the top contenders in the world and I’ve hurt most of them. If I was coming over without all that in my bank I’d be in trouble. That’s why you see a calm Molina… Trust me I can hurt him.”