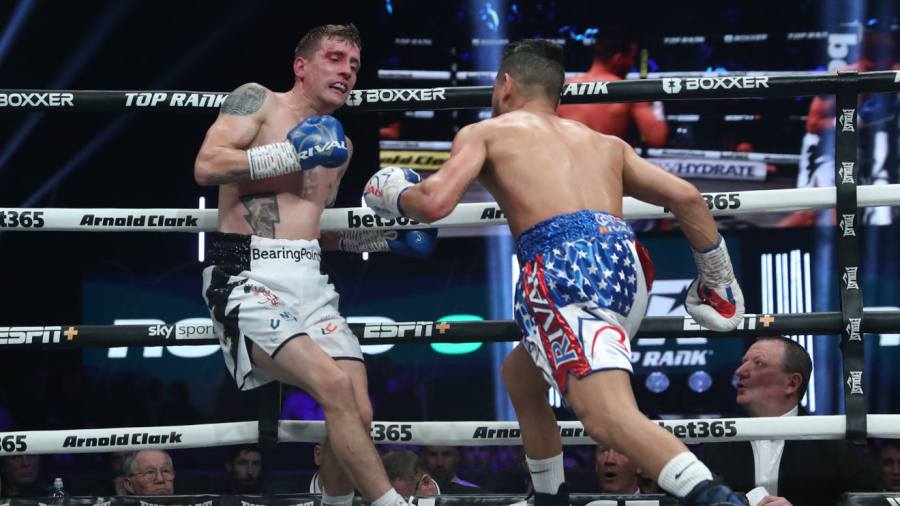 Putting his knockout loss to Robeisy Ramirez behind him, Eric Donovan returns to action. He speaks to Elliot Worsell

HAVING turned professional just weeks before turning 31, Ireland’s Eric Donovan does not need to be lectured about the importance of time. He has at various points taken it, battled it, run out of it, and now, as he approaches the age of 37, feels it.

It is still not enough for him to call time on his pro career, but Donovan, 14-2 (8), knows he doesn’t have a lot of time left to fulfil whatever goals he has left to achieve in the sport. This becomes more apparent with each training camp, which, he says, never get any easier, as well as in fights like his last against Robeisy Ramírez, a Cuban eight years his junior most expect to one day become a world champion.

“I’m bitterly disappointed about the way that fight went,” Donovan told Boxing News. “It never crossed my mind that that’s how it would finish.”

The way it finished was with Donovan, mostly outclassed, stopped in the third round. If that – the result – came as no surprise to most, the performance itself was not one Donovan expected, nor planned.

“The lowest expectation I had – the absolute lowest – was to give him a good run for his money and go the distance,” Eric said. “Unfortunately, it didn’t work out that way for me.

“He was very, very good. But, to be fair, not a lot happened. The first round there was a knockdown that was more of a balance thing. I got a count and that kind of unsettled me. It was a bit embarrassing. In the second round I warmed into the fight more but he opened up an old cut over my eye and that made things difficult because blood was trickling into my eye. Then in the third round he landed the punch that finished it, which was a good shot, though what didn’t help was that I made an error by turning away from it – almost bracing myself for it. You shouldn’t do that. I exposed the back of my head to his punch and it scrambled my senses. It was over before I knew it.

“I never really got the chance to show what I could do in that fight, but that was because Robeisy Ramírez didn’t allow me. His balance was good, his distance was good. I trained to move to my left, because we were two southpaws, and my mission was to never move to my right, because that’s when he sets that trap and moves you on to his left hand. But, to be honest, that’s exactly what he did at the end. He moved me to my right and set me up for it. It was like a person orchestrating a band. He walked me onto it. And that was that.”

Since that loss to Ramírez in February, Donovan has regrouped and is now set to box again on May 14 at the Europa Hotel in Belfast. The turnaround has been quick, giving him a chance to erase memories of Ramírez and get back in the win column, but the overall process – that is, getting back on the saddle – has been no less demanding.

“It’s hard going back to the well when you’re almost 37, but it has to be done,” he said. “I want to do it and I still have a couple of goals I want to make a reality. There’s no other way of doing it than just getting up and doing it. But it’s challenging nonetheless.

“I’ve retired, unofficially, before. At 28, I walked away from boxing and went back into education to try to do something that would bring a bit more security to my life. It wasn’t until I got to 31 that I felt like I had unfinished business and turned professional.

“The first goal was to just have a few fights and if we won an Irish title, wouldn’t that be great? But as I started training and fighting, and won the Irish title, I was mixing it with the likes of Ryan Burnett and James Tennyson (in sparring) and doing well. I thought then that maybe the Irish title was a low bar and that I could instead push towards a European.

“I kept working away and got two brilliant breaks, one against Zelfa Barrett (in 2020) and one against Ramirez. I got close against Barrett, didn’t get close at all against Ramirez, but ultimately came up short on both occasions. That was perhaps the way it was meant to be. They were younger than me and in their prime. I was 35 and 36 taking those fights.

“So now, in my final year, I’m switching my sights to EU (European Union) or full European. If I can get a shot at one of those titles this year, it will be a lovely way to bow out.”

Whether that opportunity arrives at featherweight or super-featherweight won’t matter to Donovan. He can do both. All he hopes for, when Father Time eventually knocks, is that he has achieved that most precious and rarest of commodities: contentment.

“I know more often than not a professional boxing career ends not the way you hoped,” he said. “I don’t want to find myself in that position.

“Going back into training so quickly and picking up the pace has been tough, especially after being involved in such a big event [against Ramírez]. Now I’m also back to shifting tickets and boxing on a small hall show. But that’s par for the course. It has to be done. If I didn’t take this fight – I know the summer is quiet – I might have been having to wait a bit longer. The longer I’m out, you wonder whether you will come back.

“Because it is my final year, I probably have three fights, and that’s it. I’m just taking it fight by fight and hoping I can get that cherry on top at the end.”