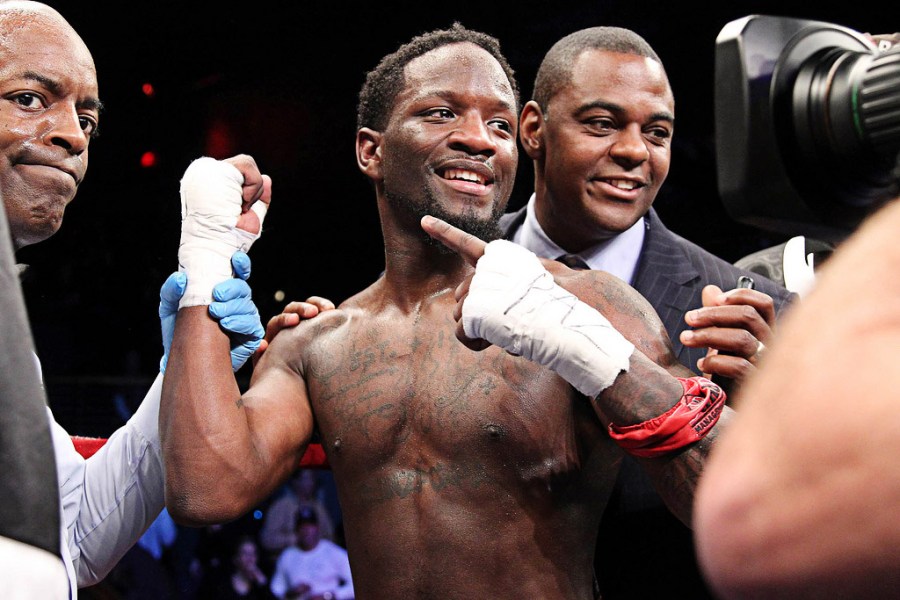 Softly spoken 23-year-old Emanuel Taylor, 18-2 (12) says he will defeat Adrien Broner next month and then achieve his goal of winning a world title at light-welterweight. Coming off a good July points win over Karim Mayfield, “Tranzformer,” as Taylor is known, feels the controversial and outspoken Broner has made a big mistake in agreeing to fight him.

Q: First of all, which of Adrien Broner’s fights have you seen and what do you think of him in general?

You don’t think Broner is more of a hype job?

“I wouldn’t say that. He’s probably the biggest name I’ll have fought so far. But he’s used to fighting smaller guys; who he could push around and back up. He won’t be able to do that with me. I expect a lot of movement, lateral movement, from Broner. I’m training too hard for this fight, man! A win over Broner would be amazing. I’m right on schedule with my training. Camp has been a whole lot of hard work.”

For those that have yet to see you box, how would you describe your style?

“I’m a boxer-puncher. I can box when I have to, I can fight when I have to. It depends on the particular fight [which tactics I use]. I bring a lot to the table.”

And what was your amateur record and how did you first get into boxing?

“My amateur record, I had 186 fights with 20 losses. Most of my losses came at the start of my career when I was young. I won the national Golden Gloves five times in a row and I won the national PAL title three times in a row. I was too young to go to the Olympics so I turned pro (in March of 2009, aged 18). My dad got me into boxing, to keep me out of trouble; me and my brother. I went to the gym to watch my brother train and my dad pretty much forced me into it, to keep me out of trouble.”

As a pro you have two close decision losses, to Prenice Brewer in 2011 and to Chris Algieri in February of this year. Do you consider both defeats as fair verdicts?

“The loss to Brewer was a robbery. I won at least five-rounds (of an eight-rounder). Everyone said to me that I’d won the fight. The loss to Algieri, yeah, I lost that fight. I was rusty, I had been off for ten months. Not making any excuses, but my timing was off and not on point.”

And what would you say was your best win thus far?

“Last time out, I beat Karim Mayfield, I’d say that was my best win as far as when I’ve had to go the distance with someone. But my (eighth-round) TKO over [Victor Manuel] Cayo is probably my best win. That was a good win for me.”

And what would a win over Broner mean for you?

“It would be amazing. I plan on staying at 140 for a couple more years, until I win a title there. Then I’ll look at maybe moving up to welterweight. But first things first and I’m focusing on Broner.  I will beat Broner; he has made a major mistake in taking this fight!”

Who is the best fighter in the world at light-welterweight right now in your opinion?

“I’d say Danny Garcia is the best right now. He’s the man right now. But I sparred Danny, back when he was getting ready for the [Lucas] Matthysse fight (Sept. 2013). They kicked me out of camp, because I was giving him too much work. We did four rounds [of sparring] every other day until they kicked me out. I also like Mauricio Herrera and Lamont Peterson. I guess Herrera really won the fight with Garcia. My goal is to win a world title at light-welterweight. First I’ve gotta beat Broner. He talks a lot but at the end of the day, no matter what he does or says, we’ve still got to throw hands; we’ve still got to fight. His talking won’t win him the fight.”

You plan on putting a lot of pressure on him, bullying him?

“Well, I ain’t gonna give up my game plan (Emanuel also preferred not to say who he has been sparring with for the Broner fight), but I do expect a lot of lateral movement from him. I’m just gonna do my job, whatever it takes to get that W.”