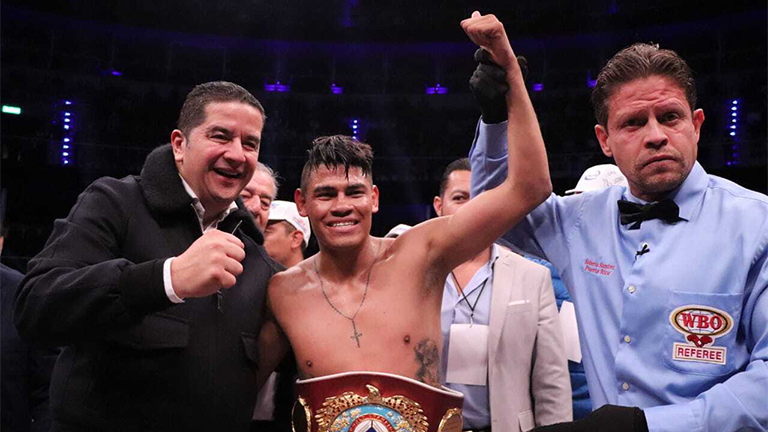 Easy win is just another day at the office for Emanuel Navarrete, writes Jack Hirsch

WBO super-bantamweight champion Emanuel Navarrete was the picture of relaxation as he sat in his dressing room at Auditorio GNP Seguros, awaiting the call to enter the ring against challenger Francisco Horta.

Navarrete was laughing and joking with those around him, oblivious to the high stakes the evening held. To him it was just another day at the office, which is quite understandable considering he can now be called the most active champion in his sport.

Simply put, Navarrete loves to fight, this being his fourth defence in the last seven months. And fighting is something he does quite well as evidenced by his fourth-round stoppage of Horta.

Navarrete is arguably the most unorthodox champion of them all, looking amateurish one moment and sensational the next. He’s a volume puncher who sometimes gives the appearance of slapping rather than punching, but there arrives a point in his fights when it’s like a switch is turned on – and from that point forward it is full throttle until his opponent is rendered defenceless.

Horta, who had never been stopped, is to be commended for never giving up, but his best efforts were offset by a lack of power. The challenger rushed the champion to the ropes now and then, but was largely ineffective. Navarrete took the first three rounds before erupting in the fourth.

It should be noted that a butt might have been the start of Horta’s downfall. After clashing heads he turned away from Navarrete, but the men were quickly waved back into action by referee Roberto Ramirez Jr when a slight reprieve to gather themselves may have been more prudent.

In any event, Navarrete sensed it was time to close the show and punched away furiously for the next minute or so. Horta was trapped in a corner, fought back and tagged Navarrete occasionally, but the champion was intent on not letting his fellow Mexican make it out of the round.

Horta ultimately slumped onto the ropes from the barrage of blows with a final right landing before it was stopped at 2-09 of the round.

In and around Navarrete’s weight class are the likes of fellow belt-holders Daniel Roman, Rey Vargas, Luis Nery and Naoya Inoue. The big fights will eventually come, but for now Navarrete is content to roll up the victories against whoever is placed in front of him.

Boxing’s third longest-reigning world champion, Jerwin Ancajas, made the eighth defence of his IBF super-flyweight title a relatively one-sided affair as he stopped Chile’s Miguel Gonzalez at 1-53 of the sixth round.

Ancajas is not your traditional champion. Promoted by Manny Pacquiao, the Filipino southpaw serves in his country’s military. And when he boxes he is an extraordinary globetrotter, defending his crown all over the world.

Ancajas was never threatened in a dominant performance. He landed well to the body and his punches were tight while picking Gonzalez apart. Ancajas showed outstanding footwork in dictating the pace.

Gonzalez was hurt in the third but fought his way out of trouble. However, he could not survive Ancajas’ sixth-round attack, which started with a hard uppercut. From there the champion poured it on. Gonzalez went down, but referee Wayne Hedgepeth ruled it a slip. No matter, Ancajas kept punching when the action resumed.

Gonzalez frantically bobbed and weaved trying to avoid the onslaught, but was caught with several clean blows, necessitating the stoppage.

After getting hit with a left hook to the liver from Miguel Marriaga, California’s Alfredo Mejia went down and rolled around the canvas in agony to be counted out by referee Rafael Herrera at 1-01 of the sixth round in a scheduled eight.

Mejia had started well, but by the third round the Colombian’s body attack started to have an affect.

All three losses in Marriaga’s career have been in world championship contests, but afterward he called for yet another against WBO featherweight boss Shakur Stevenson. Rated sixth by the WBO, Marriaga could conceivably get the chance, but he would be in over his head against the multi-talented boxer from Newark.

The Verdict Navarrete against any other 122lb champion is an exciting prospect.