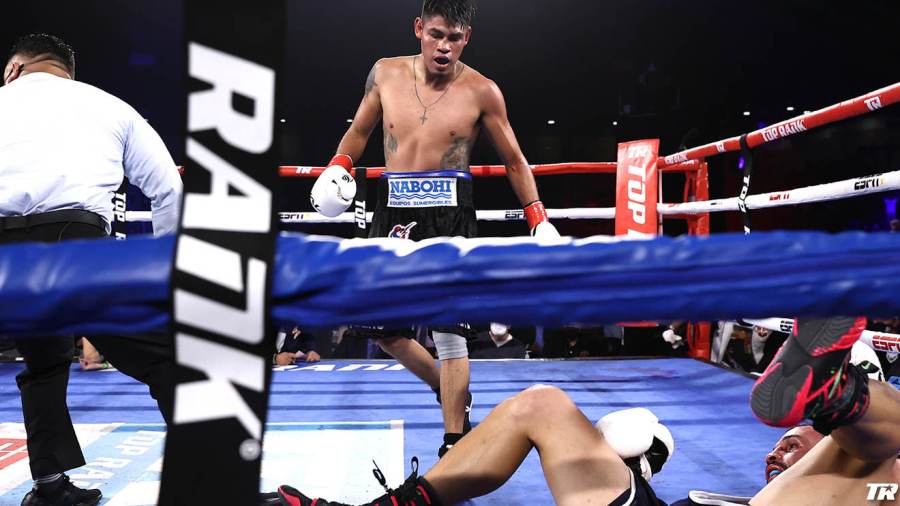 EMANUEL NAVARRETE had his first bout of 2021, successfully defending his WBO featherweight title at the Silver Spurs Arena in Kissimmee on Saturday (April 24). Challenger Christopher Diaz took him to the 12th and final round but the Mexican champion found a brutal finish in their final stanza. He dropped Diaz four times overall, knocking the challenger down in the last round prompted Christopher’s trainer to throw in the towel.

“I knew he was tough, I knew he was strong. And I knew he could hit hard, but he surpassed all my expectations. He brought out all the best in me and so I’ve got a lot of respect for Christopher ‘Pitufo’ Diaz,” Navarrete said. “I was really impressed by ‘Pitufo’ because every time I hurt him, every time I dropped him, he came back stronger. He was a beast in there because he kept coming at me. He kept getting better even though I kept hurting him, and as the fight progressed, you’d expect him to get weaker but he kept getting stronger. I just couldn’t understand it. So I have the utmost respect for Christopher ‘Pitufo’ Diaz and what he did tonight.”

Diaz said, “I’m very disappointed. I wanted to win. It’s a title shot. But next time. He’s a great fighter. He hit hard. We went to war. I made my best fight. I was in shape. Everything was good.

“I’m not a weak fighter. I always bring my heart with me. I came here to fight. I said I want to box but that guy, he’s a problem. We come here to fight, too. He caught me. My coach loves me like a son, and he stopped the fight.”

After a streak of 16 consecutive first-round knockouts, super-middleweight Edgar Berlanga was taken the distance for the first time. Demond Nicholson visited the canvas a few times but lasted the full eight rounds, losing a unanimous decision.

“I know they wanted a first-round knockout, but I enjoyed getting the experience,” Berlanga said. “It was an awesome experience for me. I caught him with an amazing shot at 10 seconds of the last round. I wanted to get him out! But I didn’t, but I got the experience, especially in front of my Puerto Rican people. It was good.”

Welterweight prospect Xander Zayas knocked out Demarcus Layton in 56 seconds. “This was amazing, something I was looking forward to for a long time. The last time I fought in front of a crowd, it was in Puerto Rico,” he said. “Doing it here in Kissimmee, in front of my Puerto Rican fans, was memorable. First-round knockout, what else can I ask for?”