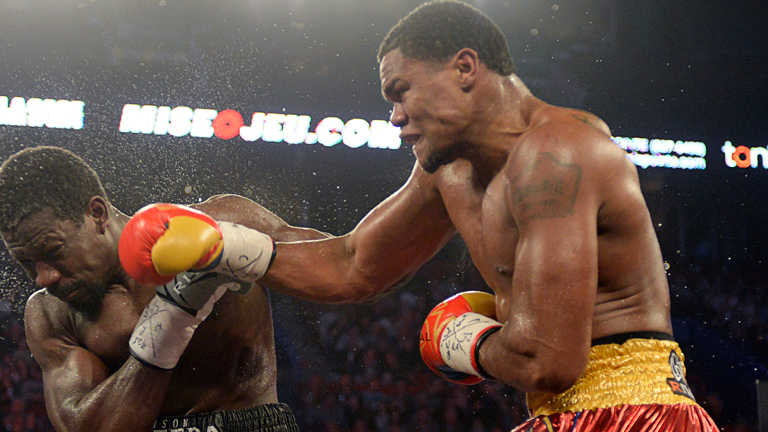 Eleider Alvarez will not fight Adonis Stevenson next

ELEIDER ALVAREZ has agreed to step aside and allow WBC light-heavyweight champion Adonis Stevenson a voluntary defence in his next fight.

Alvarez became Stevenson’s mandatory in 2015 and in his last outing pulverised Lucian Bute, but his promoter, Yvon Michel (who also handles Stevenson) notified the WBC yesterday that Alvarez has stepped aside for now.

“I wish to confirm that the WBC Silver Light heavyweight champion, #1 and mandatory contender to WBC champion Adonis Stevenson, has voluntarily agreed to step aside from his privilege, to give the opportunity to Adonis Stevenson of making a voluntary title defence in his up and coming fight,” his letter read.

“It is understood both fighters, Stevenson and his opponent, are going to confirm, in writing, their commitment to defend the WBC light heavyweight title against Alvarez, in the very next fight, if they are the winner of this voluntarily title defence.”

Reports claim that Stevenson will face Seanie Monaghan in April after talks for a clash with Bernard Hopkins conqueror Joe Smith Jnr fell through.

Stevenson last made a mandatory defence of his title in November 2013 wen he stopped Tony Bellew in six rounds. Since then he has defended his title five times, the most accomplished challenger coming in the form of Andrzej Fonfara, who recently suffered a loss to Smith Jnr.

The WBC also confirmed that it has ordered a final eliminator between Smith Jnr and Oleksandr Gvozdyk, with the winner becoming the second mandatory challenger in the division behind Alvarez.

Smith Jnr and Gvozdyk are ranked third and fourth respectively with the WBC, behind former division ruler Sergey Kovalev, who is ranked second. It is interesting that he has not been included in these recent mandatory plans as talks for a rematch with Andre Ward continue.