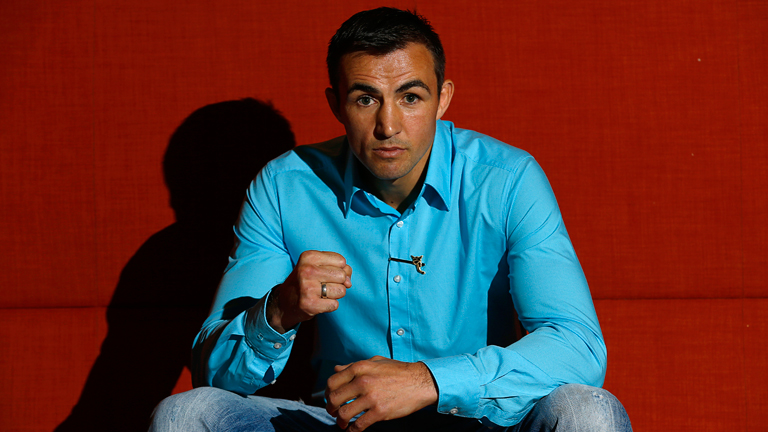 EDUARD GUTKNECHT belongs to a rather exclusive club of fighters who can claim to have beaten Kazakh wrecking ball and unified middleweight champion Gennady Golovkin.

Golovkin is unbeaten as a professional, but is reported to have lost just five times in a 350 fight amateur career which saw him win an Olympic silver medal.

One of those losses came at the hands of Gutknecht, who was born in Kazakhstan like Golovkin, but resides in Germany.

“It was in the biggest tournament in Germany, the Chemie Pokal [in 2005],” Gutknecht told Boxing News.

“I came in as an outsider but I beat Golovkin on points in the first fight and then went on to win the tournament. It was a big deal. It was a really difficult fight, I had to really be careful and work hard. He hit very hard. I had to move a lot, cover myself a lot but obviously hit twice as hard to keep Golovkin off.

The 34-year-old was a top class amateur though has not quite brought that form into the professional ranks. Having operated at a decent level at both super-middleweight and light-heavyweight, Eduard has lost to Robert Stieglitz, Dmitry Sukhotsky and Juergen Braehmer twice.

On November 18 he will box George Groves at the SSE Arena in Wembley in what should be the highest profile fight of his career.

“It’s a big fight, it’s the type of fight I’m pleased to be in. The Wembley Arena is a great arena and I’m really excited to be in front of real boxing fans, UK boxing fans,” he continued.

“I’ve not studied Groves but I’ve watched him a lot, there’s obviously the Sauerland connection there as well so I’m obviously aware of him.”

Having boxed his last two fights at 175lbs, Gutknecht will return to super-middleweight – where he once fought for the WBO world title. With Felix Sturm having recently vacated his WBA belt, Eduard hopes to manoeuvre himself into another title shot.

“I feel really good [at super-middleweight]. I had fights at the weight but now I’m in a big fight and that’s very exciting. I’m really interested in the WBA title, this fight is a great opportunity for that,” he said.

“In every case the plan is to get a world title shot. Especially because it’s in London, it’s such a big fight and it’ll really give me the opportunity to get a shot at the title.”