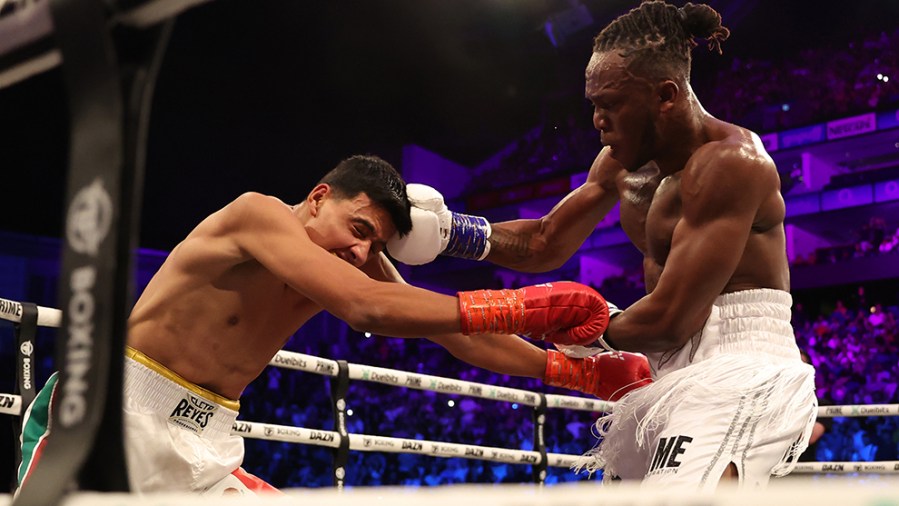 In the business of selling tickets and pay-per-views, is there much difference between a YouTuber dominating a "no-hoper" and a prospect doing the same thing? asks Matt Christie

THERE was a lot of interest (see also: fury) surrounding the exploits of YouTuber-cum-pantomime boxer KSI last weekend. More accusations that YouTubers are making a mockery of boxing. However, judging by the investigation in this week’s issue, the likes of KSI hammering no-hopers is not wildly different to the majority of contests that take place in this country several times a week.

In the home corner, you have the ticket-seller, the point of interest, the all but pre-ordained winner, versus the away fighter, who is not supposed to have his or her arm raised. The script is written long before the opening bell and, consequently, it’s very rare that the away corner gets a single victory on the numerous fight cards that take place every weekend, up and down the country.

Fights are weighted in the home corner’s favour in several ways. It is in the interest of the promoter if the ticket-seller keeps winning, because they’ll keep selling tickets and, who knows, they may actually develop into a truly lucrative proposition for TV promoters further down the line. And that need for development, from the boxer’s point of view, is of course understood. Yet what we’re left with are too few contests that actually pit a developing fighter against a developing fighter. And if you’re a young fighter who can’t sell tickets, or finds the process difficult or insulting, chances are you’ll quickly end up in the away corner, even if your talent deserves better. Any semblance of sport and competition, therefore, is too rare when you take professional boxing as a sum of all parts.

To use the term ‘fixed’ would be incorrect, however. The away fighter does not have cash shoved into their shorts and told to go down in a certain round. But actually going all out and trying to win is rarely encouraged. If they do win, they might find that they won’t be invited back to the away corner for a while, so their earnings are at risk. Furthermore, anyone who has spent time in and around the small hall scene in Britain will have heard journeymen being told to go easy on certain fighters in the name of education for the up and comer – teach them a few things, but don’t embarrass them; show them the ropes, while ensuring they don’t stay on those ropes for too long.

It’s also only fair to point out that, in most cases, the home fighter is better than the away fighter. Way better. Predominantly, the victories gained are thoroughly deserved. Yet that alone should be bothersome to those of us who prefer fights to be evenly matched.

Why it continues and why ‘boxers’ like KSI – a social media phenomenon with millions of followers – won’t be going away any time soon, is because it does appeal to those who are actually buying tickets for small hall boxing or pay-per-views to watch YouTubers. It appeals to the friends, families and associates who are there to cheer on the ticket-seller. They feel like it’s money well spent to see their buddy/brother/sister/colleague win at a canter while having no comprehension of the context. In a similar way, it appeals to the millions of fans of the YouTube superstars. How many of those then become fans of boxing, as opposed to an individual, is a valid debate. That’s often the excuse, isn’t it? Without YouTuber, says promoter, nobody would get to see [the second rate rubbish on] the undercard. A less cynical outlook is that without YouTuber, kids wouldn’t be queuing up outside boxing gyms in the hope of becoming the next YouTuber. The jury is still out on both arguments.

A key difference between KSI pantomimes and small hall boxing is that the former is a guaranteed money-spinner and the latter is not. It’s easy to blame the promoters for staging what is too often dross to the likes of you and I. But in order to make the smallest of profits, break even, or ensure losses are kept to a minimum, their ticket-sellers have to be nurtured carefully.

The problem with this is that professional boxing has become a glorified popularity contest that does little to attract longstanding punters. As with most things in boxing, without any specific structure or fixture list, it’s fly-by-the-seat-of-your-pants short-sightedness. If you can sell tickets, you will be looked after. If you can’t, then your path to the top simply won’t exist. The consequence, whichever way you look at it, is countless unfair fights.

It would be easier to stomach if, at the top level, the best consistently fought their closest rivals. If, once fighters had completed their preliminary years, the mismatches stopped. That is not always the case. Even at and approaching ‘world title’ level, the best are too often protected in a similar way, relatively speaking.

In short, before you get too outraged about KSI and the like coming along to take boxing for all they can get, take a closer look at the workings of a sport they have realised is ripe for the taking.