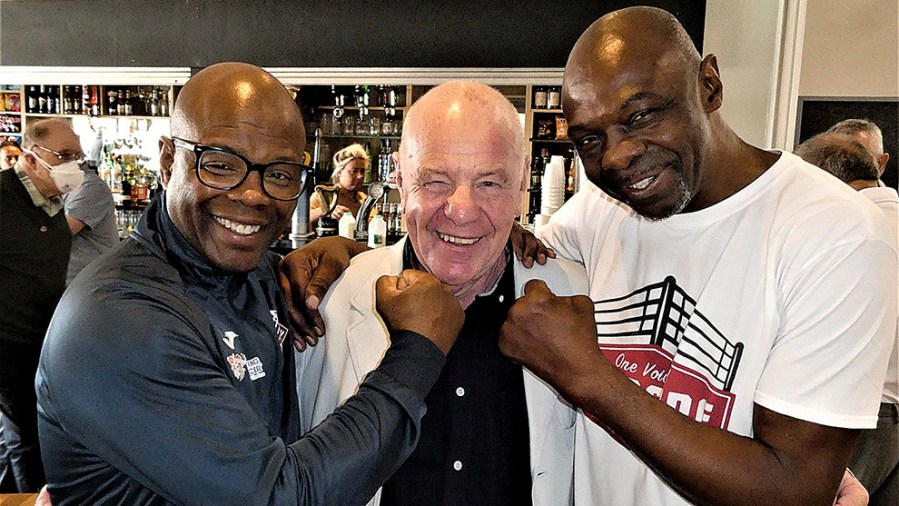 It shouldn’t be so hard for an industry to work together, writes Matt Christie

JIMMY BATTEN, the man who went 10 rounds with Roberto Duran in 1982, will openly tell you he has brain damage. He nonetheless still adores the sport of boxing and is a keen advocate of Ringside Charitable Trust (RCT).

At a RCT publicity event last Thursday (September 1), Batten was one of several ex-boxers who were there to fly the flag. Others included Duke McKenzie, Allan Richardson, Pat Doherty, Ross Minter and James Cook, while the British Boxing Board of Control was well represented by General Secretary Robert Smith and Vice Chairman Guy Williamson. Jerome Pels, the new CEO of England Boxing, was also in attendance. No promoters or active fighters were there.

Batten told Boxing News, “I knew there was something wrong with me but I didn’t know what had caused it. I was later diagnosed with dementia pugilistica and it’s steadily got worse.”

The former British super-welterweight champion’s memory is poor, his speech is slurred, his hands shake, but he has retained his sense of humour. If he could go back to the start of his boxing career, which ended in 1983, he would do so in a heartbeat. With one caveat.

“I wish I had been told about the dangers,” he explained. “We knew it was a dangerous sport and we could get hurt in the ring. But we were never told about what could happen to us in the future. It may not have made any difference, I probably would have carried on anyway, but I wish I’d been warned that I may end up like this.”

This need for education was emphasised by one of the speakers at the event, Tris Dixon, the former BN editor and author of Damage: The Untold Story of Brain Trauma in Boxing.

“I still speak to boxers today, on both sides of the Atlantic, who don’t know what CTE [chronic traumatic encephalopathy] is, and haven’t heard of it,” Dixon said. “That’s not right. Fighters will say they know the risks but too many are only talking about what may go wrong on fight night, and not many years after the final bell has sounded. It’s time boxing, and the way it’s structured, changes and stops taking so much from our warriors and starts giving back.

“Here and now, [RCT’s] Dave Harris is drawing a line in the sand and saying we must do more. And we have to, our voices have to be heard. We still have the opportunity to get in front of this problem, to be seen to be doing something, but I fear time is running out. Other sports do so much more to help their athletes yet we watch the scrapheap mount up. Our fighters deserve more. I’m asking boxing, the promoters, the fighters, the fans and anyone who loves this sport, or claims to love it, to please support Dave Harris and Ringside Charitable Trust, to make sure our heroes remain champions and warriors, once the final bell has sounded.”

Plenty of boxers go through their careers without a thought about tomorrow. By the time the punches and years of hard sparring suddenly catches up with them, and it can happen quickly, it’s too late. Which is why Ringside Charitable Trust is so important. They can provide the aftercare system that boxing so badly needs. Harris spoke of the wall of silence he’s constantly battling against. He is not asking for a penny from promoters, merely their attention, to discuss new ideas, like the possibility of putting QR codes on fight tickets so punters can donate. Simply, he wants the industry to work together.

The call for unity should by now be deafening. Too many, however, are unwilling to listen. Too many in the industry – including top trainers – will admit they do not want to read Dixon’s book for fear of what they may find. It’s understandable to a degree, but ignorance is not the answer.

Robert Smith, whose work in improving the safety procedures in boxing is to be admired, was keen to point out that times could be changing. “We’re talking here about fighters that retired a long time ago,” he said. “We are working hard to educate the boxers of today and I’m confident that, in years to come, we will see the benefits of that education.”

In recent years, we have seen fighters like Carl Frampton, George Groves, Anthony Crolla and Darren Barker walk away as young men, citing concerns about their future as one reason behind their retirements. They could be described as the lucky ones, retiring with financial security after fulfilling careers. Yet futures are never guaranteed. Just ask Jimmy Batten, who was 27 years old when he had his last fight.