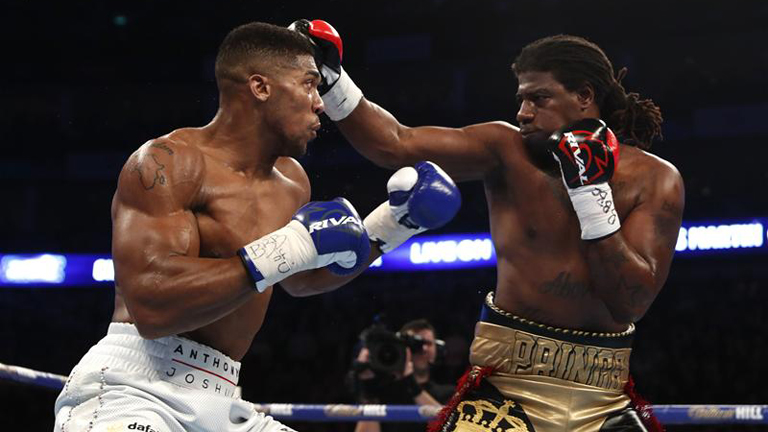 TYSON FURY holds the WBO and WBA world heavyweight titles, Anthony Joshua has just won the IBF belt, they’re both British – surely they have to fight. Promoter Eddie Hearn says he wants to hold the massive unification clash before the end of 2016.

Hearn suggested, “I think Tyson Fury’s an easy fight for Joshua. I see no problems in that fight at all. I think he knocks him out convincingly. I think he does exactly the same to him as what he did to [Charles] Martin. He’s too slow. People say [Wladimir] Klitschko couldn’t get him out, Klitschko never had the no fear policy and the speed and the power.”

The magnitude of that showdown is not lost on the promoter. “Now you’ve got two Brits in a unification match. It’s never happened before and it will never happen again. Fury will take the fight. He doesn’t mess around. They’re going to see a million and a half, two million pay per view buys and say right! I haven’t spoken to AJ about it but in my head it’s a unification match, 50-50 split, I think the Furies would be on board with that, he’d deserve it because of who he’s beaten and the belts he’s got. Financially it’s huge. I don’t think Tyson Fury or Peter Fury will have problem stepping in the ring,” Hearn said. “They don’t mess around.”

Hearn sketched out the possible route Joshua could take, leading Anthony to fighting Fury as soon as this November. “My plan is to fight on July 9 or wherever, then to go in mid-early November and then look at our mandatory. Now the unification would allow us to avoid the mandatory if it wasn’t the right guy, i.e. commercially great for us. But again Joseph Parker could be a great fight for Joshua, that could be a big fight. It’s like this massive jigsaw at the moment but you can’t really wait on these fights because sometimes they just don’t happen. But with Fury, all of a sudden, maybe November is the time to make the fight,” the promoter said.

There is a fortune to be made out of that contest. “It’s certainly a double figure digit million pay day for both of them. Sterling,” Hearn declared.

David Haye is also looking for a shot at Joshua, but Hearn is in no rush to make that fight. “David Haye as well is a dangerous fight,” he said. “I think down the line that’s one of the toughest fights in the division for Josh. I do think though if Josh hits him on the chin… I’m not really looking at Haye. I know it’s there and I know it makes sense but at the moment… I think down the line for sure.”

The promoter continued, “I rate Fury but I think after the Klitschko performance people have got false illusions of how good he is. Are you bothered about Tyson’s power? I’m not saying he can’t punch but you don’t go in and say he’s dangerous. He’s not, you’ve just got to try to nail him down.