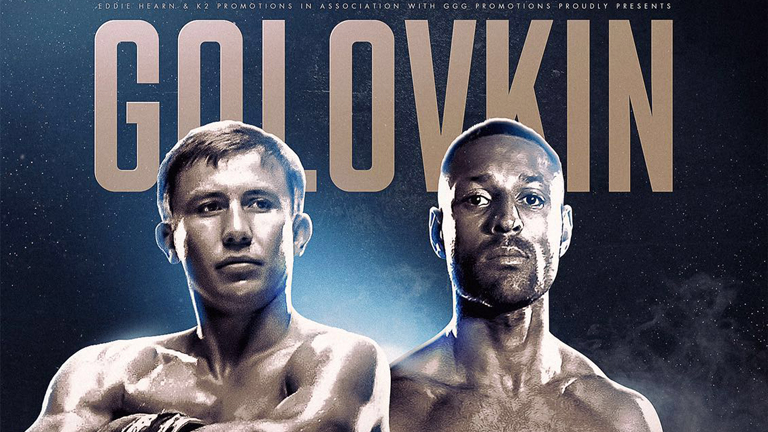 Gennady Golovkin vs Kell Brook was made in a matter of days, Eddie Hearn tells George Gigney

In a stunning announcement earlier today, it was revealed IBF welterweight champion Brook will jump to 160lbs to take on the fearsome Kazakh, who owns the WBC, WBA and IBF world titles.

Hearn was deep in negotiations for Eubank to get a fight with ‘GGG’, but has revealed Chris and his father missed their chance and Brook wasted no time when presented with the offer.

“We were negotiating the Eubank fight for a long time, as you can imagine that was extremely difficult, we got close,” he told Boxing News.

“We set them [the Eubanks] a deadline and it wasn’t adhered to. They didn’t come back in time for the deadline. I phoned Kell later that night to talk about Vargas and I said ‘Do you want to fight Golovkin?’

“He asked if I was serious and I told him I hadn’t spoken to them [Golovkin’s team] about it but I know they’d love it, it’s a huge fight and he just said ‘yeah, I’ll fight Golovkin. 100 per cent.’

“So we moved probably within 24 hours. It happened over 36-48 hours, and I didn’t want to get involved in any of the speculation because I didn’t want to ruin the chance of Golovkin fighting in the UK.”

Eubank Jr has since taken to social media to refute the claims he stalled on signing a contract.

I haven’t been shown one contract since my fight with GGG was announced. I’m still ready & waiting to sign. Fighting Brook is a joke #2Small

The unbeaten pair will meet at the O2 Arena in London, with Sky Sports Box Office broadcasting the pay-per-view show in the UK and HBO picking up the US TV rights.

Brook was also set to meet WBO welterweight champion Jessie Vargas later this year, though an announcement was never made, making the Golovkin-Brook confirmation even more shocking.

Much like Eubank Jr-Golovkin, Hearn was close to closing the deal but there were still obstacles.

“They were close, we were always a little bit out with the money, trying to get a date. When the Eubank-Golovkin fight came about that was a big opportunity to bring Golovkin to the UK and I really wanted to do it, but it meant we’d have two pay-per-view dates and it’s very difficult setting the dates for those fights,” he continued.

“The dollar rate – and I know I get stick for mentioning it – it added 12 to 15 per cent onto the Vargas deal, it was a killer. But everything’s just slotted into place.

“It’s a standard pay-per-view deal, it’s the same deal Anthony Joshua’s on, the same deal Carl Froch was on. We give them ownership of the profit of the show and we take a percentage. It’s the most transparent deal out there.

“Yes, Chris Eubank Jr was offered the same deal that Kell Brook accepted, it’s the same deal Anthony Joshua’s on. We were ready to sign the fight for Eubank, but they made it so difficult.”

Eubank Snr allegedly caused most of the issues, demanding control of operational aspects on the night.

Brook has been installed as a heavy underdog for the clash, due in part to the huge leap in weight he must make to face arguably the hardest puncher in the sport today. However, per the IBF’s rules, there will be a check weigh-in on the day of the fight, meaning neither fighter can massively rehydrate.

Indeed Hearn remains convinced that Golovkin, who stands an inch taller than Brook and whose reach is one centimetre longer, will not have a significant weight advantage on fight night.

“We know all about Gennady Golovkin’s weight, he’s not a huge middleweight – he’s a huge punching middleweight – but we also know we’ve got a weigh-in on the Saturday with the IBF, which helps a lot.

“On fight night I don’t think there’ll be a huge difference in weight, yes we’ll be giving away size but I think Brook carries power through the weights. He’s up against it, but we’re in it to win it, one thousand per cent.”

Since dethroning Shawn Porter in 2014, Brook has been unable to nail down the marquee fights his obvious talents deserved and fans had become disgruntled with his title defences against the likes of Jo Jo Dan, Frankie Gavin and Kevin Bizier.

Hearn, who always promised he would secure a big fight for his charge, is proud to have lured ‘GGG’ into the ring with Brook.

He said: “We’ve been looking for this kind of fight for Kell Brook for so long, and he’s taken some stick. He’s wanted to fight anyone, we made huge offers to Vargas, Broner but the fact is none of them wanted to fight them so he’s had to look up – against the most feared fighter in the world.

“It hasn’t really sunk in how good a fight this is, it’s two of the best fighters in the world, pound for pound. I’m over the moon.”