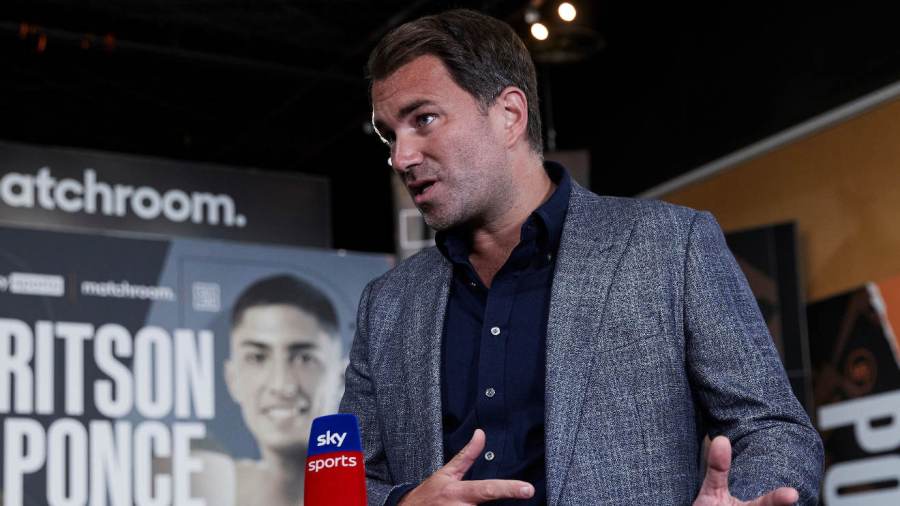 THERE was a time – not that long ago, in fact – when it would seem bizarre to hear Eddie Hearn heralding the death of pay-per-view in boxing. For so long the unofficial spokesperson for PPV boxing on Sky Sports in the UK, Hearn is now in bed with streaming service DAZN.

Speaking to Boxing Social, the Matchroom Boxing boss gave his view on the American PPV market, and he doesn’t hold much hope for it.

“You live in a world now, where, pay-per-view in America, you’re on a knife edge every time you fight, because it’s so saturated,” he said.

Obviously, due to his alignment with DAZN, Hearn isn’t approaching this with an unbiased view, but in fairness to him he has been speaking about the over-saturation of the broadcast market for several years now.

Unsurprisingly, he went on to say that he would advise fighters to seek out the guaranteed purses offered up by the likes of DAZN, rather than “gamble” on a share of PPV revenue. The question is: does he have a point?

It’s hard to argue with his assessment of American PPV price points; they are simply too high and while it’s hard to track legitimate viewing figures for these shows, it’s no secret that boxing is easily one of the most expensive sports to watch on television.

Add to that the fact that the main broadcasters of PPV shows in the US – Showtime, ESPN and FOX – are regularly pumping out cards that subscribers need to pay extra to watch and it becomes easier to see how the market might be in trouble.

As Hearn outlines in the interview, people consume content very differently nowadays and that is fast beginning to apply to sport as well. Aside from platforms like DAZN and ESPN+, streaming giant Amazon Prime is picking up more and more sporting content, from live tennis to the Premier League.

So, is PPV a dying industry in the US? At this stage, no. Fights like Fury-Wilder III would be almost impossible to make without the added injection of cash from PPV sales and a lot of the biggest names operating in the US still seem to prefer that model. There’s a reason Floyd Mayweather chose a PPV platform for his recent exhibition against YouTuber Logan Paul.

In fact, ESPN reported that talks are in an advanced stage for Canelo Alvarez to fight Caleb Plant on a FOX PPV later in the year. The Mexican superstar has fought on DAZN for the past few years but is now a free agent, meaning he’d be able to fight on FOX – if a suitable purse is offered, of course.

News has also emerged that Canelo is exploring the option of facing light-heavyweight destroyers Artur Beterbiev or Dmitry Bivol if the Plant fight doesn’t come off. If that’s true, it just further proves how determined Alvarez is in his pursuit of true greatness.

Plus, it’s also been reported that Gennady Golovkin has been approached about fighting Canelo later this year in what would be a long-awaited trilogy bout between the two. ‘GGG’’s team reportedly expressed that the Kazakh star is ready and willing to take that fight.

Whomever steps out of the opposite corner against Canelo in September, it seems they will be a top-drawer name. While Plant appears to be the current frontrunner, Beterbiev would be the most intriguing option out of those presented.

Super-lightweight king Josh Taylor also spoke with Boxing Social, and made some interesting comments about Gervonta Davis. The unbeaten Scot, when asked about a potential fight with ‘Tank’, was typically bullish in his response.

He said: “He is a very good fighter, very skilful, but he was getting outboxed by Mario Barrios. Listen, I’d absolutely destroy him. It’s a good fight, a big fight, but I’d absolutely smash him to pieces.”

This is undoubtedly one of the best fights that can currently be made in the sport; Davis is developing into something of a crossover star while Taylor has already proven himself one of the most elite fighters in the world.

However, based on recent comments from Davis’ team, the chances of that fight happening anytime soon look slim at best.

Fury-Wilder III has officially been pushed back to October 9 after the Brit and several members of his camp tested positive for Covid-19. Thankfully, Tyson remains mostly free of any symptoms from the virus.

The Athletic’s Lance Pugmire made the interesting point that the postponement could actually work out well for all involved. He noted that ESPN and FOX – who are sharing the PPV – will be able to plug the fight off the back of their NFL coverage, with the regular season beginning on September 9.

Plus, as mentioned on these pages, it means the fight takes place just weeks after Anthony Joshua’s title defence against Oleksandr Usyk, which hasn’t officially been announced but is set to go down on September 25. If Joshua wins, he’d surely be ringside for Fury-Wilder, right?

Dillian Whyte remains unhappy with these developments though, calling Fury all sorts of names in an interview with The Sun and suggesting the positive covid test was a smokescreen.