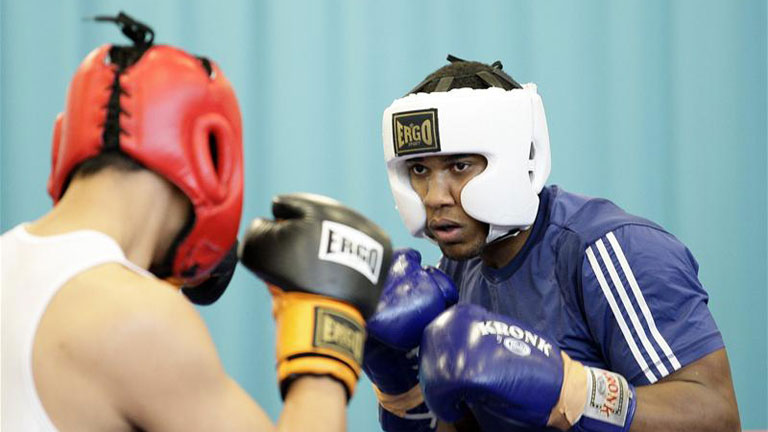 Eddie Hearn believes Anthony Joshua vs Eric Molina will do between 300,000 and 400,000 buys on pay-per-view

AFTER the window of opportunity to fight former champion Wladimir Klitchko closed, Anthony Joshua will now defend his IBF title against unheralded American Eric Molina. It will still be a pay-per-view on Sky Sports Box Office, with no variation in the £16.99 price per buy, it could be a hard sell. Molina is not an appealing replacement for Klitschko so the success of this show will be driven by Anthony Joshua’s star power alone. But promoter Eddie Hearn is confident that this bill could do over 300,000 buys.

“If it’s a smaller main event you get a much bigger undercard. If it’s a big main event like Klitschko, you’ll get a much smaller undercard. So that’s the logic there. The logic is can this fight or show happen without Box Office? Absolutely not. The other argument of why doesn’t Anthony Joshua take much less money. [Paying market value] that’s what you’re doing. As always we’ll put the show together. You have the option to buy it. I believe you’re going to get great value for money. I believe it’s going to be a great show. If it’s not, I’m sure you’ll tell us and I guess we’ll be judged on December 11. But it went on pre-sale today [Thursday], sold out in 11 minutes. It’ll go on general sale [Friday], so what does it tell you? It tells you he’s a huge star and people are desperate to watch him,” Hearn said.

Ticket sales are an indicator for how a fight will do on pay-per-view. “The only thing that will change is how many it will do,” he continued. “Look at [Dominic] Breazeale. I think Molina is a better fight than Breazeale and I think this is a stronger card. So if you apply that mathematics to it, it should do the same or more. It probably won’t but we’re talking about that fight doing circa 400,000 buys, it’s a lot of buys. People keep talking ‘oh, Joshua’s numbers are falling’. They’re not. They’re not at the gate, they’re not at the Box Office. People will make their mind up. I think this will be somewhere between 300 and 400,000 buys. Maybe it won’t be. Don’t forget Quigg-Frampton was significantly lower, Froch-Kessler was significantly lower. It’s only because we’ve been blessed with pay per views over the last two years that have been four, five, six [hundred thousand], a million and then the odd one that’s 250 [000].”