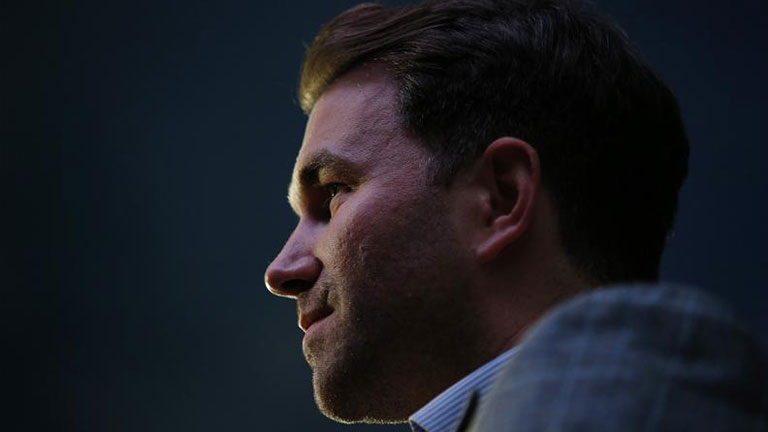 Eddie Hearn says talks with Mikey Garcia and the Charlos are on going, writes John Dennen

THE race is on for Eddie Hearn and Matchroom Boxing USA to sign high profile American fighters to headline on the US bills that will be streamed on DAZN as part of their landmark deal. The first American show is slated for September. No major names have been announced yet but Hearn is reaching agreements with eight fighters. “Some are world champions, some are undefeated fighters, some are amateur stars coming up,” he points out. Meanwhile talks with the likes of Mikey Garcia and twin brothers Jermell and Jermall Charlo are ongoing.

Intriguingly Hearn is also keen to sign Julio Cesar Chavez Junior, the son of a Mexican legend who hasn’t boxed since his comprehensive loss to Canelo Alvarez last year. “Chavez Junior’s definitely in the mix,” Hearn said. “When you’re hitting numbers it’s not always about these elite, hard core guys.

“He hits huge numbers, and he can fight. There’s a guy you can get a run behind, start doing some big shows in LA with and then you stick him in with an 168lbs world champion and you have a huge fight doing huge numbers and huge subscriptions to a Hispanic market. So Chavez is definitely of interest to us. There aren’t many fighters we’re not speaking to. You can’t have a promoter, we’re not interested in litigation and mess and breaking contracts. We’re dealing with the fighters that don’t have a promotional deal or are PBC fighters because they don’t have promoters.”

Previously Adrien Broner contemptuously tweeted the details of a generous offer from Hearn. He has messaged the promoter since. Hearn has not replied. “He wants me to make him another offer. But I’m making a lot of offers to a lot of fighters. The offers than I’m making are significant. I saw Charlo’s comments, which were: ‘we’re already making that kind of money.’ Absolute rubbish. And they know that,” he said. “We’ve built our UK business on paying exactly the right money for what the fight is worth, sometimes probably more but in general. Over here we’re having to overpay massively. The numbers that I’m throwing about no one else can do.”

He wants three key fighters to be the stars of this new platform. “I only want one, two, three max major names. My selling point is, you’re going to be the focus of the platform,” Hearn said. “Do we have a Mikey Garcia, or a Charlo or a Broner yet? No. But we don’t want too many of them. We only want one or two. Talks are ongoing with Mikey Garcia, we had a brilliant meeting and he’s extremely interested. He’ll fight [Robert] Easter on the 23rd then we’ll pick up talks for him to box potentially on the platform in November. The Charlos there’s an ongoing conversation with… They want ‘Lions Only’ promotions to be Mayweather promotions. As I said to them, we have no problem working with ‘Lions Only’ promotions. They just need a promoter. So does Mikey Garcia.

“[Garcia] is probably one of the best fighters I’ve ever seen and no one really knows who he is. Same with the Charlos, same with Deontay Wilder,” Hearn continued. “Advisers and managers don’t really want a promoter involved. Because they want total control. [Al] Haymon and other advisers should be looking at some of the deals that are being offered to the guys that they perhaps can’t do the right job for and, rather than say no, no, say, ‘You’re getting more money than I can ever give you, you’re getting more activity than I can give you, you’re getting more promotion than I can give you, as my client I have to tell you – this is good for your career.’ But that won’t happen.

“No one’s going to want to do me any favours.”

He is adamant that the overall package they’re offering will be appealing. “In terms of the marketing spend, the cross pollination with Warner Music, Spotify, all these ideas, this is what we will show the fighters when we talk more in depth with people like Charlo and Garcia. When they come to see us, which will happen over the next weeks and months, they will get to understand a lot about the machine behind this thing. Some will poo poo it and try and make out like it’s some geezer who started a streaming service from his bedroom,” Hearn said. “You’ll also probably see quite a few relationships blooming between DAZN and other platforms and broadcasters to give exposure to fighters. One of the arguments will be they’re starting from scratch with subscribers. Don’t rule out DAZN teaming up with a major network to show the fights, possibly on delay, to hit numbers.

“This isn’t a boxing channel, this is a sports channel and sooner or later they’re going to be acquiring NFL, NBA, tennis, everything. But they’ve got at the moment sixteen US shows, sixteen UK shows and another major announcement coming at the end of June, with a load more boxing content for US subscribers which they’re going to be over the moon with. I would say they’re probably up to 50 dates a year already. BoxNation is £12 a month, this is probably going to be the same or cheaper and it’s a sports platform not a boxing platform, but already they’ll have 50 dates.”