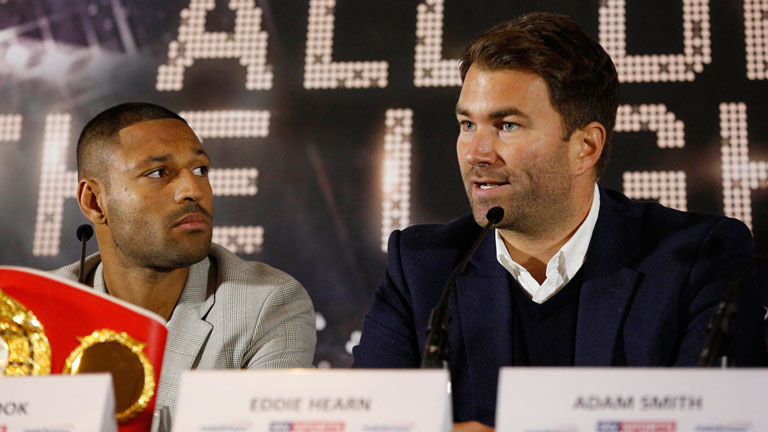 KELL BROOK’S decision to leap two weight classes and challenge one of the best fighters in the world, Gennady Golovkin, on September 10 was not exactly a predictable one.

He holds the IBF title at welterweight, is unbeaten and seemingly had some decent options at 147lbs – he certainly didn’t have to jump to 160lbs to fight IBF, WBA and WBC king Golovkin.

However his promoter, Eddie Hearn, believes Brook’s shock decision was born out of the unprecedented success British boxing is currently enjoying.

“But now, if you’re not a world champion you’re kind of irrelevant in the commercial world of boxing, which is OK because you can get there. But when you become a world champion, you haven’t cracked it – you’re just one of the club. You need to go to the next level to become a superstar.

After his title-winning effort against Shawn Porter in 2014, Brook struggled to nail down a defining fight and grew frustrated at constantly having to fulfil mandatory obligations, swatting aside the likes of Jo Jo Dan and Kevin Bizier.

He jumped at the chance to fight Golovkin and the contest was made in a matter of days. The shock announcement was much like the unexpected news earlier in the year that Amir Khan would move up in weight to fight Canelo Alvarez.

“This will surpass anything anyone has done in British boxing for years and years. To be a great, you’ve got to do something great, it’s not just about the belts,” Hearn continued.

“Maybe Khan fighting Canelo also played a part. Maybe Kell thought ‘well you did that, I’m going to do this.‘”

Though he has garnered a lot of respect for taking the fight, Brook is still a hefty underdog going into the fight – but just try telling Hearn and co. that.

He said: “We know it’s a big ask but the team are really excited and confident to finally see what he can do because everything he’s done so far has been with ease – other than when he’s messed around a little bit in fights, but we’ve always thought ‘if he didn’t deplete himself, what can he do? The kid’s a beast.’ Unfortunately for him, he’s fighting another beast, the biggest beast at 160lbs.

“That’s what makes it so exciting and so fascinating. From our camp, we know the task ahead and you’re not going to get Kell Brook feeling defeated already. He’s not like that. He’ll be first to everything, first to the jab, first to the punch, he won’t be waiting for the power.”