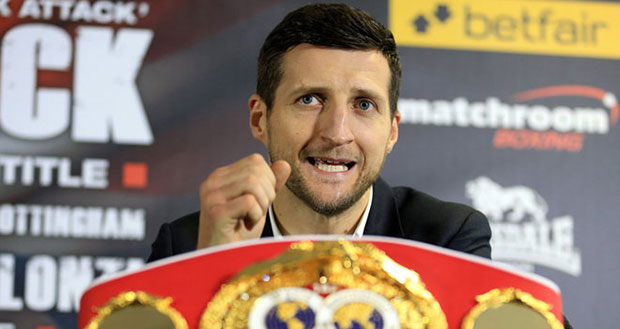 TALKS have started again for Carl Froch-Julio Cesar Chavez Jnr. How likely is that fight?
Eddie Hearn: The talks have started again. Bob Arum has mentioned the date January 24, but we’ve given ourselves 10 days to two weeks to decide what we’re going to do. It’s still a long way from being down and we’re still looking at other options as well, but we want to get moving now.

WHAT other options are there?
EH: [Mikkel] Kessler and [James] DeGale. It’s still a three-horse race. Carl’s talking about potentially not fighting until 2015, but if he is going to fight this year we want to know sooner rather than later. So in 10 days to two weeks, we’ll be finalising our plans.

HAS too much been read into his comments about Gennady Golovkin?
EH: He made those comments before the Groves rematch on a Facebook debate with [Sky’s] Adam Smith. A lot of those comments were off the cuff while he was playing mind games with Groves. We’ve since had a chat about Golovkin and Carl’s definitely aware of Golovkin’s power and ability, but the bottom line is, as we’ve been told from HBO, Froch-Golovkin is not pay-per-view so you can’t consider that as an option, but Froch-Chavez is pay-per-view.

People are telling me on Twitter that Froch-Golovkin is PPV, but the people who actually make the decisions at HBO are saying otherwise. What people have got to realise is, to the hardcore boxing fan, Golovkin is God at the moment, but outside of that, he’s not quite there yet. I’m sure in six months or a year, he probably will be. Then we can talk about that fight. If the deal was right, Froch would have absolutely no problems fighting Golovkin at all. But, there would have to be huge money on the table, and for that, it has to be a dual PPV.

WERE you impressed with Golovkin?
Yes I was. But if you break down his opponents there isn’t really anything on there. But no one had done that to Geale before and that was the impressive thing. Geale, and I don’t like to use the word quit because he’s brave to get in there in the first place, but he didn’t want to know once he’d got up. If you want to be critical of Golovkin you can break down his opponents and show they’re not absolute elite level. That’s not Golovkin’s fault because you have to pay an absolute fortune to get anyone to fight him. The problem you’ve got is there’s not enough money in the pot for the bigger names to fight him. He hasn’t got the commercial name to draw the casual fans yet. There is not 10million in the pot to tempt the likes of Cotto or Chavez to fight him, which is the sum they’d want for that kind of fight. It’s definitely a career-threatening fight. It’s all well and good the fans say make this fight, but it would be like me saying to you, ‘I’ve got this job for you, but you won’t get paid anywhere near what you should be, but everyone wants you to do it, so do it.’ You’d turn round and go ‘F*** off!’ Yes, Froch is financially comfortable, but that doesn’t mean he’ll get in the ring for less than he deserves, and that is a horrible, dangerous fight.

HOW close is Nathan Cleverly-Tony Bellew II?
Cleverly is away at the moment and we’ll sit down at the weekend and talk. November 1 at MEN, and November 29 at the [Liverpool] Echo are the frontrunners. The good news is they’re both desperate for the fight so it’s just about getting the numbers right. I’m a bit nervous about Manchester, but we know it will fill Liverpool, but will it do 20,000 at Manchester? My gut feeling is it will happen at Liverpool.