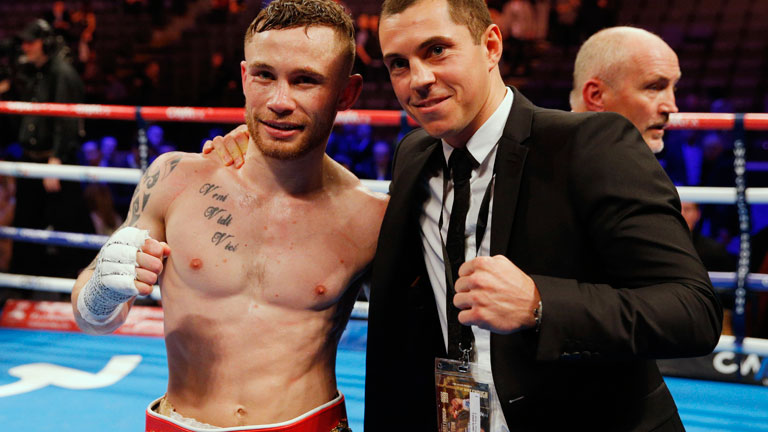 PROMOTER Eddie Hearn feels the super-bantamweight unification clash is bigger on a global scale than the rematch between Carl Froch and George Groves which filled Wembley Stadium in 2014.

Tickets for Frampton-Quigg at the Manchester Arena sold out in under 10 minutes and the fight will be shown on pay-per-view in the UK, with SHOWTIME broadcasting in the US.

While he admits the difficulty in matching the magnitude of Froch-Groves 2, Hearn feels the February 27 clash between Frampton and Quigg will make more waves worldwide.

“Obviously you’re always going to find it difficult to better Froch-Groves 2 but I think this fight, on a world scale, is bigger,” he told Boxing News.

“We’ve taken two super-bantamweights, which historically isn’t a division which attracts big pay days, and we’ve given them a pay day which really represents heavyweight boxing. On a world wide scale this fight is bigger than Froch-Groves 2. This is the second biggest fight I’ve made in my promotional career.”

Indeed, the winner will have to meet mandatory obligations which could include a fight with division-leader Guillermo Rigondeaux, who has labelled both men ‘cowards.’

Featherweight Leo Santa Cruz has also expressed his intention to call out the Frampton-Quigg winner should he beat Kiko Martinez, a former victim of both men.

Aside from Amir Khan v Kell Brook – which could still happen despite Khan agreeing to face Saul Alvarez – this was the biggest British fight that could have been made.

Hearn concedes there were several points during the negotations where he doubted Frampton-Quigg could be made, but also felt he had no choice but to get it over the line.

“We have an obligation to fans and broadcasters to make these kind of fights,” he mused.

“If we don’t make them, we’re not doing our job and people lose heart. We looked at Scott Quigg boxing on December 12 [last year] at the O2 but everyone would have said, ‘we don’t want to watch that fight, we want to watch him against Carl Frampton.’ It’s the same situation for Carl so ultimately it had to happen.”