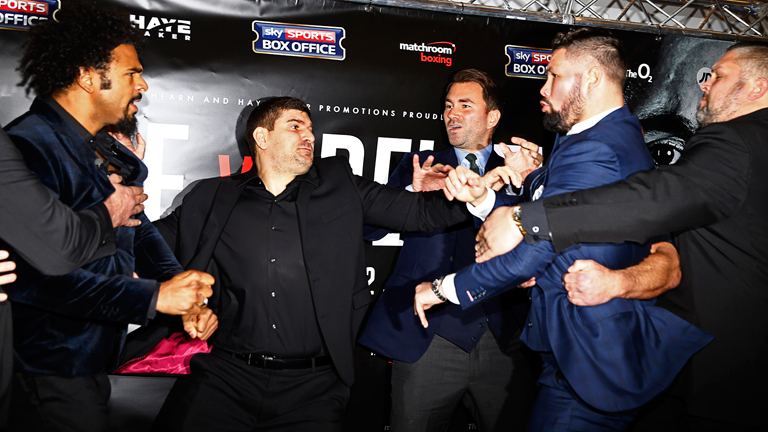 David Haye and Eddie Hearn have differing opinions on the negotiations

David Haye has questioned Eddie Hearn’s standing as a promoter after working with him to secure a blockbuster heavyweight clash with Tony Bellew.

Haye and Bellew have been involved in a war of words ever since the latter won the word cruiserweight title in May and last week it was confirmed Bellew will move up to fight Haye in March 2017.

Haye took aim at Hearn during a heated press conference yesterday and later claimed that he forced Eddie to keep quiet about their negotiations.

“I always keep my business close to my chest. I know Eddie likes to tell you how negotiations are going, I’ve never known someone to speak about things so much,” he said.

“You look at the Klitschko-Joshua fight, it was on then it was off – it was never on, it was never signed. So when you say it’s not happening everyone gets disappointed. That’s why I said to Eddie Hearn before this fight ‘shut up, don’t tell anybody you’re negotiating with me,’ because I didn’t want people to start nosing around. You do the deal, sign the deal, then you announce it, that’s how boxing works. I forced him to do that, he physically, legally couldn’t do it.”

Though the announcement of the fight was not wholly unexpected given the anomosity between Haye and Bellew, there were certainly no real indications that the fight was close to being made before it was confirmed last week.

As is usually the case, Hearn conducted the press conference yesterday, asking each person on the top table a series of questions – before it devolved into chaos.

Haye admits there is no bad history with Hearn, but he has become frustrated with the way the Matchroom boss conducts himself.

“It doesn’t go back, we’ve never had any altercations in the past it just gets to a point,” he continued

“[Sky Sports’ head of Boxing] Adam Smith should have been conducting the press conference, he’s the broadcaster, whereas Eddie is just a promoter like me. We’re co-promoting this, I’m technically more of the promoter than he is. It’s like me taking the mic and asking Eddie the questions. Why does he feel it’s his duty to start interviewing everyone? It’s just his ego. He can’t help but want to be centre of attention, he wants to talk for his fighters.

“It’s not about you, Eddie, it’s about your fighters. It’s not the Eddie Hearn show.”

Haye also provided insight into the negotiations for making the fight with Bellew, claiming that the stipulations he and his team communicated were met with no opposition.

He even admitted that he was willing to make concessions for the fight, such as allowing it to be made at some sort of catchweight given Bellew has never operated at heavyweight as a professional.

“He’s there to negotiate the best deal, we would have conceded on a lot of things but there was no argument whatsoever. He didn’t even say ‘how about we make the fight under 215lbs?’ Just to make sure I’m not too big. He never said a word. He never even mentioned ‘do you think you could make it under this weight?’ Which I probably could have done anyway. It would be something else to psychologically give his fighter a boost.

“All he’s focused on his himself and promoting himself and on fight night he’ll get a rude awakening about what is world class and what isn’t, particularly if he puts his boy Anthony Joshua in the ring with me. He’s strategically manoeuvred him away from danger and there’s no one more dangerous than myself. If he’s one day brave enough to do that. Once Sky see the numbers Sky will say ‘Eddie, free up your boy.’”

Boxing News put these comments to Hearn, who agreed that they did not dispute Haye’s demands – but only because Bellew was not fussed.

“I’m the licensed promoter, so it’s our show,” he told us.

“All those things we had to concede, we checked with Tony first. He couldn’t care less. ‘Tony, you’ve got to walk first.’ ‘Fine, don’t care.’ You’ve got to be in the red corner, you’ve got second choice of changing room – he doesn’t care. So that was very easy. Once we sorted out the financials it was a very easy fight to make. What Haye can’t stand is that he can’t make all the decisions. But that’s how it’s got to be.”

Hearn also feels his presence as a part of the promotion rankles with Haye, who allegedly tried to secure a fight with Bellew behind Eddie’s back.

“It kills him that I’m involved with this show, that I’m promoting it. He tried numerous times to get in with Bellew behind my back, ‘we don’t need Eddie’ but Tony was saying ‘yeah we do.’

“He likes to be in control, he likes to make all the decisions but he can’t do that. He whored himself out to all the broadcasters, all the promoters and he came back to where the money is – and that’s why he’s fighting, money. Forget ‘I want to be WBA champion, I want to be WBO champion,’ he was looking for the fight that makes the most money and at the moment, that’s Tony Bellew.

“Bellew, of course he wants the payday, he’s getting paid very well, but he also wants to win. That’s all that matters to him, especially after the press conference.”