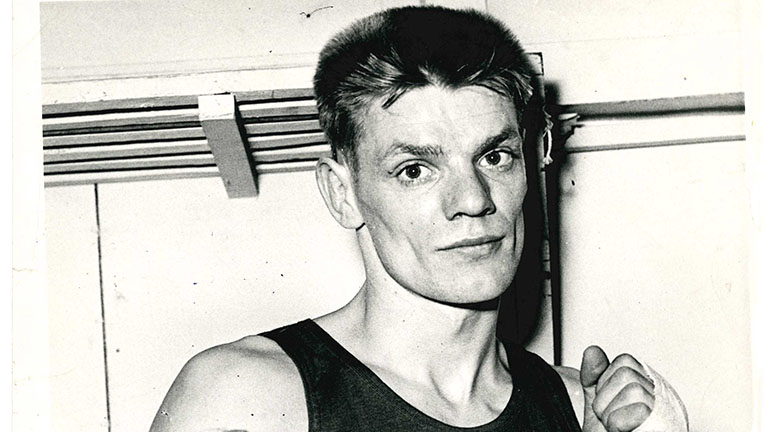 SOME people say size matters – others, that quality’s more important than quantity. Scotland’s Garnock Valley ABC had only five members, but all did well – and today all are members of the Scottish EBA, regularly attending meetings. Most successful was light-welterweight Davie Burns, who had over 60 bouts and lost just five – two to his great compatriot, Dick McTaggart MBE (pictured above). And the second verdict was close enough for argument. Throughout his career Davie was never put down, let alone stopped.

He might not have been able to overcome the legendary McTaggart, but in 1965 he stepped in at a day’s notice to replace Dick in an international against Denmark. Dick had to withdraw with a poisoned thumb, and Davie came in against Preben Rasmussen, who had boxed at the Tokyo Olympics the previous year, losing to the fine Ghanaian Eddie Blay (who as a pro fought for the world welterweight title). It was a big ask for Davie (who had to shed six pounds in 18 hours), but he rose to the challenge, dominating the first two rounds and flooring his rival in the last to take a well-earned verdict. As Scotland eventually won the match 6-4, that was a crucial result. Other Scottish winners included future pro champions John McCluskey (fly) and featherweight Ken Buchanan It was a great year for Davie, in fact. In other internationals he scored victories over fighters from England, East Germany, Romania and Switzerland. Though encouraged to go pro, he decided not to – and took up bowls, where he was also very successful.

The Scottish Ex-Boxers Association reformed in 1996, and the membership gradually grew – and as a result the five Garnock Valley members were reunited after 25 years. Which is what EBAs are all about. The other four were Bob Corbett, Tommy Marshall, Billy Hutchinson and Ray Caulfield – the last-named, of course, being London EBA’s current Secretary and Treasurer.

Croydon EBA enjoyed its usual happy monthly meeting, with the raffle raising £55. It was good to see Mick Hinton back after a few months’ absence. I produced a programme of a 1973 show at the old Cat’s Whiskers, Streatham – one of the first shows I ever covered. It was promoted by the late Arthur Brooks, and one of the bouts featured Mick against Liam White, of Wells. “He beat me on a cut eye!” Mick said – which was quite correct, in the eighth and last round. Top of the bill featured Liam’s brother, Kevin, who beat Scotland’s John Smith on points. Just over a year later I was at Wolverhampton Civic Hall, to cover Kevin White’s challenge to British super-welterweight champion Larry Paul. Kevin gave it a good try but Paul was riding high at the time, and boxed well to win a 15-round verdict. Paul – who later moved to the Croydon area and was an active CEBA member for years – sadly died in 2017.

There were several tributes to the late Ray Clarke, former Board of Control Secretary and CEBA President. Ray’s successor at the Board, John Morris, wrote to say he was delighted that so many attended Ray’s funeral, and he hoped the EBA revival would continue. Geoff Runacres (known professionally as Geoff Williams) recalled that Ray had started him off as a Board of Control timekeeper in 1962. Geoff now lives in Worthing, and can’t make CEBA meetings, but takes a keen interest in the Association.

Chairman Barry Penny thanked all members who had attended Ray’s and Committee member Ken Bunker’s funerals. “It keeps us on the map and shows we care,” he said. Barry reminded the meeting about Croydon’s Sunday Roast, set for the Masonic Hall, Oakfield Road, on October 27. It may seem a fair way off, but time passes quickly – and numbers need to be known. The inaugural Lunch last year went very well, and CEBA are hoping for a good turn-out this time – from both Croydon and other Associations.