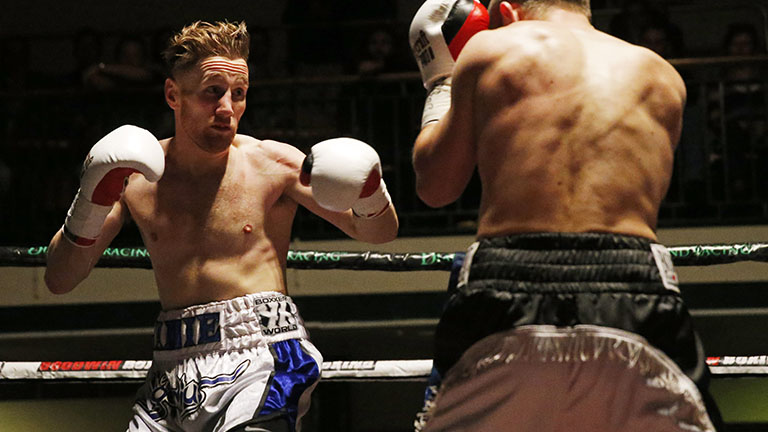 Brad Daws in no mood for hanging around, writes Andy Whittle from ringside

HARD-working Carl Greaves’ latest promotion, in the Albany Suite at the Britannia Hotel, comprised five bouts: a trio of four-rounders that went the distance and two scheduled sixes which finished early, one very early.

That very early one lasted just 40 seconds. Referee-for-the-night Shaun Messer intervened as usually durable Devon operator Jamie Speight, wobbled by a left behind the ear from Carlton’s Brad Daws, cowered in his opponent’s corner having also been tagged by a punishing left downstairs.

Brad had taken a mere 35 seconds to see off his previous opponent, so is on something of a roll.

Unbeaten heavyweight Ellis Machin from Huthwaite near Mansfield had an early night too, halting Hoddesdon’s heavier Colin Goldhawk 95 seconds shy of the halfway mark courtesy of a sustained burst of pressure culminating in a right uppercut and a pair of chopping rights.

It had been coming and the bearded visitor had done well to survive a barrage late in the previous session.

Two debutants won 40-36. Derbyshire’s Shinfield trained super-fly Liam Dring dominated despite Nicaraguan Elvis Guillen coming in well above the agreed limit, while switching Shepshed fly Benn Norman, with dad and ex-pro Shaun in the corner, impressed against Lithuanian Marius Vysniauskas, who in only his fifth paid outing proved a more than game foe.

Cynics might well have suggested a meeting of journeymen which pitched Newark’s Fonz Alexander in against Leicestershire’s Michael Williams could have been a tame affair. As it turned out nothing could have been further from the truth as both went for it right from the outset with Fonz ultimately winning by the narrowest of margins, 39-38 for Mr Messer, after a highly watchable duel.

I had it level at the finish but there were some who felt Michael, who landed several eye-catching rights, had done enough to nick it.