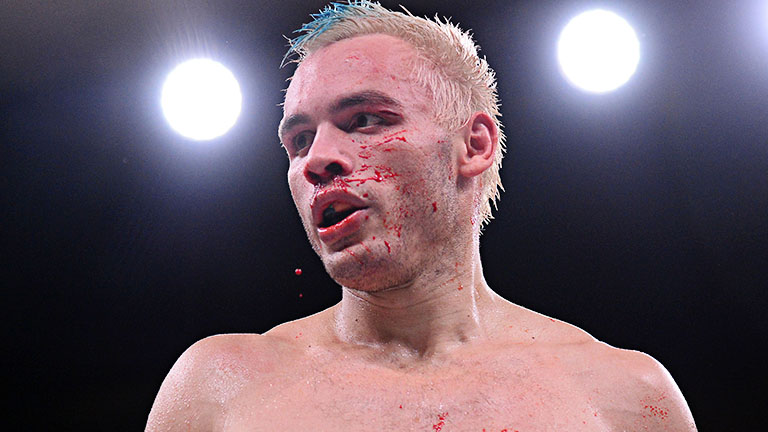 After a wretched defeat to Daniel Jacobs, it is a long way back for Chavez

DESPITE various infractions and behavioural issues in the past, Julio Cesar Chavez Jr has never had a problem securing high-profile, big-money fights. The likelihood is that this will not be the case anymore.

After pulling himself out of his bout with Daniel Jacobs after five rounds – a contest for which he came in almost five pounds over the 168lb limit – it is unlikely that he will be granted another such opportunity or payday, however much weight his name carries.

Going into his main event clash in Arizona last night (Friday December 20), controversy had surrounded Chavez due to his refusal to take part in a random VADA (Voluntary Anti-Doping Association) drug test in late October. To make matters worse, he was forced to give up $1m of his purse to Jacobs for missing weight so flagrantly. Nevertheless, he entered the arena as the crowd favourite in Phoenix, though he would not end up leaving the ring in the same manner.

In the opening couple of rounds, Chavez’s significant size advantage served him well as he marched forward on the offensive. This did not last long, however. From the third onwards, Jacobs – who was making his first appearance since moving up to super-middleweight – flummoxed and punished Chavez with his jab, movement and counter strikes.

After five frames, Chavez trudged back to his corner sporting a cut over his left eye and a bloodied nose. The Mexican “Son of the Legend” had had enough. He officially retired from the match, citing a broken nose and subsequent breathing difficulties as the reason.

The fans in attendance were not pleased with this turn of events. Not pleased at all. To demonstrate their discontent, they peppered Chavez with items of litter as he left the ring and made his way backstage. A cacophony of jeers accompanied the garbage that was raining down on the former WBC middleweight titlist. The 33-year-old claimed that the defeat was caused by Jacobs fighting “a dirty fight.” His argument was not convincing.

As for Jacobs, who got off to a winning start with new trainer Fareed Samad, the 32-year-old New Yorker can now look forward to a potential world super-middleweight title shot in 2020. Two possible opponents for the ex-IBF middleweight king are Matchroom stablemates Callum Smith and Billy Joe Saunders, who hold the WBA and WBO belts respectively.

On the Jacobs-Chavez undercard, Mexico’s switch-hitting Julio Cesar Martinez came through a bloody, all-action war with Nicaraguan Cristofer Rosales to record a stoppage victory at 1-19 of the ninth round. The win saw Martinez pick up the vacant WBC flyweight title – a strap previously held by Rosales.