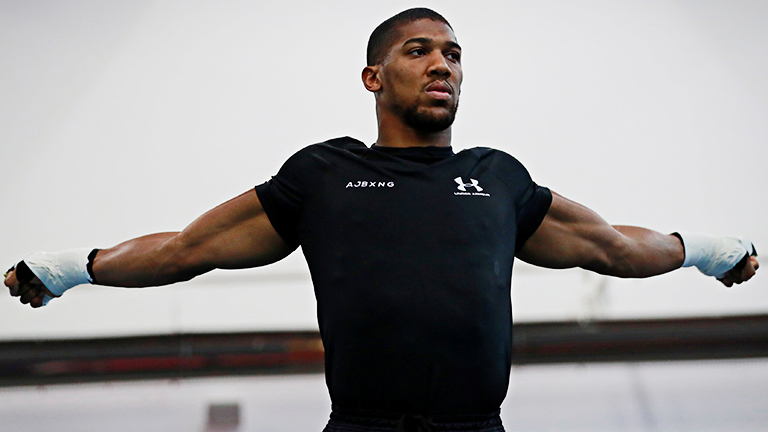 ON the day that it was officially announced that he would fight Californian Andy Ruiz Jnr on June 1, unbeaten world heavyweight champion Anthony Joshua painted a bleak picture of the sport’s current stance on the use of performance-enhancing drugs, describing doping in boxing as being “out of control”.

Joshua was originally due to defend his WBA, IBF and WBO titles against Jarrell Miller in New York next month, but that bout was scrapped when the challenger failed three separate drug tests for three different substances. Ruiz has now come in as a replacement opponent for the Madison Square Garden clash, with Joshua labelling Miller’s behaviour as “shocking”.

“Ruiz is more rounded [than Miller] and he’s better with his punch selection,” Joshua said of his newly confirmed rival. “It’s a tough fight. He comes across as one of those fighters who feels like he’s never been hurt. He comes to fight and probably has that confidence that he can walk through anyone. But Miller would’ve been tough, too, with his size and physicality. [After the positive tests], we now know why he was so physical and had such a high work rate.

“I had no idea he was on PEDs, because when I reflect on what I do, I assume that everyone else is like that – based on hard work, because that’s what I base myself on. I get tested about 16 times a year [during camp], maybe more. I’ve been on [the drug-testing programme] since 2010. It’s annoying, because [the testers] come morning and night, and it takes 45 minutes to an hour – urine and blood. But it pays off. Because we invest in the programme, they’ve been testing all of my opponents, but everyone’s been clean up until now. Now that it’s happened and it’s paid off, I’m like, ‘Thank God that the testers were so consistent with what they were doing.’”

The news that Miller has only been handed a six-month suspension by the WBA has been widely met with dismay, though, unfortunately and damningly, not much surprise. Joshua maintains that the current procedure for punishing drug offenders requires a complete overhaul, as a clearer and more structured penalty system needs to be implemented.

“The WBA have given Miller six months. I would’ve given him something different, so would someone else, so would someone else, and so on,” Joshua stated. “It’d be good to know that, if this is what you’ve been taking, this is what [punishment] you’ll get. That’s better than a group of people from the WBA sitting down and saying, ‘What shall we give him? Three months? Six? Nine? Let’s give him six.’

“I don’t know how the decisions are made, but it’d be better to know that, for example, if you’re on a certain drug, that’s a lifetime ban. It’d put more fear into fighters. A six-month ban? I haven’t fought since September last year [against Alexander Povetkin]. I could’ve taken human growth hormone [like Miller] after the Povetkin fight, got caught, taken the six-month ban, and still been able to fight in June. It doesn’t put any fear into fighters. They should start regulating it to say, ‘If this is what you’re found guilty of taking, this is what ban you’ll get.’ Then fighters wouldn’t take the risk.”

Although the cost of signing up to voluntary random drug testing ahead of fights is not cheap, Joshua feels that the decision to do so is vindicated when someone like Miller is caught. The 29-year-old Brit said: “Miller was on the proper stuff – the hard stuff. He should be looked at as a serious, serious case.

“Imagine if I’d have fought him, and then it came out after [about his doping]. I might not have been the same fighter. He might’ve taken something out of me because he’d have been so relentless. That’s why we pay the extra 30-odd grand to get proper testing, but not everyone wants to invest that money. After training camp fees, management fees and promotional fees, maybe there’s not much left in the pot to invest [for some fighters].”

In Joshua’s opinion, when a boxer fails a drug test, yet avoids a lengthy ban, this often comes down to one thing – money. In recent years in particular, cases of doping in the sport have been prevalent, with the powers that be seemingly incapable of enforcing an effective deterrent to counteract this critical problem.

“People are saying, ‘Ban Miller for life.’ But maybe those in charge are thinking, ‘Hang on a minute, he could earn us X-amount of money in the future, so let’s not ban him for life. Let’s give him a six-month ban instead.’ Money is God.

“Top, top guys [have tested positive for PEDs]. It makes you question how they’ve got to the top. I f**king find it hard [training and competing at the highest level]. Imagine me with a needle in my arse every now and again – I’d be flying! It’s weird, though, because even though [doping] is happening, it’s not taken so seriously by the people in charge. [Tyson] Fury has had his issues as well [with banned substances], but he’s fighting again and now it’s forgotten about.”

When asked what he believes it will take for the authorities to get tough on those who fail drug tests, Joshua’s answer was worryingly ominous. He declared that “it will take something serious to happen”, suggesting that maybe a boxer will have to suffer a career-ending injury at the hands of a drug cheat, or even die in the ring, before the true severity and dangers of PED use in boxing become evident to those who govern the sport.