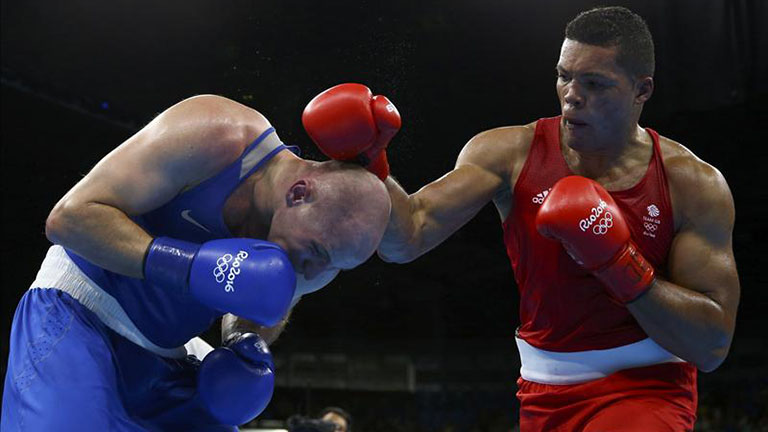 Joe Joyce is ready for the super-heavyweight showdown with Tony Yoka in the Olympic final, writes John Dennen

JOE JOYCE is an affable giant. He speaks softly, we know he’s multi-talented, from artwork to dabbling in martial arts and acrobatics. But in the ring he changes. Silent, staring implacably at his opponent, he grows increasingly intimidating. He looms bigger as the bout goes on, driving forward to land grinding heavy blows. From the outside what he does may look simple, but Joyce gets the job done. In emphatic style he dominated his opening contests at Rio 2016 to reach Kazakhstan’s Ivan Dychko in the 91&kgs semi-final.

“Tough first round, he [Dychko] was very quick, mobile, agile, keeping me on the end of the jab, long straight shots and it was quite hard to close him down I thought I’d be able to cut the ring off a bit better and catch him but he followed his gameplan well and was making it difficult for me. Obviously the second and third round I was closing him off and it was working. I think he was tiring, because obviously he couldn’t keep that up for the three rounds, like I can, so I started landing shots, he started to feel them, his face started to mark up and then I knew I just had to keep that up,” Joyce said.

In Sunday’s final he expects Yoka to take a similar approach to what Dychko did. “It’ll be the same kind of thing, he’ll be on his backfoot moving around, getting the jab off, being smart as he says. I just have to slow him down,” Joe reflected. “I obviously beat him before and he avenged his defeat and it’s now time for me to get my win again against him.”

Joyce is pleased to be lining up against Tony in the super-heavyweight final on Sunday. “His comments on Boxing News, I’m kind of glad I’m facing him after. He said I was a beast and not a smart boxer and hopefully I can prove him wrong in the next bout,” Joyce said, before suggesting, “He’s trying to get me angry.”

That though could be a mistake. A relentless, motivated Joe Joyce is a hard man to subdue. The Olympic super-heavyweight final is about get interesting.