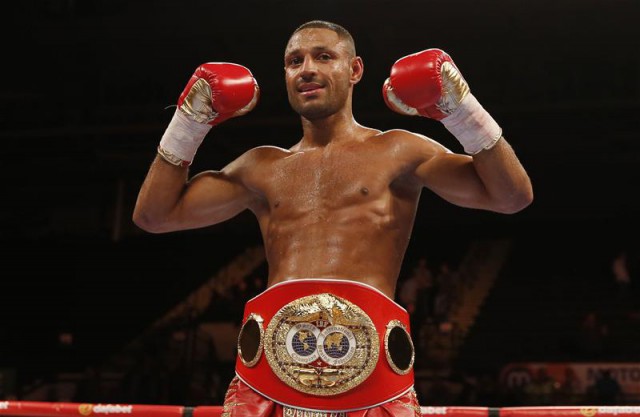 THE brief, harsh dramas that change the lives of fighters are usually enacted inside the ring. However, Kell Brook’s well documented and terrifying ordeal in Tenerife just six short months ago, spectacularly counters that reasoned train of thought.

Having starred the grim reaper square in the mugshot following a horrific attack by a machete-wielding lunatic on the Spanish holiday island in September, “The Special One” demonstrated his own terrifying savagery on his IBF mandatory challenger Jo Jo Dan on Saturday night; although his version was infinitely more legal.

Scant observers expected the rugged Romanian to ruin Brook’s emotional home-coming, but fewer still could have predicted the wondrous ease at which he dealt with his bewildered foe, flooring him four times in as many rounds. Granted, Dan had already succumbed twice to the Turkish fists of Selcuk Aydin, whose own career has stalled since losing his ‘0’ to former world champion Robert Guerrero by unanimous decision in July 2012, but no one had halted Brook’s latest opponent in 36 previous bouts.

The terrible simplicity with which Kell hammered his game, but ultimately limited prey, was as disdainful as it was demoralising, yet beautiful in its sustained brutality. Following Brook’s latest fistic juxtaposition, talk inevitably turned to a domestic dust-up for the ages; a welterweight showdown with Amir Khan.

Brook’s promoter Eddie Hearn cut a frustrated figure across the talkSPORT airwaves on Thursday evening’s Kick-Off boxing special. When asked about ‘King’ Khan fighting Brook, the Matchroom boxing supremo was dismissive of a match-up ever being made and seemed increasingly befuddled with Amir’s perceived procrastination.

However, Hearn’s post-fight ring interview with Sky’s Ed Robinson suggested a different picture altogether. If it was wasn’t quite desperation, there was certainly more than a whiff of exasperation in his voice when bidding to lure Khan to the ring on June 13; a date when the national stadium is vacant. Simply put, Brook needs Khan more than Amir needs Kell.

Of course, there are plenty of other appealing options out there for the IBF king. The grizzled Mexican warhorse Juan Manual Marquez rarely shirks a challenge and his visiting the Steel City would undoubtedly do fine business, as would a clash with a rejuvenated Brandon ‘Bam Bam’ Rios. But neither carry Khan’s profile on these shores or such seething ready-made animosity to the ring, and perhaps critically for Sky, box-office billing.

The Bolton man’s goading and incessant put-downs of Brook’s carefully-trodden, and at times stagnant career (the Sheffield man seems to have endured more eliminators than Hugh Hefner has had female acquaintances) have clearly cut deep at the man from the Steel City and the exchanged provocation casually running amok between these two fiercely proud combatants is gloriously genuine. Yet despite Brook’s shiny IBF strap, arguably, it is still Khan who holds all the aces.

Khan may be boxing’s equivalent of marmite on British shores; but what is undeniable is his devilish speed and raw fighting heart when thrust into battle. His stellar Olympic credentials, subsequent terrestrial TV deals and stateside appeal, mean that his profile has always dwarfed that of Brook’s outside of a hardcore UK following. (Brook’s perception of Khan bears many similarities to that of Marvin Hagler’s misgivings towards a seemingly spoilt and pampered Sugar Ray Leonard in the late 1970s in this respect).

The Bolton man’s mischievous lust for controversy also ensures that his name is never far from a tabloid taboo. The former light-welterweight king clearly lives by the mantra that there’s no such thing as bad PR, but perhaps his new bride is not so sure.

However, it is his exploits in the ring that have always justified his occasional air of arrogance towards his bitter domestic rival. Having brilliantly waded through risk-laden waters containing former world welterweight bosses Luis Collazo and Devon Alexander in the past 12 months, Khan can perhaps rightly claim a superiority complex over Brook in a loaded and delightfully deep 147lb kingdom. After all, the Bolton stylist was chief support for Floyd Mayweather Jnr’s first tear-up with Marcos Maidana and has already headlined bills in New York, Los Angeles and Las Vegas in his storied career.

Having seemingly come within touching distance of a dream fight with the two pre-eminent fighters (Mayweather and Manny Pacquiao) of this generation on more than one occasion, why would Khan want to risk it all in a domestic grudge match? Albeit a deliciously lucrative, fan-friendly one.

Amir is also managed by boxing’s omniscient and seemingly invisible advisor, Al Haymon, who has expertly assisted the fight game’s pound-for-pound king, Mayweather, for many a year. Should Floyd move to 48-0 on May 2, surely Haymon’s most infamous UK client would be the ideal dance partner to see out Money’s six-fight, $200 million deal on the Showtime TV network?

Of course, the thought of waltzing down Wembley Way on another balmy summer’s evening is enough to get British fights and Hearn’s pockets jingling with joy, but does the potential reward warrant the heinous risk for Khan? Not on your nelly. A loss would be catastrophic for Amir and would render his latest daring American dalliances pointless. Unfortunately for Kell, he may just be too special for his own good.

SUBSCRIBE to Boxing News – established in 1909 – for extensive ringside report