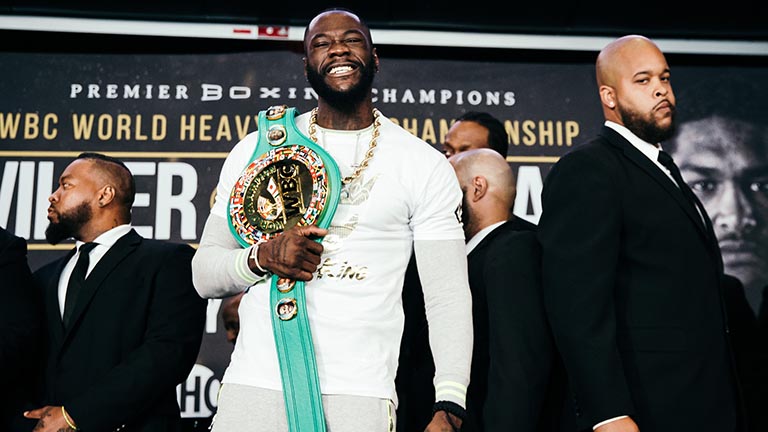 IN the next four weeks will see the three best heavyweights in the world in action. Obviously it is too much to hope for in this day and age for any of them to be fighting each other The good news is that none of them face an opponent who should really threaten their unbeaten record or in the cases of Anthony Joshua and Deontay Wilder their titles. I can’t see any of the top three going from these fights to a match with one of the others. They will all want one more fight with the plan being for a meeting either Joshua vs. Wilder, or Joshua vs. Fury or Wilder vs. Fury. A return between Wilder and Fury would be big but Joshua vs. Wilder or Fury would be the biggest money-wise. Those plans rely on the sanctioning bodies keeping their heads down as they have done so far. They all want to be part of one of those big fights.

Dillian Whyte has been No 1 with the WBC for 18 months without any effort being made to force Wilder to defend against him. Both WBA interim champion Trevor Bryan and IBF No 1 Kubrat Pulev have been on top for shorter times and if Joshua was looking to make another defence this year neither would pose a big risk. In the end it will came down to money, egos and promoters agreeing money and swallowing egos. I was feeling quite upbeat until I got to that last bit.

On heavyweights Kubrat Pulev is still trying to extricate himself from the troubles he brought upon himself with the forced kiss on a female journalist. He is being sued by the lady in question but equally as problematical is that before California will re-licence him he will have to go on a training course dealing with sexual harassment. If he does not do so then California will not re-licence him and that could mean he would not be able to fight in the USA.

In other heavyweight moves in his first fight since beating Alex Ustinov in November Mike Hunter meets Brazilian Fabio Maldonado on May 25. Maldonado is coming off points losses to Oscar Rivas and Olek Teslenko. In addition former IBF and WBA cruiser champion Marat Gassiev will have his first fight at heavyweight on July 27 but no venue or opponent named yet.

Interesting show set for Schwern, Germany June 15 with three former champions scheduled to fight. Tyron Zeuge, the ex-holder of the WBA secondary super-middleweight belt will reportedly face Spanish champion Adam Silvera for the vacant European Union title which seems a very sub-standard EU title fight, Jack Culcay the former secondary WBA super-welter champion tackles experienced Italian Stefano Castellucci and Juergen Brahmer the former WBO and secondary WBA champion at light-heavyweight meets unbeaten fellow German Nils Schmidt. Three not very competitive matches. Schmidt is 17-0 but of his last nine opponents eight of them only had 19 wins between them and the other victim had lost 6 of his last 7 fights. With the current state of German boxing they are taking no chances of their guys losing. Only two German fighters hold EBU titles, Agit Kabayel the heavyweight and Dominic Boesel the light-heavyweight and they have no world champions. Sorry I am wrong there Manuel Charr holds the secondary version of the WBA heavyweight title. That really is a case of chickens coming home to roost. As a result of their machinations the WBA are left with a champion who has not defended the tile he won eighteen months ago and he is supposed to fight at some time Fres Oquendo who has not fight since July 2014. It’s more like a fifth division title than a secondary. No one wants it and if the WBA ordered Anthony Joshua to defend against Charr they would be a laughing stock.

One German former world champion is busy and that is Marco Huck. He has a fight against Nick Guivas at the Foxwoods Resort in Connecticut on Friday night (May 17) then he has to fly back to Germany to oversee his promotion on May 25 in Salzgitter. I guess one more world title fight is Huck’s aim.

I was saddened to read of the death of Harold Lederman. He was one of the good guys a real gentleman who lived for and was passionate about boxing. He earned his living as a pharmacist but earned people’s love and respect as a boxing judge and as the man who scored fights for HBO. I first met Harold in the early 1970’s at a WBC Convention in Mexico City. His first words to me “what’s a stone?” That threw me until I realised he was talking about the term used in Britain for body weight. A couple of nights later he, Mickey Duff and I went to the world famous Arena Coliseo to watch the fights and Harold and I forged a friendship that lasted right up until his death. My life is less rich with the passing with Harold RIP.

It was sad to hear of the death of Bert “Smokin” Cooper from pancreatic cancer at the age of 53. For most of his career Bert was a name on an index card that I updated by pencil after his fights. When you physically write those details about a fighter you are almost living his career as it starts, progresses and ends. Bert kept me busy. He dodged no one and fought eight world champions. His only chance at a world title came in November 1991. When Mike Tyson and his replacement both injured themselves Bert stepped in at one week’s notice to challenge Evander Holyfield for the IBF and WBA titles. In the third round Bert nearly sprang what would have been the biggest upset in heavyweight boxing. A heavy puncher, 31 of Bert’s 38 wins came by KO/TKO; he nailed Holyfield with a right that had Holyfield sagging into the ropes badly hurt. The ropes stopped Holyfield from going down so he was given a count. Cooper rocked Holyfield a few more times but with such short notice he was not in condition and Holyfield stopped him in the seventh round. He fought them all but lost his battle with cancer. RIP Bert.

Female boxers are showing up their male counterparts. Where sometime it seems too many egos/promotion rivalry gets in the way of big male unification fights there seem to be no such problems in the female ranks. Last month Claressa Shields and Christina Hammer met with the IBF, WBA, WBC and WBO middleweight titles on the line and now Katie Taylor and Belgian Delfine Persoon fight at Madison Square Garden on June 1 with the same four lightweight titles on the line. That will mean two divisions totally unified. Male score on that = zero.

It is not unusual for a boxer to retire after a heavy defeat but in the case of the Dogboe family it is the trainer who is retiring. After his loss to Emanuel Navarrete Isaac has said the he will continue to box but move up to featherweight. His father Paul has said he will stop his work as a trainer. It must have been painful for him to see his son losing so heavily. The father/son bond adds another dimension to watching your fighter lose so I can understand his pain and it has to be said he has done a magnificent job by taking Isaac to a world title. I am not too sure how wise Isaac’s decision to move up to feather is. He is 5’2” and the 5’7” Navarette was just too big for him if he could get down to bantam that would seem a more sensible option.

Forthcoming fights: The big one of course is Manny Pacquiao vs. Keith Thurman on July 20 in Las Vegas with Thurman’s WBA welter title up for grabs. Manny is 40 and Thurman is unbeaten and strong so a very risky fight for Pacquiao. The “championship of the Garcias” looks set for August 13 with Danny fighting Mikey. Obvious Mikey is sure he can do better at welter against Danny than he did against Errol Spence. Anthony Yarde looks to get his world title chance against WBO light-heavy champion Sergey Kovalev in Russia on June 29. Kovalev will constitute a huge step up in the quality of opposition for Yarde. Kovalev is a few levels above Yarde victims Dariusz Sek, Walter Sequeira and Travis Reeves. Yarde’s power has been enough to compensate for his defensive deficiencies but that’s unlikely to be the case against Kovalev. On July 12 in Osaka Ken Shiro defends the WBC light-fly title against Filipino Jonathan Taconing. On July 13 in Carson, California Rey Vargas will make the fifth defence of his WBC super-bantam title up against former WBO bantam champion Tomoki Kameda. On July 20 Caleb Plant will make the first defence of his IBF super-middle title against 21-0 Mike Lee and July 27 in Baltimore Gervonta Davis will defend his WBA super-feather title. Yuriorkis Gamboa was originally to be the guy in the other corner but there is now a question over that. It is a long way down the line but it is reported that Ryad Merhy will take on Imre Szello for the WBA cruiserweight ‘Gold’ belt in Charleroi on October 19. Merhy is 28-1 with his only loss coming against Arsen Goulamirian for the WBA interim title and Hungarian “Imo” Szello is 23-0.

They are tough with their titles in France. From now on every French national champion must defend his title against his No 1 challenger every four months. No exceptions or exemptions and if the challenger refuses then he can’t fight for the title for a year – and Dillian Whyte has been waiting 18 months for a shot at the WBC title and Fres Oquendo has been waiting almost five years for a court decreed shot at the WBA title. Vive la France I say!