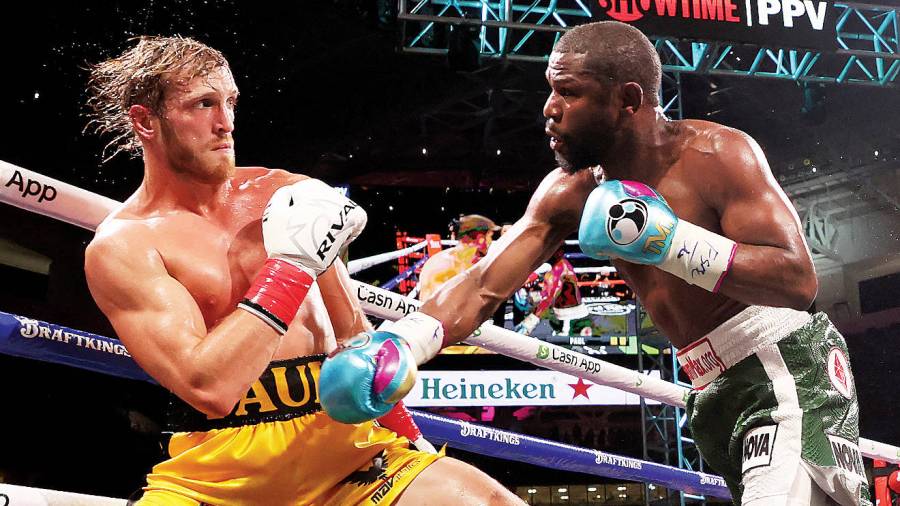 Steve Brenner was in Miami for the Floyd Mayweather vs Logan Paul exhibition. He spoke to the key players and considers what the event means for the future

IT felt like a proper American boxing show even though it was anything but. There was a healthy ringside mix of sports stars and rappers only the really cool kids have heard of. The undercard was lively with Jarrett Hurd and Luis Arias fighting out a real war which went in the favour of the man from Milwaukee who was almost reduced to tears after winning a split decision. Badou Jack made light work of Dervin Colina, a late replacement for substance abuser Jean Pascal while former NFL favourite Chad Johnson ticked off a bucket list item by stepping up and going four rounds with MMA fighter Brian Maxwell. There was a decent buzz at the home of the Miami Dolphins which had been converted nicely for fight night, even if the sporadic south Florida rain had punters – and media – running for cover a few times before the main event. And despite the sight of Logan Paul, a two-fight novice with a mouth the size of North America blathering on about how he was going to knock down a bloke who made a glittering career out of avoiding getting smacked, the presence of Floyd Mayweather certainly gave a wet and wild night in Miami some boxing credence. Of course, this wasn’t a proper fight. An exhibition does what it says on the tin.

It was interesting to see how Mayweather, all 155lbs of him, dealt with an almost 200lbs manchild who preferred to grapple and hold rather than engage with his fists. For the record, Floyd did what Floyd does. He ducked, he weaved, he waited for his moment and struck. When he countered, the attacks were measured and on the money. Paul deserves some credit for lasting the allotted eight rounds and with no judges for this unsanctioned affair, the 26 year-old has the solace of not losing for the second time in three ‘fights’. “Surviving against Floyd Mayweather is great in just my second (paid) fight,” said Paul. “I am happy.”

Whether Paul – ‘I’m a wrestler at heart’ –  will now stick to pranks and other nonsense on YouTube rather than darken boxing’s door again remains unknown. Once the money begins to roll in, no doubt another poor soul will be targeted. His even more obnoxious brother Jake has a multi-fight deal with Showtime and clashes with former UFC champion Tyron Woodley on August 28. Some were talking about Mayweather taking on the younger Paul sibling next. Give us all strength.

The fight was barely interesting yet this was, perhaps, a chance to see Mayweather, a true sporting great, in action for one last time. Any event with someone of his stature involved – no matter how banal or upsetting to the purists – will always garner attention. Sunday June 6 didn’t signal the end of boxing. The sport isn’t in the gutter because of a bloke like Paul who once tasered a rat. Boxing is alive and kicking in no small part thanks to the likes of Mayweather who hinted afterwards he was done for good this time. We’ve heard that one before but there’s no doubt the 44-year-old is a bona fide legend who transcends the sport.

“I know this wasn’t a fight for the boxing purist,” Showtime chief Stephen Espinoza told Boxing News. “I am one but the purist doesn’t want to see 44 year-old fighters. But you know what I would have? I’d rather see Floyd than not at all. It’s not even a close call.”

Taking Mayweather out of the equation, who else would get the attention, rightly or wrongly, this event did? Oscar De La Hoya vs Georges St.-Pierre? Mike Tyson vs KSI? No thanks. “There’s such a small universe of guys that you really want to see, “ continued Espinoza. “Someone like Tyson for sure but now you are talking about  two of the most famous people in the last 50 years, so it’s easy to say well, let’s bring back all the retired fighters.

“Look at what Floyd has done. He has been carrying this kind of event after he’s retired. It takes a lot. Maybe when you’re lucky you get one a generation. Sugar Ray, Floyd, Tyson, De La Hoya all did tremendous numbers.

“But there has never been anyone who’s done business at the level of Floyd has.

“He revolutionised the sport and was the highest paid athlete in the world. He set the precedent in terms of revenue revolutionising the business and sort of maximizing the financial return

“Floyd was at the first of the wave of athletes taking over their own careers, handling their own marketing. This sort of his approach to business is something that people will be feeling for a lot of years. “

“Floyd is a household name, a global superstar,” added Leonard Ellerbe, CEO of Mayweather Promotions. “His name is still very relevant with the mainstream fans. The purists, always going to be critics but even though it was an exhibition, he was in there with a heavyweight. So let’s put that in perspective.”

As Mayweather soaked up the adulation, Evander Holyfield sat still and was taking everything in. “I think this was good for boxing,” the former heavyweight champ, 58, told Boxing News. “When you have people come together and they create ways to make money , that’s an amazing thing. It’s all about the money you want to make.

“Floyd didn’t have to do it and neither did the other guy but it shows you life is all about the chances you take and what you choose to do.

“Floyd has the confidence in himself  to take a risk. I wouldn’t take a risk like that because I have too much to lose and not enough to gain.“

Yet in the very next breath, Holyfield smiled when asked about a return. He’s up for it and has been training  (two dates have already been cancelled) which throws up another difficult question and has boxing grappling with the moral compass again. Is Mayweather committing ‘legalised bank robbery’ by taking on a fit and powerful internet star – no matter how absurd and how lacking in skills he is – more or less acceptable than watching a former favourite heading towards 60 years old worryingly lace up the gloves for a final hurrah very few want to see?