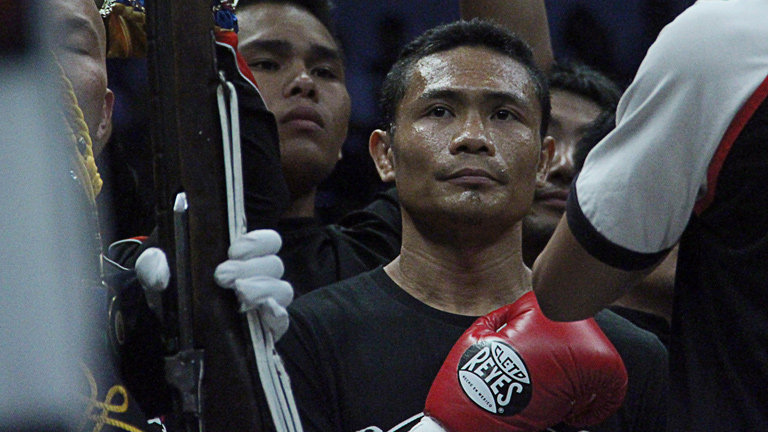 The fight, held at the StubHub center in Carson California as part of Pinoy Pride 38, was a one-sided affair in which Nietes controlled every round, acquiring the vacant WBO Inter-continental flyweight title in the process. The official scores read 120-108 all in favor of Nietes.

Sosa seemed to have no answer for Nietes’ offense throughout the match. The Filipino staggered the former WBC World light flyweight champion twice in the early rounds but the  cunning veteran found ways to slow down the action with strategic clinches when it mattered most.

Nietes was the more active and accurate boxer and won each round clearly. At each exchange he overpowered a rival that sought but found no answers to his speed and craft.

In victory, the former WBO champion at straw-weight and junior flyweight, acquired the vacant WBO Intercontinental flyweight title belt at 112 pounds and made a statement to the division that he’s a force to be reckoned with at, despite having just moved up in weight.

“I’m happy,” said Nietes to the Philippine Star after the fight. “I felt more comfortable inside the ring. I have no problem at 112 pounds. I did not go for the knockout as long as I get the impressive win. It was a good test for me going twelve rounds. He is a strong fighter.”

Sosa is a tough veteran with recent losses coming only at the hands of Roman “Chocolatito” Gonzalez, the number one pound for pound fighter in the world, and WBC world flyweight champion, Akira Yaegashi. He was an underdog walking into the ring against Nietes but few expected the Mexican former champion to be shutout so handily by Nietes.

There were many walkover opponents available to Nietes at 112 pounds but, instead, he sought a stiff challenge in his first fight at the higher weight, and impressed by carrying over not only his speed but also his power. Perhaps the phrase “tune-up fight” does not exist in Tagalog.

After witnessing “Chocolatito” take the toughest challenge available to him when he moved up in class himself earlier this month, it’s possible that the concept doesn’t exist south of 115 pounds at all. Take note light middleweights and light heavyweights.

Speaking of confections, prior to the fight, Nietes was clear about his plan to eventually climb the scales again to challenge Roman Gonzalez and Juan Francisco Estrada, though the two just vacated their own titles to move up to super flyweight.