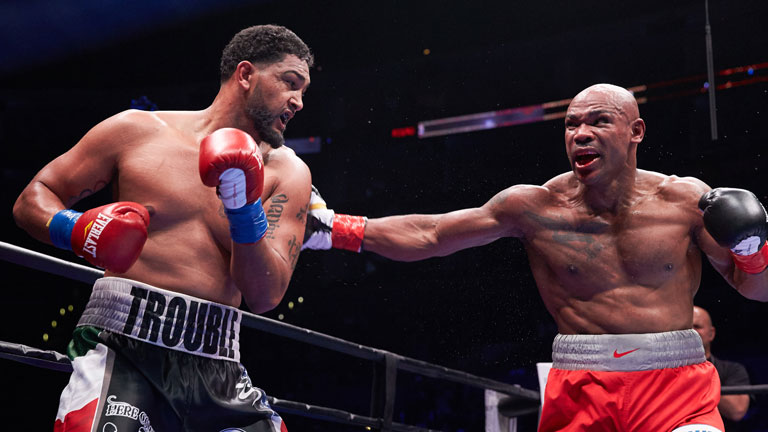 THE IBF relieved Tyson Fury of their heavyweight championship belt, and now allow Anthony Joshua to make his first defence against Dominic Breazeale. By that logic, I expect this guy to be something special.

A little investigation shows he’s probably not. He has a 17-fight unbeaten record, which on the face of it looks okay, but let’s take a closer look at his last three opponents. The last time out he fought the rather long in the tooth 43-year-old Amir Mansour [pictured above, Breazeale on left]. So long in fact he bit through his own tongue and was forced to retire after five rounds in a bout for the WBC Continental Americas title – the equivalent of the heavyweight championship of Scunthorpe.

Prior to that he fought Fred Kassi, who has an 18-4-1 record after losing to Hughie Fury at the Copper Box Arena this weekend. Kassi lost by unanimous decision to Breazeale – not all observers agreed with the decision incidentally – and drew with the 35-year-old Chris Arreola, but was knocked out by the aforementioned Mansour the fight before that. His third most recent opponent was Yasmany Consuegra who boasted an impressive record of 17-3, a BoxRec ranking of 227, and his 17 victims could boast a whopping 18 wins between them.

I must say, the path to the heavyweight title certainly seems to have got a lot easier as the years pass by, and this fight is most certainly not pay-per-view material. Most people would say Joshua deserves an easy first defence which in most cases is perfectly right but when has he had a hard fight? Dillian Whyte was a tester for him but not world class.

World class is Canelo Alvarez versus Amir Khan. I remember when this fight was first announced and I recall the majority of punters writing Khan off, but as the weeks have gone by and the media revs the fight up, spittles of information dribble through as to what Khan is doing in training or how he has put on so much weight, and instead of guessing how many rounds Amir will last, they are now telling us it will be a great fight and Khan might just do it.

Well, that’s the power of the media. When the fight was announced if you refer back to my blog of then, you will find I was one of the few that thought Khan was in with a great chance, now after seeing how he has put so much weight on, far more from the look of it than was necessary, I am not so sure. He was only required to weigh-in half a stone heavier than is normal, which over the time since the fight was announced would have been no hardship. Has the training regime of fattening one up and bringing him back down been at a price? Maybe a loss of some speed? Will his stamina be affected?

It still looks a good old fight but I need to give it a lot more thought now, I don’t think Khan needed to change anything, just rely on his God-given attributes.