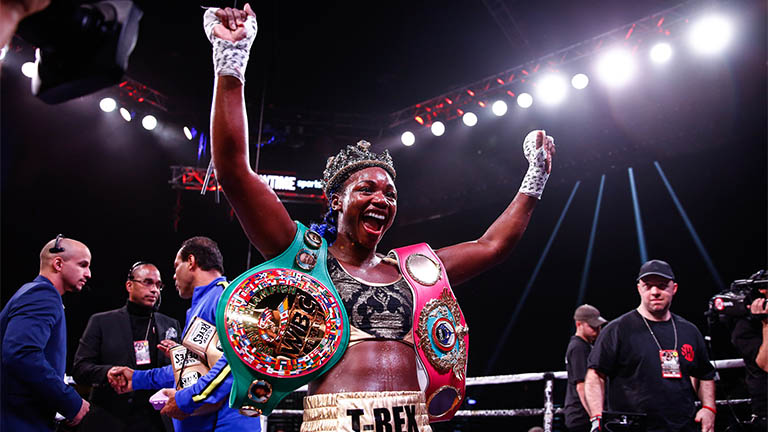 Claressa Shields and Ivana Habazin suffer in comparison to the sizzling war between Elin Cederroos and Alicia Napoleon-Espinoza. Nigel Collins reports from ringside

THE outcome of the Claressa Shields–Ivana Habazin bout was practically preordained. The poster for the fight read: “Her Story On The Boardwalk,” and it didn’t mean Habazin. It was, therefore, no surprise when united middleweight title-holder Shields dropped down to super-welterweight to garner the vacant WBC and WBO belts with a 10-round unanimous decision over outclassedHabazin at the Ocean Casino Resort (Salita Promotions).

Shields was scheduled to face Habazin on October 5 in Claressa’s hometown of Flint, Michigan. The match was cancelled after Habazin’s trainer, 68-year-old James Ali Bashir, was sucker-punched at the weigh-in by Shields’ brother, 28-year-old Artis Mack. He was arrested and is awaiting trial on the charge of assault with intent to do great bodily harm less than murder.

Although Shields dominated and won by wide scores of 99-98, 100-90 and 100-89, the rescheduled bout was not a particularly inspiring one. It was a sloppy affair marred by an abundance of mauling, pushing and clinching.

Shields displayed a reliable defence but only attacked in spurts. Her 30-year-old Croatian adversary had very little to offer other than courage and conditioning.

The best action came in the fifth and sixth rounds. Shields unleashed a flurry of scoring punches in the fifth that brought a roar of approval from her fans. They had even more to cheer about in the next round when the two-time Olympic gold medallist floored Habazin with a wicked right to the body.

“Andre Ward said, ‘Sis, take her to the body,”’ Shields said. “I was throwing all body shots in the first minute [of round six] and then boom, she went down.”

Habazin wore a look of agony as she pulled herself erect inside of referee Sparkle Lee’s count. Somehow she survived until the bell.

Perhaps recuperating from her all-out effort in the previous round, Shields allowed Habazin to bull her into the ropes in the seventh, where she hammered away at the body with little or no effect.

Shields stepped up the pace in the ninth and 10th rounds, letting her hands go with more urgency than before. Habazin, however, was determined to finish on her feet, grabbing and holding at every opportunity.

“I just want to become a better fighter. That’s all,” Shields said. “I want to grow women’s boxing. I want to share a card with Deontay Wilder and Errol Spence.”

The taller Cederroos is a well-schooled boxer with admirable footwork and an excellent left jab, with which she stung Napoleon-Espinoza repeatedly throughout the fight. She also snapped straight rights into her foe’s face on a regular basis.

Napoleon-Espinoza, from Linenhurst, New Jersey, connected with several hard blows to the head in the third before a rally by Cederroos edged a close round.

Late in the fourth round Napoleon-Espinoza backed her 34-year old Swedish adversary into the ropes and landed a series of head punches. What was shaping up to be a relatively easy win for Cederroos suddenly turned into a competitive fight.

The eighth was another close round. Napoleon-Espinoza landed the harder blows, while Cederroos connected more frequently. Every time one of them appeared to be pulling ahead, the other rallied back, much to the delight of the audience.

Napoleon-Espinoza suffered a cut over her left eye in the ninth, only to return the favour by bloodying Cederroos’s nose. That set the stage for a blood-smeared final round with both boxers trading at a rapid pace. It was a perfect ending to a splendid fight.

All three judges scored it 95-94 for Cederroos, which was slightly generous to Napoleon-Espinoza. The bout – refereed by Benjy Esteves Jnr – was supposed to lead to a showdown between Shields and Napoleon-Espinoza.

Judging by her performance against Napoleon-Espinoza, Cederroos would be a fine substitute but she laughed when asked if she wanted Shields next.

“I’ll go home to Sweden to get back in training,” Cederroos said. “I want more belts. I need to build up my name.” Her showing against Napoleon-Espinoza was a big step in that direction.

Undefeated Philadelphia welterweight Jaron Ennis had no difficulty dispatching mismatched Kazakh Bakhtiyar Eyubov in the fourth round of a scheduled 10-rounder.

Eyubov was in over his depth and Ennis tore into him with a barrage of non-stop combinations. Eyubov, who was four inches shorter than Ennis, was knocked down twice in the first round and took a beating in the second and third. When the onslaught continued in the fourth, referee Albert Earl Brown stopped the contest 38 seconds into the round. “He was a good fighter but wasn’t really that strong,” Ennis said. “I was getting hit a little too much but we were setting him up for power shots. I just had to calm down. I was too hyped. Once I calmed down and got into my rhythm, that was it.”