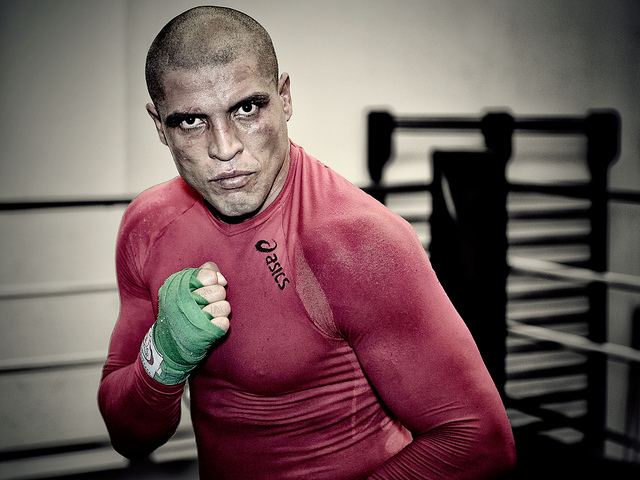 PERENNIAL contender Domenico “Vulcano” Spada, 38-5 (19), has been flying around the top of the middleweight division mountain for years, like an eagle scouting for prey.

Not unlike him, Martin Murray, 28-1-1 (12), has also been fighting at the highest level, coming out at the wrong end of questionable decisions, as the Italian did against former champion Sebastian Zbik.

Both lost their most recent WBC bids away from home and are back in the mix straight away. On their path to get to newly crowned champion Miguel Cotto, they must face each other in Monte Carlo on October 25.

Here, we find out what Spada has to say.

BN: We last saw you fighting in April in Marco Antonio Rubio’s backyard for the Interim version of the WBC middleweight title. You were the aggressor all the way, often trapping Rubio on the ropes and scoring effectively to the body, but from round five onwards you seemed to be in a hurry to close the match and your work became less accurate, until you got caught flush in the 10th and stopped. What happened there?

DS: I was leading the fight, as far as I was concerned, and winning but at the end of rounds four and eight, when the scores were announced, the judges had me down on points. I stepped up the tempo from the fifth. After the eighth, I still had plenty left in the tank to go the distance but I knew the only way to win was by KO. I abandoned my game plan and went for broke. Unfortunately, I got too careless and got caught.

BN: From your own experience, is open scoring good for boxing?

DS: Not at all. In my case, it was damaging and made it all go wrong. I learned my lesson in in the first Zbik fight: If they decide to rob you, they will. There is no point announcing it in advance. It kills the match.

BN: Would you fancy a rematch with Rubio?

DS: Definitely, as long as it is on neutral ground. I didn’t speak until after the fight, but things started going wrong way before the open scoring. There were issues from the weigh-in to the post fight anti-doping test but I will leave it at that. I am not looking for excuses. This last disappointment has only made me hungrier.

BN: What do you think of Murray’s fights against Felix Sturm and Sergio Martinez? Were the decisions fair?

DS: I think it was a home decision in both cases, and I truly felt for him. I hope he is coming to Monte Carlo to fight and that there will be no doubts whatsoever after the last bell rings.

BN: How do you rate him as an opponent and how are you going to deal with him?

DS: He is very awkward. I am not giving away my tactics, but, as in all my fights, you can expect high work rate and a fast pace.

BN: Where do you think a victory over Murray will place you in terms of world level objectives? Which belt are you going after?

DS: Naturally the WBC one, Murray being number one in their rankings. This should be an eliminator, really. But, I am open to all opportunities.

BN: With four different men holding titles, who do you rate as the real middleweight champion?

DS: Gennady Golovkin, by far. He is the real deal and the whole package, in every department. I don’t think of Cotto as a middleweight and GGG is head and shoulders above Quillin and Soliman.

BN: Who did you pick to win between Cotto and Martinez, when the fight was announced? Were you surprised with the result?

DS: I was indeed. I had Martinez winning hands down but it is obvious to me that his downfall was due mainly to age and injuries.

BN: What would you like to say to Martin Murray if he reads these words?

DS: Put a picture of me on your bedside table, look at it every night before you go to sleep, then remember that your wife is the one in bed next to you. Try to hug me like you did with Bursak for 12 rounds and I will knock you out. I am a fighter. I am coming to fight. Let’s give the fans a match for the ages.