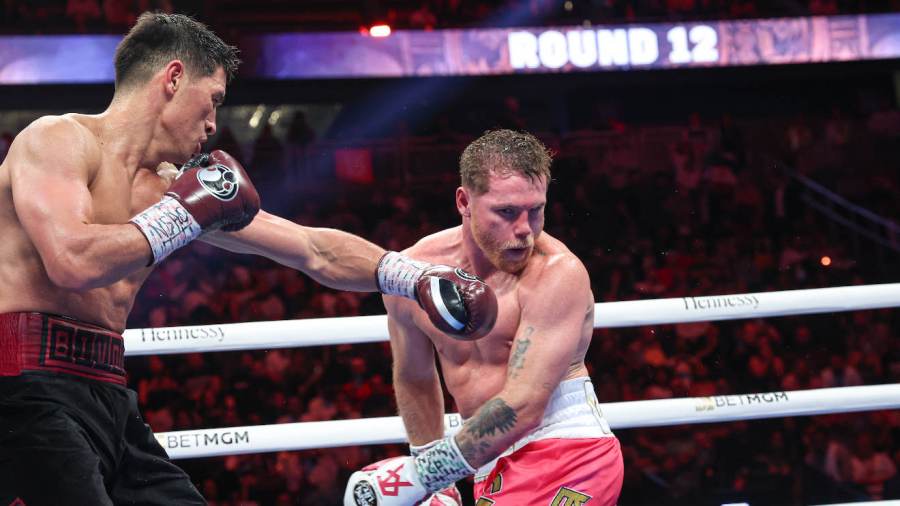 Light-heavyweight Dmitry Bivol defeats Canelo Alvarez in Las Vegas. Canelo has already spoken of a rematch but the size difference means he will remain out of his depth, writes Declan Warrington from ringside

Saul “Canelo” Alvarez had just produced his most impressive round – one that suggested he was finally turning his fight with Dmitry Bivol into one that would suit him – when he emerged for the start of the 10th.

Where it appeared he finally had a sense of momentum, the aggression and energy that defined how he had fought throughout the ninth vanished, and it instead transpired he had nothing left to give.

What followed was an exchange that largely defined what unfolded between him and Bivol – the natural light-heavyweight overlooked to such an extent that an agreement already existed for Alvarez-Golovkin III. Alvarez attempted to throw punches at the Russian while he remained by the ropes and then to retreat out of range, but where against so many previous proven opponents he would have succeeded, he was again punished by Bivol’s accuracy and reach.

On numerous other occasions Alvarez threw uppercuts and body punches like those that have tested so many. Bivol, like Alvarez aged 31 but significantly fresher in his 20th professional fight, routinely absorbed his power and rarely showed signs of slowing, contributing to the Mexican ultimately running out of ideas.

At Friday’s weigh-in and again at the opening bell, the size disadvantage Alvarez was confronted with demonstrated the extent of the challenge that was considered his greatest since his two bruising fights with the prime Gennadiy Golovkin of 2017 and 2018. The unanimous decision awarded to Bivol via three scores of 115-113 proved it was instead his greatest since losing for the first time to Floyd Mayweather Jnr in 2013, when by comparison he was not only young but naive.

Alvarez’s 61st fight – his experience has been instrumental in his cultured evolution – came at 175lbs when he had turned professional as light as at 140lbs. Those around him may have been complacent in not recognising the extent of Bivol’s abilities, but even when the time comes to reevaluate him ahead of the potential rematch “Canelo” has already spoken of, against the very best at light heavyweight, his size means he will remain out of his depth.