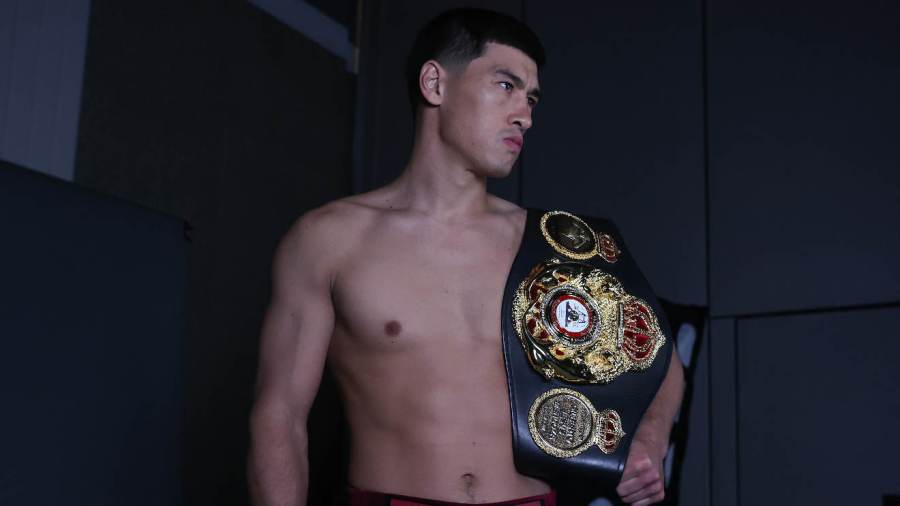 While other sports are sanctioning Russian athletes due to the war on Ukraine, Dmitry Bivol takes on boxing's most high profile star, Canelo Alvarez on Saturday. Declan Warrington reports from Las Vegas

“EVERYBODY wants a payday,” Saul “Canelo” Alvarez smiled when, days before he fights Dmitry Bivol at the T-Mobile Arena in Las Vegas, he was asked about yet another fighter calling him out.

If Floyd Mayweather Jnr possessed the same grace he could just as easily have given the same answer at any point between his victories over Oscar De La Hoya and Andre Berto, after which he ceased being an active fighter worthy of acclaim. Alvarez, like the once-great Mayweather before him, as the world’s leading fighter has also become his rivals’ biggest target, the money involved in facing him significantly greater than they can otherwise hope to make. It is largely why he moves so unusually between weight divisions, and also why, on the basis he wins for the 58th time on Saturday, a trilogy fight against Gennadiy Golovkin on September 17 has been made.

For the third time Golovkin, like Caleb Plant, Billy Joe Saunders, Amir Khan, Liam Smith and others both before him and since, recognises the biggest potential purse available to him comes in fighting Alvarez. Even as a bigger underdog than ever, when, at 40 he has declined, it is difficult to argue that it’s not also the fight for him that makes the most sense.

The undefeated Bivol, like Alvarez 31, is the Mexican’s latest opponent in mostly similar circumstances – the fighter being rewarded with the highest profile fight and, as the titlist, a career-high purse of a reported $2m. Only, unlike Caleb Plant, Billy Joe Saunders, Amir Khan, Callum Smith, Golovkin and numerous other potential opponents, he is a Russian being rewarded at a time when other sports are sanctioning Russian athletes in an attempt to support Ukraine.

Since the Russian invasion of Ukraine that has devastated millions, the morally dubious UEFA and FIFA have suspended Russian club and international football teams from their competitions. The World Athletics Council has acted similarly; The All England Club has banned Russians from competing at Wimbledon; even the International Olympic Committee had urged sports bodies to impose similar bans.

In professional boxing, however, Bivol – who it is important to recognise has not once condoned the war his country started – has been given his biggest ever platform, and can potentially secure one of Russian boxing’s finest ever wins.

He is widely recognised as one of Alvarez’s two biggest threats – his compatriot Artur Beterbiev is the other, and Beterbiev’s latest fight, against Joe Smith Jnr in New York, was officially confirmed on the same day Bivol insisted sports and politics shouldn’t mix.

“I am in sport so I don’t know about coronavirus or politics,” Bivol said. “Most boxing fans just want to see the light-heavyweight [titlist] against the pound-for-pound king.

“When I heard about the war, and even if it is in Vietnam or Iraq, it’s sad for me. We are people. We have to make a better world for all of us. Of course it’s sad.”

There should perhaps be no sporting community more aware of what is happening in Ukraine, given the prominence and bravery of Wladimir and Vitali Klitschko in speaking about fighting to defend their under-siege country, Vitali’s status as mayor of Kiev, and the recognition of Vasiliy Lomachenko’s attempts to do the same.

Eddie Hearn, who is promoting Alvarez-Bivol, also next week hopes to finalise the rematch between Anthony Joshua and Ukraine’s Oleksandr Usyk in July. Usyk had committed to the same cause as his compatriots, but negotiations have progressed since his country gave him permission to leave.

“To isolate Russia from all sporting competition is not an act of aggression,” Wladimir Klistchko had said. “We do this to stop the war, in the name of peace. I have nothing personal against the athletes, but I have a lot against the aggression of Russian leader [Vladimir] Putin.

“We believe sanctions on different levels, including sport, are crucially important. If you take away sporting competition, the athletes will ask their leader, ‘Why will nobody compete against us?’”

“I don’t think too much about the Russian fighter,” Hearn, who also said Usyk’s team have not opposed Alvarez-Bivol, told Boxing News. “Dmitry Bivol is a client, and a friend, and also a man of peace. He’s dedicated his whole life to this opportunity.

“When we made this fight, there was that talking point. We had to speak to him, the WBA, and MGM, and there was a very clear policy with the WBA – no flags, no anthems, nothing like that.”

Eddy Reynoso, Alvarez’s trainer, insists he and his fighter feel similarly. “Perhaps the political environment might just be there a little bit, but [Saul] really doesn’t know that,” he said. “He just knows he has to provide good fights for the Mexican public.”

Alvarez himself said: “I always try to win, no matter what. Russian or no, I always come to win.”

Klitschko’s words were put to Bivol, who once met Russian president Vladimir Putin back in 2013, and he said, without a dismissive tone: “He’s political. He doesn’t have to watch.”

Bivol moved to St Petersburg from Kyrgyzstan aged 11. His family remains there, and he will return to his home there in the days after Saturday’s fight. “We all have to be proud of where we’re from,” he said. “It doesn’t matter if it’s from Kyrgyzstan [my mother’s home after she was born in Kazahkstan], Moldova [like my father], Africa, England. I understand why I am without a flag here. No problem. I’m a sportsman. I am focused on the fight.”

He will not only enter the ring on Saturday without a Russian flag or hearing his country’s national anthem played – his father will not even be present, because of his inability to secure a visa from the authorities in the US.

“Maybe I understand a little bit [why people don’t want this fight to happen],” Alvarez said. “But we are here, right?