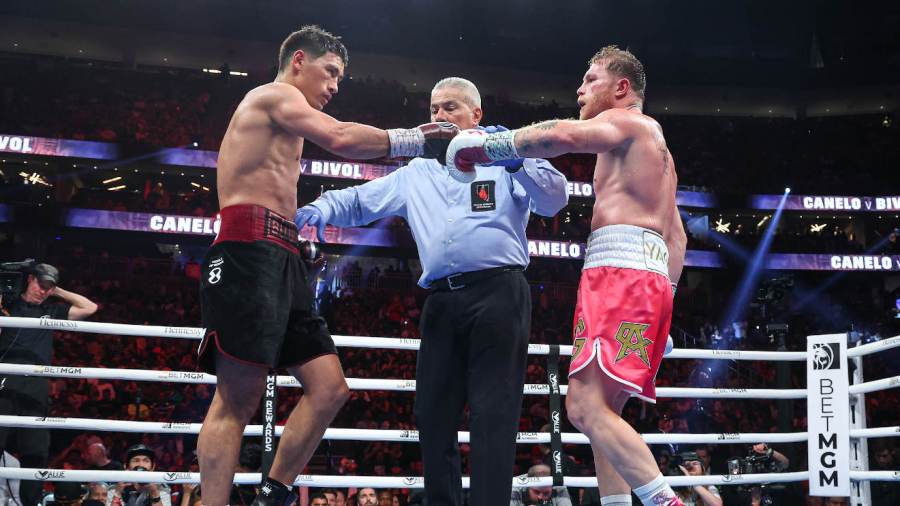 DMITRY BIVOL won two fights on Saturday night. The first was broadcast to millions around the world, the neon glare of the Vegas strip examining his every move against a modern great in Canelo Alvarez. The second, however, had an audience of just one. It took place deep in the recesses of his psyche, with a voice he refers to as the ‘little man.’

“It was one of the biggest challenges for me,” he told Boxing News. “To fight against the biggest name in boxing I tried to think, ‘No, it’s not the biggest name. It’s just another fight, just another defence.’ It was really hard work with my mind. Because every time the little man inside my mind said, ‘Hey, you can lose no problem! All the people are against you!’ But I said to him every time, ‘No, no! This is my belt! This is just another boxer, believe it!’ And I believed. Every time I spoke with this little man it was like two battles. Every time you have a big fight you have this small man inside of you getting bigger.”

Reaction to Bivol’s assured victory has largely been one of surprise yet the undefeated Russian had remained coolly confident throughout the build-up, his trust in the game plan his team had devised unshakable. Executing it effectively was, he says, down to a mixture of discipline, control, and using his opponent’s aggression against him.

“Control him with my left hand and don’t come to him too close on the ropes. Don’t be close because he can counter-punch. And waiting for him when he beat my arms, my blocks, to waste his power. I tried to waste his power. When he threw hard punches he wasted his power for a couple of seconds and this was my moment to throw punches back. I felt I controlled every distance, long and short.”

Triumph in the biggest fight of his life revealed a new side to Bivol, his icy exterior making way for a beaming smile and a sharp wit. When asked about the punishment Canelo had dished out to his arms (a tactic he’d used to great effect against Britain’s Callum Smith) the Russian brandishes the bruises but shrugs and replies, “It’s better than if he punched my head.”

He then cheekily took pleasure in teasing Eddie Hearn about ruining his promoter’s plans for a third Canelo vs Golovkin fight.

“Eddie Hearn? He’s happy… but not too much! I think in every way it’s good for boxing fans and for boxing. Sometimes an upset is better. Why not? I made a big statement about me. I see it on my Instagram, my followers went up. I like it. I wanted a big fight for many years and I got it.”

After an arduous training camp at Joel Diaz’s gym in Indio, California, a long awaited reunion with his family in St Petersburg now awaits. Neither Bivol’s wife nor his mother can bring themselves to watch his fights live but on calling them to break the good news they were quick to praise him for the manner in which he has carried himself throughout his boxing career.

“They are proud of me. They are happy. They said, ‘You deserve it.’ Every time people ask, ‘Why are you so humble? Why don’t you talk trash? People don’t know you if you don’t do it.’ I said every time, ‘I want to be myself. I want to be how I am. People will know me as a good boxer. And I hope that one day I will achieve this.’ Maybe that was last night.”

As ever in prizefighting the chance to bask in one’s achievements is short-lived as rumours of rematch clauses and future challenges quickly circle. Canelo immediately confirmed post-fight that he would be activating his rematch clause and Bivol appears more than happy to oblige. He suggested, however, that fighting the Mexican down at super-middleweight would be particularly intriguing to him.

“It’s interesting. Yes, we will talk about it. Four belts at 168lbs is good. I will try to think about it, if they want. But I don’t know what they want. I think we all need time, his team needs time, my team needs time, and boxing fans need time.  I don’t have any problems. I think I can make 168lbs. Before the lockdown with coronavirus I was pretty sure that I can make it but after I grew my belly. I raised my fat.”

Once rested and returned to his loved ones Bivol will switch to eager spectator and turn his attention towards the clash between Artur Beterbiev and Joe Smith Jnr on June 18. He has made no secret of his desire to fight his compatriot, Beterbiev, in a mouth-watering contest that would confirm to the world who the number one light-heavyweight on the planet truly is. Yet the nature of Bivol’s performance on Saturday night has left him wondering whether he’ll be an even less attractive proposition for the division’s best competitors.

“I think Beterbiev has a better chance [of beating Joe Smith Jnr]. I’ve said it before, I want to be the undisputed champion. I want four belts. It’s one of my dreams. But I’m not sure that everyone wants to fight me after I beat Canelo.”