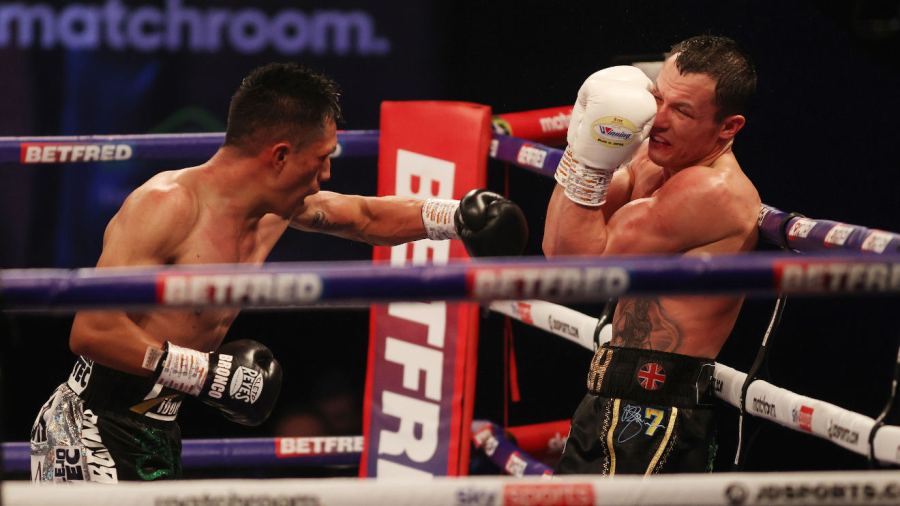 BOXING returned to these shores for the first time in 2021 but the drama served up inside the empty Wembley Arena late on Saturday night (February 13) is unlikely to be topped before the year is up. Josh Warrington, the previously undefeated No.1 featherweight in the world, was dropped and stopped by unheralded Mexican Mauricio Lara who made a mockery of his 10/1 odds to produce one of the bigger upsets seen in a British ring in decades.

This was supposed to be a straightforward victory for Warrington, who vacated his IBF title in order to take care of Lara and then press ahead with plans to fight either Can Xu or Gary Russell Jnr this year. Instead, the fractured jaw sustained at the heavy hands of his unforgiving visitor will keep him out for the best part of what’s left.

This was Warrington’s first fight since October 2019 when he blew away Sofiane Takoucht in a world before Covid. The pandemic has been to blame for his extended absence while Lara had boxed five times over the same period.

Ring rust might have been a factor for Warrington who struggled to find any early rhythm. He was also not helped by the absence of his adoring legion of fans who have become as synonymous with Warrington as he has with Leeds. This time, he boxed in silence.

The first round was nothing short of bizarre. Warrington landed almost immediately with a big right hand and a body shot but he did not take advantage. Instead the plodding Lara seemed to have success with both hands to head and body. It was obvious that Warrington was failing to find a stride which merely invited more pressure from the 22-year-old underdog, who was taking part in his first ever scheduled 12-rounder.

The second and third followed a similar pattern but everything changed dramatically with a minute to go in the fourth. It started when Lara landed a huge left hook which sent Warrington staggering back to the ropes. Lara, roared on by his corner team, piled on the pressure and eventually downed the former champion with another left hook.

He was on unsteady legs when he rose to his feet at five and he was still in serious trouble when referee Howard Foster allowed Lara back in again. The last 23 seconds of the round were just pure survival and on another night Foster might have stepped in there and then.

But Warrington made it back to the corner and his father-trainer Sean O’Hagan opted to send his boy back out for the fifth. At this point, it is difficult to overstate the heart and resilience shown by Warrington over the next four rounds. For the most part he was absolutely out on his feet and still trading with a man looking for the finishing shot every time he threw. It was, at times, hard to watch.

The end came after 54 seconds of the ninth, when Lara finished yet another vicious flurry with a right hook to the body and then a left hook to the chin, which left Warrington sprawled flat on his back. “That’s it,” said Foster who did not bother with a count.

Lara cut short his celebrations to beckon in the ringside paramedics and doctors who surrounded the Leeds Warrior and administered oxygen. In the eerie silence of the Arena, it was a stark reminder of boxing’s brutality.

“It just numbs you,” his promoter Eddie Hearn said later. “When I went backstage I could hardly stand up. But that’s why it’s the greatest sport in the world because nothing can make you feel like that.

“People are saying it was ring rust, there’s no crowd… no. It was Lara. Give Lara credit. A 22-year-old man changed his life. It was a devastating defeat for Josh Warrington and first thing’s first, let’s make sure he is alright. He will be back but it shows you how the sport can spin on its head.”

Warrington was taken straight to hospital afterwards but headed home to Leeds in the early hours after a brain scan came back clear. He arrived back home in time to celebrate his twin daughters’ third birthday.

In the chief support, yet more rancid scorecards totally overshadowed an entertaining fight between Manchester’s Zelfa Barrett and Spanish veteran Kiko Martinez. The bull-like Martinez, the much smaller man, spent the majority of the fight on the front foot, ducking low beneath Barrett’s attacks before winging over the top with counters.

It seemed as though the former super-bantamweight world champion’s industry and success was enough to secure a victory against the odds but Foster had it 116-113 to Barrett while Steve Gray and Bob Williams both inexplicably turned in scores of 118-111. Social media erupted and so too did Hearn. “118-111 is absolutely disgusting for Kiko,” he said. “He might as well have not bothered.” Plus ca change. Boxing News scored the bout 115-113 for Martinez.

Elsewhere Nottingham’s Leigh Wood survived an almighty scare in the third round against Leeds man Reece Mould before roaring back to force a brutal stoppage after 1-03 of round nine to claim the vacant British featherweight title. Williams waved it off without a count.

After three rounds of one-way traffic from Sheffield’s Dalton Smith, the corner of Ishmael Ellis, the Birmingham super-lightweight, decided to pull their man out to spare him any more punishment. Gray refereed.

Earlier Leeds starlet Hopey Price maintained the perfect start to his professional career by dominating Nicaraguan Daniel Mendoza over six rounds with Williams scoring it a 60-54 shut-out while in the first fight of the night, Ibrahim Nadim of Keighley moved to 3-0 by virtue of Williams’ 60-55 scorecard following six uneventful rounds with Sandhurst’s Jonny Phillips.

The Verdict One of the most stunning results in recent years. An upset for the ages.