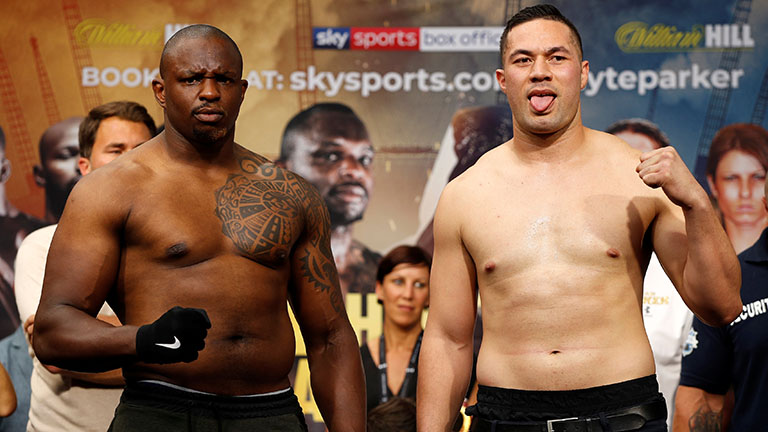 Dillian Whyte vs Joseph Parker fight time and where to watch it. Jack Figg has the details

Heavyweights Dillian Whyte and Joseph Parker battle it out this Saturday (July 28) at the O2 Arena, London, live on Sky Sports Box Office.

Here is all you need to know about Saturday nights event:

12 three-minute rounds in the heavyweight division.

The main event is expected at around 10.45pm.

Whyte (23–1, 17 KO’s) is on a seven fight win streak since his sole career loss against Anthony Joshua in December 2015, while Parker (24-1, 18 KO’s) owns only one loss, coming against ‘AJ’ in his last bout in March when he lost his WBO world title. A win for either man puts them in right at the top of the pile for a shot at either Deontay Wilder or Joshua, once that saga reaches a conclusion.

Taylor (9-0, 4 KO’s) competes in her fourth title fight in only her 10th bout since debuting in November 2016. Having picked up the WBA title in October 2017 beating Anahi Sanchez, Taylor added the IBF strap two fights later with a victory over Victoria Bustos. Taylor defends her two belts together for the first time against American Kimberly Connor (13-3-2, 5 KO’s), a former IBF world title challenger who came up short in 2011 losing to Amanda Serrano.

Chisora (28-8, 20 KO’s) got back to winning ways with a victory against Zakaria Azzouzi (14-3-2, 10 KO’s) in March, having previously lost to Agit Kabayel in November 2017 for the European heavyweight title. Takam (35-4-1, 27 KO’s) was last seen taking Joshua 10 rounds in October 2017, despite a loss the Frenchman came away with much credit and his stock raised, ultimately putting him in line for bigger fights.

A rematch from their December 2017 York Hall barnbarner which saw Benn (12-0, 9 KO’s) come back from two knockdowns to floor Peynaud (6-5-3, 4 KO’s) twice ultimately earning a points decision victory. The fight was intense and closer than the scorecards read, therefore leading to Benn wanting to prove himself with a more convincing win over his French rival.

Alen (13-4-2, 10 KO’s) competes for the first time since his June defeat against Olympic super-heavyweight gold medalist Tony Yoka in France. Webb (12-0, 10 KO’s) is faced with his biggest test yet as the two battle it out in a British title eliminator.

Buglioni (21-3-1, 15 KO’s) competes for the first time since dropping the British title against Callum Johnson in March, his comeback opponent Feuzeu (10-7-2, 4 KO’s), is a former WBC Latino light-heavyweight title holder, and will compete in the UK for the first time.

Former GB Olympian Fowler (6-0, 5 KO’s) looks to keep up his high knockout ratio which he has maintained since his May 2017 debut, but his opponent O’Brien (8-0, 0 KO’s) is undefeated.