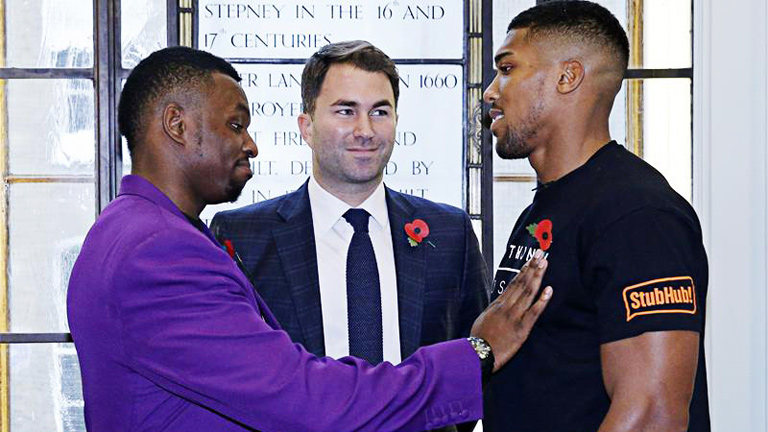 Dillian Whyte and Anthony Joshua trade barbs ahead of their fight

AS his December 12 fight with Anthony Joshua approaches, Dillian Whyte has given his prediction over how the contest will go.

The pair will meet at a sold out O2 Arena in London for the Commonwealth and vacant British heavyweight titles.

Whyte, who beat Joshua while the pair were novice amateurs, insists he will repeat the trick and do so inside the distance.

“It’s probably going to be the hardest fight of my career, we’re preparing for 12 hard rounds but I don’t think it’s going 12 rounds,” he said.

“He’s somebody I’ve beaten before. I’m just as powerful, if not more powerful. I beat him once and I’ll beat him again, doesn’t matter how much he’s improved.”

Joshua is yet to be taken beyond three rounds by an opponent in 14 fights as a pro, but Whyte believes the men he has been beating are below par.

“I’m not one of the old men he’s fought in his last 14 fights,” he continued.

“The average age of his opponents is something like 38 or 39. I’m young, hungry.

“In between the sixth and the eighth round he’s going to get knocked out. I want it to go long. I’m going to take a bit of time.”

While Joshua feels that Whyte could well take him further into a fight than he’s been before, he foresees a different outcome.

“It’s another step up the ladder, the British title especially, no matter if it was Dillian or someone else,” he said.

“I approach this with the same hunger and attitude I do for all my fights but this one has a little extra to it with all the trash talking and the attention so that gives us a bit more incentive to prepare for a 12 round war rather than me going in there knowing that it may not go the full distance.

“This fight has the potential to go the distance, Dillian could be the man to potentially take me past three rounds.”

When probed on what changes he and Whyte have made since their amateur bout, Joshua gave a somewhat surprising answer.

“Dillian will step in the ring, I’ll get the result and then it’ll be the next man talking about beating me. Once I get past Dillian I’ll hear the next person come and say they’ll beat me. That’s why Dillian’s here, to give me a young, hungry opponent and the British title on the line. Then it’ll be onto the next man.“