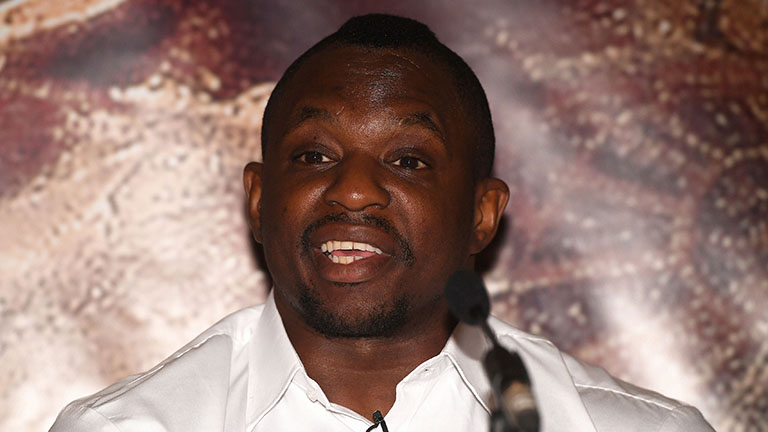 DILLIAN WHYTE has slammed Tyson Fury’s choice of opponent for his comeback fight in Manchester tonight.

Of Sefer Seferi, says Whyte, “That’s garbage. I understand he’s been out for a while and I understand he needs to make a comeback. But that’s garbage. He could have fought the likes of Joey Abell. There’s better guys than that he could have fought. There’s guys that will give him a better challenge than Sefer Seferi. That’s a piss take to boxing fans. There’s better guys he could have fought. There’s gatekeepers and journeymen that’s better. Fight a heavyweight. He doesn’t even need to be a dangerous guy, just look the part. Why have you got to fight an old cruiserweight, who’s brother is number one [in Albania] and he’s number two and he’s a promoter?”

“You don’t come back and fight Sefer Seferi or whatever his name. There’s better fights you can have than that.”

Whyte revealed that he tried to get a September fight with Fury himself. “We tried to make the fight with him September this year. He’d have had two warm up fights before then. But he’s turned it down and rightly so because he understands he’s been off, his timing’s gone. He believes that he needs more time. Rightly so. I respect that and I understand that but don’t go round shouting and screaming you’re the best heavyweight, you can beat this guy, you can beat that guy and then you don’t want to take the fights,” Dillian said. “Just leave it. Stay in your lane until you’re ready to overtake.”

He knows Fury well, the two of them used to be sparring partners in fact. He believes he knows how to beat Fury. “I used to spar Tyson loads in our early career,” Whyte said. “He’s big and he’s awkward. He’s not the strongest of guys. He’s awkward and he can cause problems because of his awkwardness. There’s a way you deal with that. You put the hurt on him early, he gets hurt to the head and to the body. But he’s tough, he gets up, he shows courage but he hasn’t been nailed by a true heavyweight. He’s been nailed by smaller guys and he’s got up. But if a true heavyweight is nailing him aggressively to the head and to the body, it would be a different story. And he knows that. That’s why he needs a year or more before he fights anyone decent. That’s the thing. I believe there’s guys he could have come back and fought. Even Dave Allen would have been better than Sefer Seferi.

“I think it’s disgraceful. I know I’m going to get slated for saying this because Tyson Fury fans are very hypocritical. But there’s a level and I believe that you have to respect that level.”