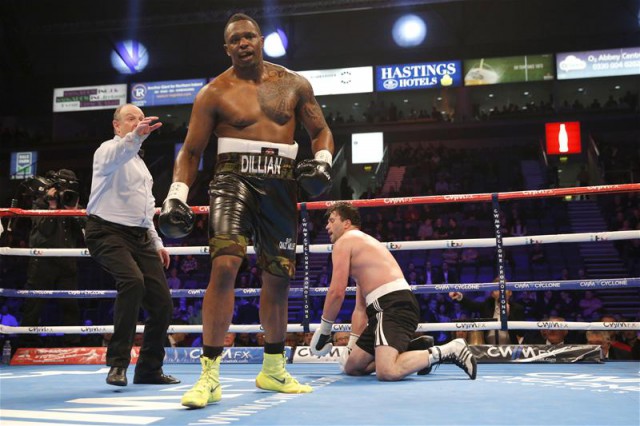 Whyte tells George Gigney he is 'ready to knock somebody out'

DILLIAN WHYTE plans on impressing when he fights Irineu Beato Costa Junior at the KC Lightstream Stadium in Hull on Saturday [August 1].

The unbeaten heavyweight takes on the 34-year-old Brazilian on the undercard of Luke Campbell’s grudge match with Tommy Coyle.

Costa Junior’s four professional losses have all come in his last six fights, including a sixth round stoppage loss to David Price in February, and Whyte hopes to do a better job than his countryman.

“It’ll be a big crowd, I think the show’s sold out already. I’m in good shape, I’m ready to go out there and knock somebody out,” he told Boxing News.

“I’ve watched a few of his fights. He’s a big guy, a tough guy, he’s got a lot of knockouts to his name but at the end of the day he’s there for me to beat, I’ve just got to try and do it quicker than David Price did.

“I just want to go out there and put on a good performance, I’m not trying to make a statement, I’m just trying to progress my career and do what I need to do so I’ll just go out there, listen to my coach and do what he tells me to do.”

Whyte last boxed in February on the Carl Frampton-Chris Avalos undercard in Belfast, but a minor hand injury stalled his progression since.

Whyte, 27, is set to face old amateur rival Anthony Joshua later this year for the vacant British title, but insists he feels no strain to build up that clash with his performances.

“I don’t feel like I’m under any pressure, I’ll just go out there and do my thing,” he said.

“I’ll just do what’s best for me. If that means doing some rounds or just knocking somebody out, I’ll do whatever my coach thinks is best for me.

“At the end of the day, I’ve had 14 fights, I’ve never been past four rounds so if I go out there and do the full eight rounds or I go six rounds, or five, that’s new territory for me.