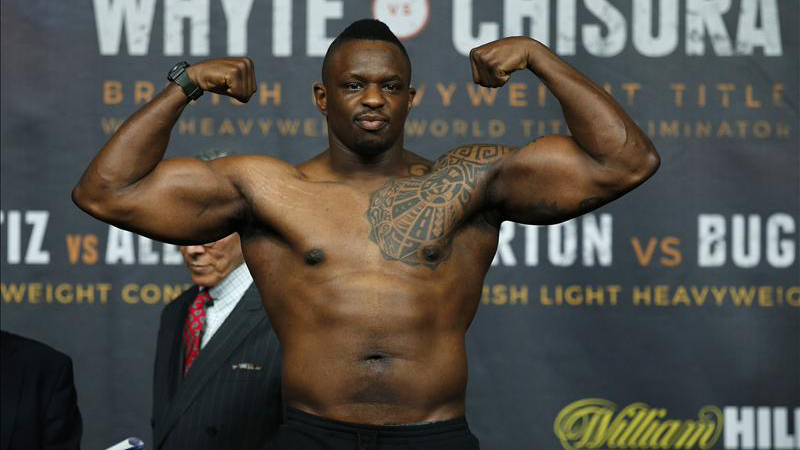 Unfazed Dillian Whyte needs to get past Dereck Chisora to stay on the road to a 2017 world title fight, writes John Dennen

DILLIAN WHYTE will not defend his British heavyweight title but Saturday’s fight with Dereck Chisora goes ahead. After hurling a table at Whyte at a press conference this week, Chisora nevertheless escaped from a ban but was handed a hefty £25,000 fine from the British Boxing Board of Control. The two took to the scales separately at today’s weigh in, where Whyte was 246 1/4lbs and Chisora 250 1/4lbs, and they will be kept apart until the tomorrow’s contest at the Manchester Arena.

Whyte had remained calm when the table went flying. Speaking to Boxing News today, he said, “I was just sitting there chilling. I was like, ‘Chisora’s lost the plot,’ trying to throw a tantrum, trying to intimidate me and get in my I head. I ain’t scared of that. I’ve seen worse things thrown towards me. I’m not going to hide and jump from a little table thrown at me, no.

“I don’t like no one taking liberties with me. I show everyone respect and I back down when I need to back down.”

It will still be a WBC title eliminator and Whyte expects to fight for a world title next year. “We’re going to wait and see what happens,” Dillian said. “He [Deontay Wilder, the WBC champion] is a good fighter. He’s a good champion, undefeated. He carries a punch and he seems to be getting better and better. I’m in the game to fight all the best. That’s what I want to do, I want to fight these people. I want to fight these people. If we could do it here next year on Sky Sports at one of the football stadiums or something with another big fight on the card that would be amazing.

“Next year all I’ve got to do is keep winning these fights.”